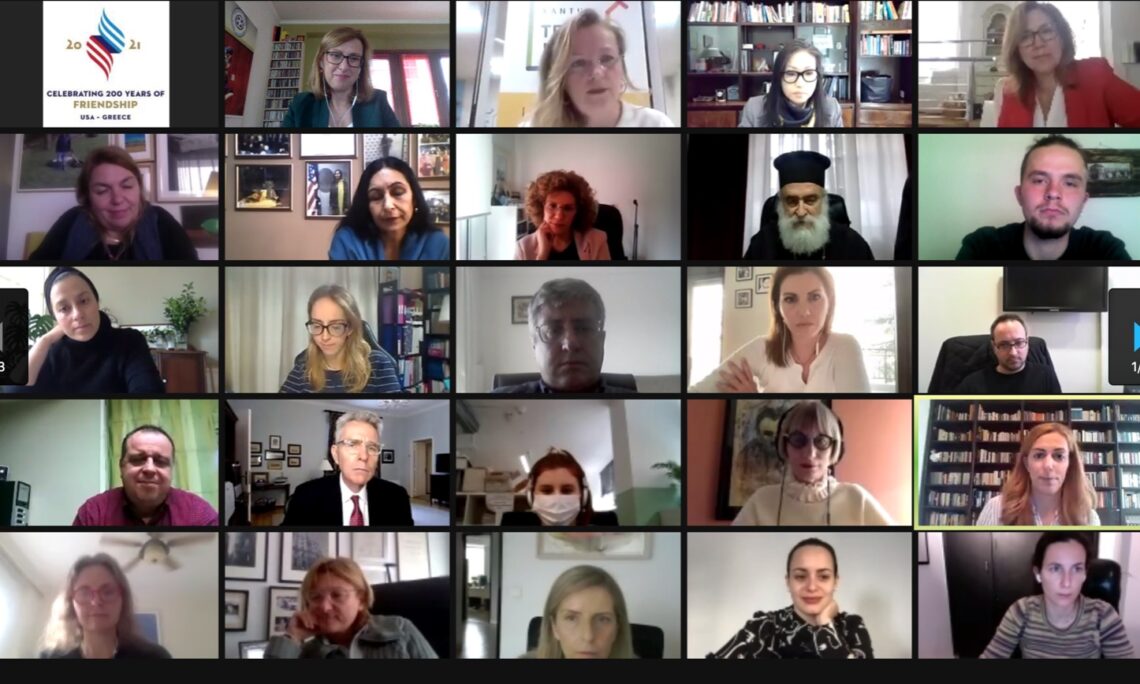 Thanks, Liz, and “Kalispera” to everybody.  It’s such an honor for me to join you today as we commemorate International Women’s Day.  We really wanted to come together today to honor our nominee for the State Department’s recognition.  And as Liz said, I’ll have a little bit more to say about Emine Buruci as we continue on this afternoon.

But let me start by saying what a real treat it is to see so many familiar faces on both of the screens.  I’m glad to see everybody is healthy and well, and to have so many really stellar representatives of Greece’s women’s groups, human rights NGO, our partners from civil society, the media, friends from here in Athens and as far away as Alexandroupouli, and I particularly want to recognize the presence of His Eminence the Metropolitan of Xanthi, who I see right in the middle of my screen, so thank you for joining us.

I was able to kick off Women’s History Month last week by catching up with two great friends of the Embassy, May Zanni and Maria Gianniou, the founders of Women Act.  Women Act launched four years ago with the great idea of empowering Greek women to participate in the public sphere, and since then, I have to say how much I’ve admired seeing their growth as a political force, but also their expansion across the country, including the branch that was launched in Thessaloniki in late 2018.

And I was really delighted when May told me that Women Act now plans to expand their work and their network up to Alexandroupouli, so she’ll have a little to say about that in a few minutes.  I’ve visited Alexandroupouli five times because we see this as a strategically positioned city which is becoming an important regional energy, transport, and commercial hub, so it makes complete sense that Women Act wants to support women leaders there who can participate in political life at this important moment in the region’s evolution.  We’ll have a message from her in just a few minutes.

For many, many years, the U.S. Embassy and U.S. Mission in Greece have supported programs to advance gender equality and women’s empowerment.  March 8 is an important date on our calendar every year – a moment to reflect on our shared accomplishments and to discuss goals for the future.

This year, however, feels different, because the pandemic has changed all of our lives, particularly the lives of many women who have carried disproportionately the challenges of homeschooling and child-care in addition to professional demands.

This year, March 8 arrives as Greece is in the midst of a national debate over sexual harassment.  Like many of you on this call today, I’ve been heartbroken to hear some of the stories that have come out.  I really want to commend the courage of those who have stepped forward to speak out, and I want to acknowledge the many Greek political leaders, led by President Sakellaropoulou and Prime Minister Mitsotakis, who have made public commitments to be leaders for change in this area.  We have grappled with these same issues for decades in the United States, so I appreciate how challenging they can be, but I can also say with confidence that we’ve seen progress is possible when dedicated individuals like all of you and elected officials commit to taking action.

Thank you to everyone for taking a few minutes from your day to celebrate our shared commitment to empowering women and lifting up women’s voices in all sectors of our societies as we work towards a better future, one defined by greater equality, greater opportunity, and greater prosperity and fulfillment for all.

And since this is the year and the month of Greece’s bicentennial, I also want to spend just a moment to talk about Greek Independence Day.  This year, we are helping to commemorate Greece’s bicentennial and the 200 years of friendship between our two countries.  It’s our top public diplomacy priority.

A little-known aspect of the Greek War of Independence is how it inspired many American women to participate in the Philhellenic movement back at home in the U.S., and to push for greater political participation in our young country.

During the 1820s, many American women became involved in Philhellenic societies throughout our young country, raising money and provisions to help Greece reclaim its birthright of democracy.  They saw aid to Greece and to Greek women as an extension of their role in preserving the moral integrity of their families and communities.  Philanthropists like Emma Willard helped to establish schools in Greece to educate Greek women.

Through their aid to the Greek people, women came to recognize the inequalities in the United States as well and sought to advance their own position.  Historians have linked American women’s involvement and achievements in the Philhellenic movement as a source of motivation behind the suffrage movement in the United States.  It took almost a hundred years more and several generations of women’s advocacy, but women’s right to vote was eventually granted through the 19thAmendment to our Constitution in 1920.

All of those efforts paved the way for women leaders like our Vice President Kamala Harris, the highest-ranking female elected official in U.S. history, and President Sakellaropoulou, the first female president of the Hellenic Republic, both of whom are examples of how our democracies continue to progress.

I’ll say just a couple of words about the State Department’s International Women of Courage Award, which Liz already addressed.  I’ll start by emphasizing, the United States is committed to championing gender equality and advancing the status of women and girls at home in the U.S. and around the world.  And one way that we do that each year is by honoring women through the Secretary’s Award for International Women of Courage.

The award honors women who have demonstrated exceptional courage, strength, and leadership in acting to improve the lives of others.  It is an opportunity to bring international attention to and to support women who have put their lives at risk in order to improve their societies and inspire their fellow citizens.

This year’s winner from Europe is Maria Kalesnikava from Belarus, who helped to mount a historic challenge to the 26-year rule of Alyaksandr Lukashenka ahead of last year’s presidential election.  Despite her detention in the aftermath of the disputed election, Maria continues to keep the democratic movement alive inside Belarus and is a source of inspiration for all those seeking to win freedom for themselves and their countries.

Since its establishment 15 years ago, the State Department has recognized more than 155 remarkable women from over 75 countries with this award.  These women have been harassed, imprisoned, and even threatened with death for standing up for justice, human rights, constitutional reform, and the rule of law—principles which form the backbone of our democratic societies.

So it’s my great honor today to recognize Emine Buruci, who we proposed as our nominee for this year’s International Women of Courage Award.  Emine has been a fearless human rights activist for the Pomak community in Greece for many years, seeking to increase access—particularly for women—to education and training.  She has also promoted economic inclusion for Thrace’s Pomaks and the wider Muslim community.

She founded the Cultural Association of Pomaks of Xanthi, an association that educates its members in traditional Pomak language and culture and organizes Pomak cultural events with support provided by the Greek Ministry of Foreign Affairs.  Her work has touched on the lives of thousands of Pomaks and enabled women in her community to overcome significant challenges and deeply ingrained stereotypes.

She has led programs to promote the employability and well-being of Pomak women, organized evening classes for women to learn job skills, lobbied public officials to improve basic infrastructure, and spearheaded a range of activities aimed at helping women gain economic independence.  She has also brought specialists to villages to help women suffering from depression and other health problems.

Our Embassy team and the Consulate have known Emine for several years and have been exceptionally proud to lift up her efforts.  To recognize her contributions, vision, and personal sacrifice, we nominated her for this global recognition.

The theme of this year’s Women of Courage competition was “Courageous Women Inspire a Better World.”  This certainly describes Emine, whose selfless work has improved the lives in her community, inspiring us and, I hope, many of her fellow Greek citizens.

Now I’d like to give Emine some time to speak, and I hope that you all will join us at 5:00 p.m. today for the State Department’s virtual International Women of Courage event that will be hosted by Secretary of State Blinken and our First Lady Dr. Jill Biden, a great friend of Greece who was last here in Athens and out on Chios in 2017.  And they will recognize the several finalists who were nominated from around the world for this award.  Ευχαριστώ πολύ, and thank you to everybody for your contributions to this noble effort.