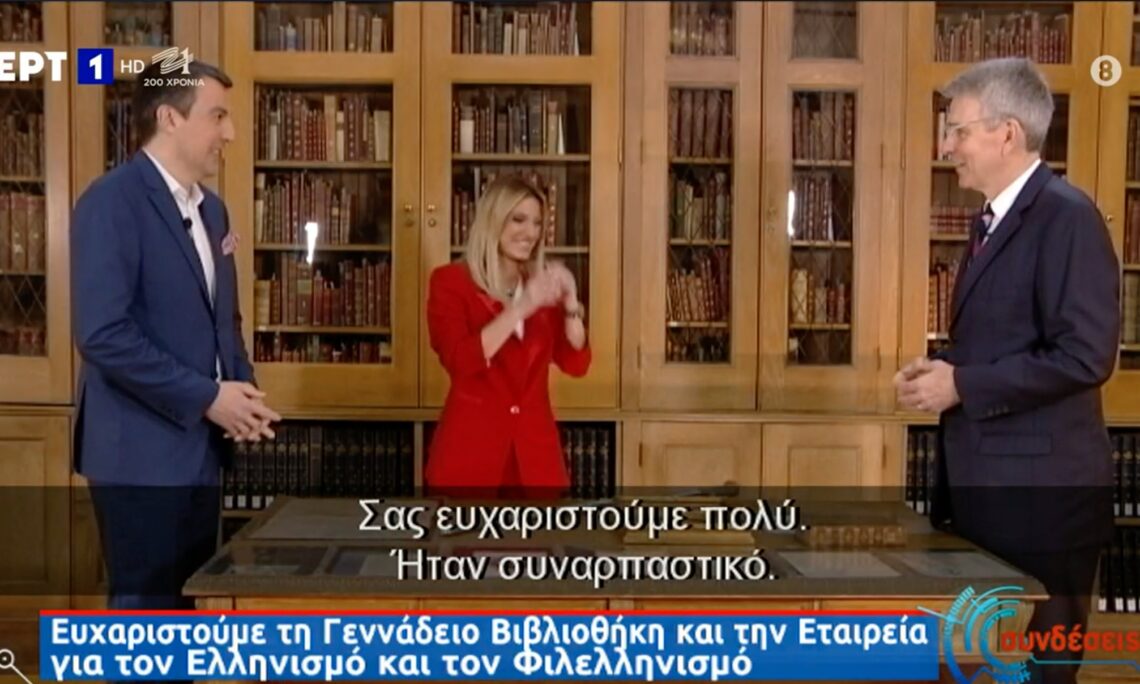 To start, Mr. Ambassador, how can you explain in retrospect the American interest in the Greek cause for freedom and statehood in the early 1820s?

Thank you for letting me share this story, because I think one of the things that really distinguishes the relationship between Greece and the United States is the very strong link between our two revolutions. When our founders rose up in 1776 they were explicitly inspired by Athenian democracy. Our founders read Greek texts. They understood the structures of Athenian democracy which provided the explicit inspiration for our democratic structures. It’s the reason why today, if you look at Washington, DC, our Lincoln Memorial echoes the Parthenon, our Capitol building echoes classical Greek architecture.

And in the same way, 45 years later, when the Greeks rose up against the Ottoman occupation, the Greek revolution became one of the really defining issues of our young country’s foreign policy. There were still great struggles among our states. There was a focus on how to make a federal economy operate, but there was also great passion in the belief that if our democracy was to mean anything Americans had to come to the aid of the Greek Revolutionaries, which is where we get the story of the American Philhellenes.

So I’m excited about this bicentennial as an opportunity to share that story, but I also look forward to the very dynamic future of our relationship.

How does the U.S. Embassy in Athens plan to participate in the 2021 bicentennial commemorative celebrations?

Starting with the history I was talking about, we’re going to have a program here, at the wonderful American School of Classical Studies, for an exhibition focused on the American Philhellenes. We’re supporting a new museum of philhellenes which will help to tell that story. We also have a program with the national opera and the orchestra focused on music from the period of the American Revolution.

But we’re also looking to the future. So we have programs, for instance, with the Athens Science Festival, looking back on 200 years of innovation, reminding people that this is a relationship that has very deep roots and, as I said, is really distinguished by these very strong people-to-people ties but also the values that unite our two countries.

Can you elaborate on the assistance by the American Philhellenes during the Greek War of Independence of 1821 and in the following years?

Thank you for asking, because I’ve really enjoyed learning so many of these stories during my time here in Greece. You have the example of Samuel Gridley Howe, an American abolitionist inspired by the Greek Revolution, engaged in fundraising in the United States. And he brought what was really our first foreign assistance program, medical relief and food, to support the Greek Revolutionaries.

I was very gratified two summers ago when I was able to participate in the inauguration of the new memorial for Samuel Gridley Howe on the island of Aegina. Then last summer, I was in Hydra, and heard the story of William Washington and George Jarvis. I’m very grateful to the mayor for advancing the idea of renaming one of the streets on the island of Hydra after William Washington and George Jarvis. Again, American Philhellenes who dropped everything, came to Greece because they felt so passionate about supporting this revolution.

But what’s also really interesting to me is how this became a topic of debate in the United States. Some of our most distinguished statesmen, [Daniel] Webster, wrote letters about the Greek revolution and why it was so important for America, our young republic, to come to the aid of Greece.

In what ways did the American Revolution of 1776 inspire the then enslaved Greeks?

So there was a very strong link. In many ways, the Greek Revolution was the first liberal revolution in Europe explicitly inspired by the success of the American Revolutionaries and our effort to throw off a colonial yoke.

So it’s a very special relationship, and that same tie has repeated itself over and over again. So, after the Second World War and the Civil War, you saw again in the United States, Greece became a defining issue in American foreign policy through the debates that we had over the Truman Doctrine and the Marshall Plan.

So, again and again you see how Greece occupies this special place in the hearts of Americans, and especially Americans who believe in democracy.

Mr. Ambassador, you mentioned Thomas Jefferson, and I would like to ask you, do you believe you could trace the roots of the strong US-Greek relations of the 19th century back in the 18th century when Thomas Jefferson exchanged views, as the Ambassador of the U.S. and France back then, with Adamantios Korais, the great intellectual and scholar?

In many ways, that’s exactly right. I remember visiting on the island of Chios the Korais library. And you see the papers there, as he was beginning to elaborate the Greek state. And certainly, Jefferson is one of our defining founders, an individual revered in American history. And the fact that he was so focused on the Greek Revolution tells you a lot about the values that unite us and the importance of the success of Greek democracy to the United States.

How will the U.S.-Greek relations of 2021 be remembered in the future?

It’s always hard to make predictions, but I’m very proud about where we are in the U.S.-Greece relationship today. The relationship is stronger than it’s ever been. It enjoys bipartisan support. I have complete confidence that as President-Elect Biden and Secretary of State-Designate Blinken, and the rest of the new administration, take the reins next week, you are going to find that they’re going to pick up exactly where the Trump administration has left off in terms of building out our Strategic Dialogue, building our people-to-people ties, strengthening educational ties, building up the economic and investment ties that are so important to the future of Greece, working together to defeat the pandemic, and move on together.

So I think I’m very, very optimistic about where the relationship is going. I’m excited about the Greek bicentennial as an opportunity to remind Americans about what Greece stands for, and in particular what Athenian democracy stands for. I think this is a wonderful opportunity for Greece to tell some of these stories in the United States. I know that’s Prime Minister Mitsotakis’s intention as well.

So this is going to be a very exciting period in our relationship. It’s going to be a period where we reaffirm our converging strategic interests, but also the values that unite us, which are so important to shaping the future of the Euro-Atlantic community that we’re both invested in.