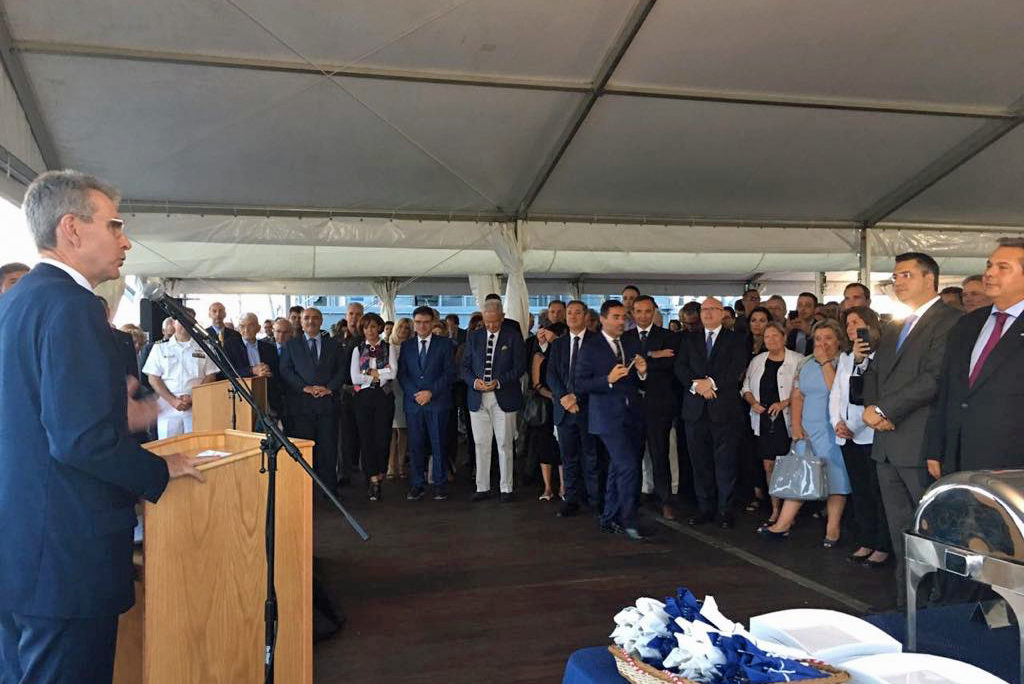 First of all, let me say what an enormous pleasure and an honor it is to be back on board the USS Mount Whitney.  I have a special personal connection to this ship.

First, of course, the Mount Whitney is named after the tallest peak in my home state of California, but it was also the USS Mount Whitney that did me the great honor of hosting my very first reception here in Greece, two years ago in Piraeus, thanks to the support of the Chief of Naval Operations.

So it was more than a pleasure when I learned that 6th Fleet was going to be able to send the USS Mount Whitney here to Thessaloniki as part of our celebration of what I am convinced will be remembered as a truly historic week in the U.S. relationship with Greece and in particular our relationship with the beautiful city of Thessaloniki and the critical region of Macedonia.

I hope that all of the ship’s crew, its officers, sailors, and civilian mariners have been able to enjoy everything that this city offers.  Fantastic heritage.  What many argue is the best food in all of Greece.  And a fantastic welcoming culture.

We’re also very privileged to have with us here this evening two important civilian military leaders from the European theater.  Ambassador Phil Reeker, formerly our Ambassador in Skopje, so somebody who knows Thessaloniki well.  Now serves as the civilian Deputy Commander of the European Command.  He is both a colleague, a friend, but also for Kate and Captain Ketter and the rest of us, a key partner in helping to build the strategic architecture for our alliance with Greece.

And then also Elizabeth Hopkins who serves in a similar role as Foreign Policy Advisor to Admiral Foggo, the U.S. Naval Forces in Europe, Naval Forces in Africa, and the 6th Fleet.

I made the comment at the opening of the MOD Pavilion at the Thessaloniki Fair this weekend that I wanted the American presence in Greece at the TIF this year to celebrate all the dimensions of our relationship.  The critically important economic and commercial dimension as we help to support Greece’s return to economic growth; the thriving people to people and cultural ties reflected in projects like American art everywhere, but also critically important, our defense and security ties which are more significant and more successful today than perhaps ever before.  At a moment when we look to Greece as a key pillar of regional stability, a competent and accomplished NATO ally, and a trusted friend that shares with us both values and strategic interests.

That convergence of strategic interests is reflected here in Thessaloniki in the presence just over my shoulder of the submarine Katsonis, and the frigate Hydra, and I want to thank all of our colleagues from the Hellenic Navy for their support of the Mount Whitney’s mission and also for welcoming me on board today.  It was a terrific visit.  We’ve already thanked Admiral Apostolakis and Admiral Pavlopoulos for that.

Our defense and security relationship today is perhaps more dynamic than ever before.  Just last week we had the visit of the Chairman of the Joint Chiefs of Staff, General Dunford.  We are enjoying broad and important cooperation not just at Souda Bay, which is the lynch pin of our defense cooperation, but also today with MQ9s stationed at Larissa, a more ambitious program of exercises and exchanges than in many, many decades, and an abiding commitment on both sides to continue to work together to support peace and stability in the wider region of the Balkans, the Black Sea, and the Eastern Mediterranean.

So I see the presence of the Mount Whitney today as an opportunity to celebrate that thriving alliance, but also to reaffirm together our commitment to building a Europe whole, free and at peace.  Our commitment to supporting an alliance to which we are both absolutely committed.  And our commitment to a continued high level of strategic dialogue, not only to celebrate what we’ve accomplished in the past, but build for a challenging and important future.

So Captain, thank you very much for your hospitality.  Again, thank you to all of the crew who have welcomed us this evening.  And I want to say a special acknowledgement to all of our partners who are here this evening from the Hellenic Armed Forces, the Coast Guard, and the others who are such strong allies and solid partners for the United States of America.