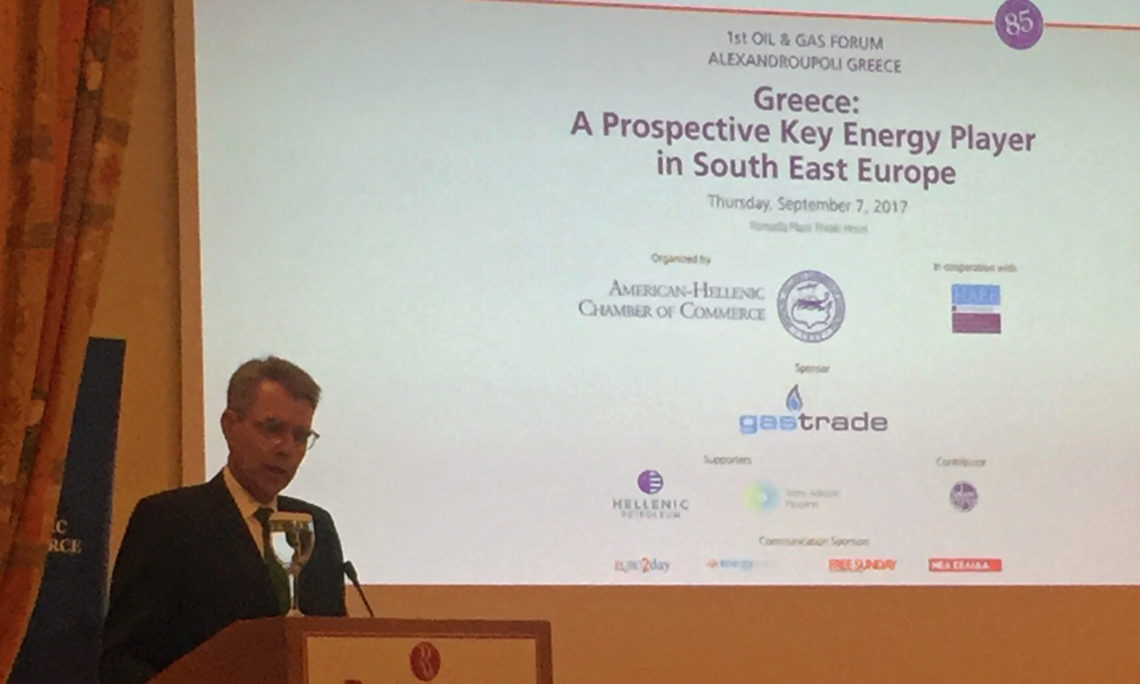 It’s a great pleasure for me to be here in Alexandroupolis.  I want to start by thanking the organizers and sponsors of this conference, most particularly Simos and the American-Hellenic Chamber of Commerce as well as Kostas and the Hellenic Association for Energy Economics for inviting me this morning and for bringing this event to northern Greece and to Alexandroupolis in particular.

This is my first visit to Alexandroupolis, but given the strong U.S. interests in this part of northern Greece, I can assure you it will not be my last, especially as we look forward to next year’s Thessaloniki International Fair where the United States will be the featured country.

For many years the United States has been working with our European partners, and with Greece in particular, to develop the secure supply of energy in this region through the diversification of energy sources.

As Secretary of Energy Rick Perry has said, “The United States is committed to ensuring universal access to affordable and reliable energy to promote economic growth and energy security.”

These efforts have never held more promise, or been more critical to the security and development of Europe, than they are right now.

Just look at where we sit right here today, at the geographic nexus of so many of these efforts.  Only a 30-minute drive north, the Trans-Adriatic Pipeline will connect to the Trans-Anatolian Pipeline, allowing gas from Azerbaijan to flow into the European market.

As I noted in July after visiting the TAP construction site, I think very few people in Athens, other than perhaps my friend Mr. Stathakis, understand the scope and ambition of that project, not to mention its transformative impact on European energy security.  It is a deeply impressive undertaking, with few parallels in recent Greek history, and the progress that it has made in Greece is remarkable.

As that critical piece of the Southern Gas Corridor moves forward, we are also supporting another key link in our joint efforts to move new, non-Russian gas into European markets.  That is the Greece-Bulgaria Interconnector.

The IGB pipeline will provide a route for new sources of gas — whether from Azerbaijan, U.S. LNG, or elsewhere –- to enter a market that for far too long has depended on a single supplier.

A few weeks ago my colleague, Deputy Assistant Secretary of State Hoyt Yee, visited Athens and Sofia to emphasize the strong U.S. support for the IGB.

For this project, time is of the essence.  We are eager to see this key interconnector move forward after several years of discussion and planning, as a natural complement to the progress on TAP.  And in this regard I was very encouraged to hear Prime Minister Tsipras’ strong endorsement of IGB yesterday with Prime Minister Borisov.

Also here in Alexandroupolis, we are pleased that a consortium is working to create a floating storage and regasification unit that would serve as a new entry point for LNG into Greece and the Balkans.  I am sure we will hear more about that today.

In this regard I was so impressed to hear from Mayor Lambakis about the strong community support for all these projects here in the vicinity.

These initiatives in northern Greece, as well as expansion of the Revithoussa LNG terminal in the south, are creating the infrastructure to bring new sources of natural gas into Europe, putting greater power in the hands of consumers and diluting the influence of suppliers that have for too long used energy as a tool of political coercion.

There are few regions where establishing energy options and breaking the leverage of external monopolies is more critical.  This is especially so as over the course of the last two years we have seen an increase in Russian interference in the Balkan region.

As Vice President Pence pointed out speaking to Balkan leaders during his recent visit to Montenegro, “Russia has worked to destabilize the region, undermine your democracies, and divide you from each other and the rest of Europe.  Russia’s intentions were laid bare over the past year when Moscow-backed agents sought to disrupt Montenegro’s elections, attack your parliament and even attempt to assassinate your Prime Minister to dissuade the Montenegrin people from entering our NATO Alliance.”

Many of Russia’s malign tactics are familiar — disinformation, interference in democratic processes, attempts to undermine democratic institutions.  We’ve seen Russia deploy these tactics in Ukraine, throughout Western Europe, and in the United States.  But one of the most powerful arrows in Russia’s malign influence quiver is its dominance in Europe’s gas markets.

I witnessed this dynamic unfold during my time as Ambassador in Ukraine.  There Russia employed its position as the monopoly supplier of gas and its ability to open or close the tap in order to squeeze the government in Kyiv and achieve its political goals.  Ultimately, of course, Russia occupied Crimea and invaded the Donbas region.

Focusing on Ukrainian energy security it took an intensive effort by the European Commission, the United States, and a number of European countries to introduce a west-to-east reverse gas flow and thereby eliminate Russia’s ability to use its gas resources as a political weapon.

Our combined efforts in Ukraine proved that, as we say in the United States, where there’s a will, there’s a way.  And similar efforts are underway in other parts of Europe.

The Baltic states, Croatia, and other Central European countries are developing re-gasification terminals and interconnections that are transforming regional energy markets by making them more independent and secure, providing more reliable and affordable energy solutions to the people of the region.

Here in Greece and across the Balkans, you have a similar opportunity to spur economic growth and strengthen security by implementing these projects I’ve just outlined and others that will link regional energy infrastructure.

And, I’m proud to say, U.S. LNG suppliers are now, for the first time, entering the European market and could be a real factor in helping this region diversify and secure energy sources that can play an important role in advancing energy security.

The arrival of the first U.S. LNG exports in Lithuania last month signified the tectonic shift that is occurring in the natural gas markets.

Make no mistake, we are eager to see our exporters succeed in marketing LNG from the United States.  But the real winner here will be consumer, as the European gas market begins to experience true competition, and energy becomes more accessible and affordable to everyone.

Of course, there is no expectation that U.S. LNG or other sources of gas can entirely supplant Russian gas.  Because of obvious geographic factors, Russia will always supply a significant percentage of European gas demand.  However, it should happen in a truly competitive market.

And more importantly, it should be balanced so that European countries will no longer face the prospect of “turning off the spigot.”

As President Trump made clear when he visited Poland earlier this year, “The United States will never use energy to coerce your nations, and we cannot allow others to do so.”

Greece has the potential to be a crucial partner in helping us to achieve this goal for all of Europe.

In addition to Greece’s future role as a gas hub, Greece also holds significant upstream potential.  And American companies are certainly taking notice of that.

While the Prinos field’s production is currently relatively small, Energean, with American investment, has already expanded its yields.  Other American companies are also looking at the possibilities for upstream Greece and for cooperation with Greek companies in developing hydrocarbon sources.

But Greece has also been a leader in building its renewable energy sources, creating expertise that has allowed Greek companies to succeed around the world, including in the United States, where TERNA, a Greek company, has successfully built wind farms.

And I can say unequivocally this is one area where Greece has a large competitive advantage.  While Greece doesn’t own a monopoly on the sun and wind in Europe, it certainly gets more than its fair share, and your knowledge in harnessing these forces and making them critical energy sources has definitely made American companies eager to work here and to work with Greek companies.

General Electric, for example, has expressed its confidence in the wind market which it sees expanding not only in Greece, but throughout Europe.  In fact, I had the opportunity this last June to celebrate GE’s important role in wind energy as that company relaunched its programs in Greece.

Other energy projects also have the potential to bring in billions of dollars in foreign direct investment and create thousands of jobs, not to mention the benefit they’ll bring by further building Greece’s central position in the regional energy sector.  The U.S. wholly supports Greece’s efforts to develop this sector thereby providing secure, reliable and affordable energy across the region.

And so the United States will continue to partner with Greece and  the European Commission and all of our European Allies and partners to advance European energy security, which will benefit our shared security and prosperity.

In this context, once again I would like to thank the American-Hellenic Chamber and the Hellenic Association for Energy Economics for organizing this event.  I am sure it will be a very productive conference for all and look forward to hearing the results.