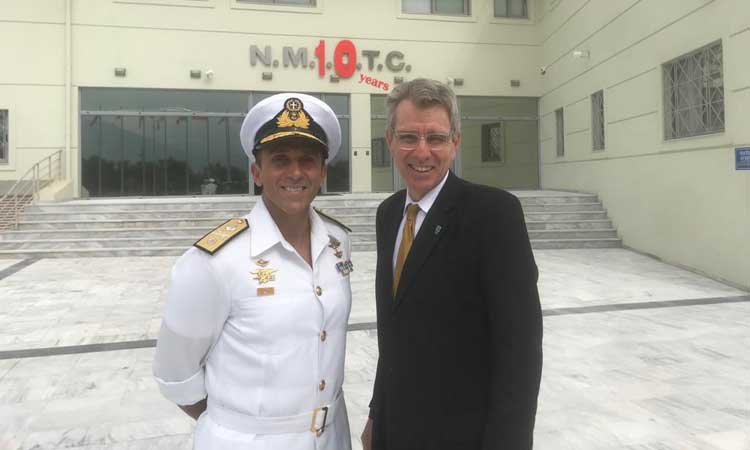 It is a truly great honor for me to be here with you to celebrate the 10th anniversary of the NATO Maritime Interdiction Operations Training Center (NMIOTC), and I want to start by wishing you all, on behalf of the United States, a very sincere Χρόνια Πολλά. I know Capt. Tewell also just celebrated the U.S. Navy’s 243rd anniversary, so let me also say happy birthday as to an amazing group of American sailors who keep us safe and advance U.S. interests in this strategically important region.
During his visit to Athens last May, Admiral Jamie Foggo recognized NMIOTC as a center of excellence where people from all over the world come together to train and to improve maritime security. During his visit, there were Greek, Turkish, American, and other partner nation sailors training here at NMIOTC. The center was also hosting the closing ceremonies for a major multinational exercise, Phoenix Express. This facility is a true gem of our NATO partnership, and we are grateful to the Hellenic Armed Forces for hosting it.

NMIOTC supports Greece, our EU and NATO allies and partner nations, through training on defense, security, law enforcement, and counterterrorism.

Over the years, NMIOTC has also helped to build bridges with many nations that are not members of the NATO alliance, including trainees from the Partnership for Peace, Mediterranean Dialogue, and the Istanbul Cooperation Initiative — from countries like Cyprus, Ukraine and Georgia, which share Greece’s strong maritime traditions and look at Greece as a natural partner. NMIOTC has also provided an international forum to discuss issues related to maritime security threats, such as transnational organized crime at sea, and to develop solutions to global security challenges.

NMIOTC is also helping to address the many challenges that Greece faces uniquely because of its geographic location at the meeting points of continents. In this regard, NMIOTC advances the American strategy of engaging Greece as a pillar of regional stability. As I have often said, Greece sits at the nexus of three strategic problem sets. From the east, there is the ongoing Syrian conflict, the threat of Iran, and asymmetric threats from the eastern Mediterranean. To the south, we see ongoing instability, arrival of refugees and other problems emerging from a yet-to-be united Libya, and to the north, Russia continues to threaten our collective security through its illegal annexation of Crimea, militarization of the Black Sea, and malign influence across the western Balkans.

Greece is a key U.S. ally in dealing with all three of these regions. Through its creation of new partnerships, such as trilateral dialogues with Cyprus and Egypt and with Cyprus and Israel, Greece is taking a leadership role that will pay dividends by stabilizing the area, increasing security, and boosting opportunities for economic growth.

Last week, in his public statements before meeting Greek Minister of Defense Panos Kammenos, our Secretary of Defense James Mattis, whom I was proud to see here at NMIOTC in one of the videos, recognized Greece’s vital role in maintaining regional security. He expressed our appreciation for Greece’s leadership in promoting Balkan stability, citing the Prespes Agreement as an example, and commended Greece’s strong investments in its defense capabilities. And, of course, he singled out NSA Souda Bay as the flagship of our defense and security cooperation.

This most recent meeting of our two Ministers of Defense and the honors attended to Minister Kammenos were an important milestone in deepening our bilateral defense relationship, recommitting to our NATO alliance, and shaping our defense and security agenda, as we build on the success of the Thessaloniki International Fair and look ahead to the first U.S.-Greece Strategic Dialogue in December.

So, I am here today to reaffirm what has been a top priority for me since I started as U.S. Ambassador to the Hellenic Republic.

First of all, we are grateful for the depth and strength of our military partnership with Greece, for Greece’s continued hosting of Naval Support Activity Souda Bay, its strong commitment to NATO and its fulfillment of its obligations on defense spending, and we are sensitive to the complicated neighborhood where Greece must operate. And, with this in mind, our Embassy team is focused on working with our partners in the Greek government to find opportunities to take this relationship forward and to identify new and expanded avenues for cooperation.

Last year, for example, Greece contributed tremendously to the success of Atlantic Resolve by enabling a substantial portion of the U.S. Army’s 10th Combat Aviation Brigade to enter the European theater through the port of Thessaloniki and to depart through Alexandropoulis.

This year, the helicopter movement will be centered at Stefanovikio and will involve more aircraft and solders than ever before. This level of cooperation benefits both our countries by improving NATO transit capability, developing flexible alternatives, and providing another expression of our close security cooperation.

Earlier this year, we resumed Alexander the Great, a large-scale joint exercise between our nations’ Marines, and we’ve also begun a temporary deployment of U.S. UAVs at the Hellenic Air Force base in Larissa. So, this is truly a joint effort, involving all our services and the full spectrum of capabilities, a point that I know General Dunford has emphasized in his recent engagements with Admiral Apostolakis.

And the U.S. has also supported Greece’s efforts to take on additional NATO missions and to exercise a leadership role in regional security. We are grateful for the fact that Greece, in 2018, increased its footprint in Afghanistan within the NATO-led Resolute Support mission. Thank you for your contingent of advisors to the Afghan Air Force at the Kabul Air Wing.

In this context, and here I’ll wind up, the NMIOTC is especially important. It trains our militaries in the skills, interoperability and cooperation at sea that is essential among allied and partner-nations. It reflects Greece’s strong naval capability and deeply rooted maritime traditions in a way that helps us to navigate challenges that our forces confront. Over the past decade, NMIOTC has grown, evolved, and become more important in response to evolving regional maritime security demands. The next decade will surely present new challenges, but I am confident that NMIOTC’s curriculum and training will continue to develop and help prepare the next generation of maritime leaders and sailors. And I am confident that the United States and U.S. forces will remain very strong partners in this regard.

So, congratulations again, on all the good work that you’ve done these past 10 years, and I wish you 100 more.