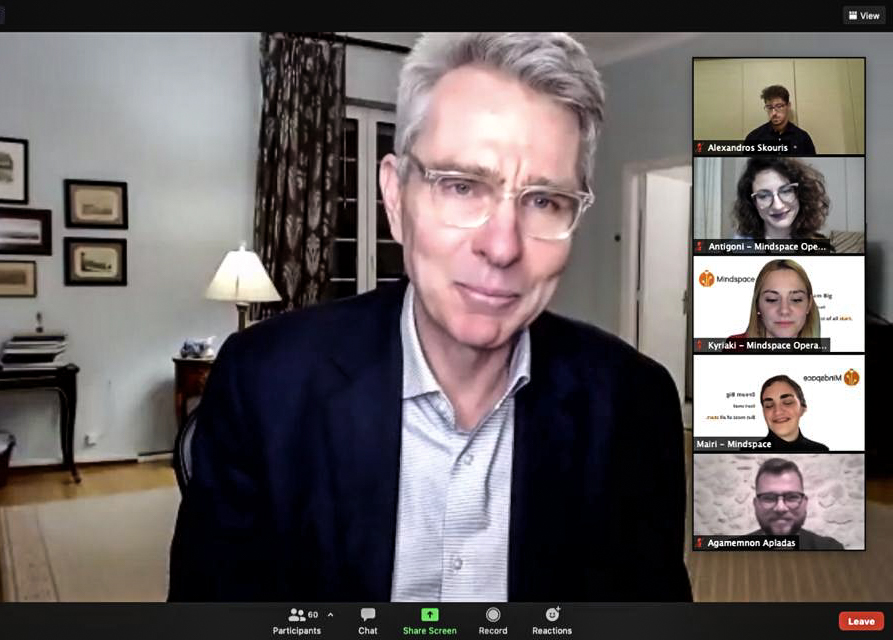 Thanks, Dimitri.  I will have some remarks to offer at the end, but at this point, let me just say thank you especially to all of our judges for supporting this fantastic project, and it was really nice to spend some time with all of you.  I’m very honored to announce that this year’s third place team is Endeavor Analytics.

Fantastic, thanks Dimitri.  I’m really proud to announce that the first place team is E[gg]xcel.  Congratulations you guys!

Thanks Dimitri, and again, thank you to the judges, all the partners that have supported this enterprise, and let me say what a fantastic opportunity it is for me to celebrate with all of you the hard work that the teams have put in to this point, and to do so at a moment when the Greek start-up scene is really attracting global notice.  And having watched this process now for more than four years, it’s really fantastic to see all of this.

I want to start by thanking Dimitri for everything that you do with Mindspace.  Dimitri, as I think many of you guys know, is an alumnus of our International Visitors Leadership Program that the Embassy supported in 2017, focusing on “Social and Economic Entrepreneurship for Young Leaders,” and it’s really encouraging for me having been there at the beginning, Dimitri, to see what you and the program have grown into.  It’s just a fantastic example of what young people in Greece can accomplish.

I’m proud to say that the Embassy has been supporting Mindspace since 2015, and we’re especially excited now to see it beginning to establish chapters all over Greece and the Balkans.  I was really impressed when the team told me that just between 2017 and 2019, Mindspace alumni have started 16 new businesses, employing nearly 100 people, which is what this program is all about: helping to facilitate growth and the next phase of the Greek economy.  And just as we hoped from the very beginning, Mindspace alumni are boosting Greece’s economy and are harnessing the fantastic human capital that I’ve seen from the first days of my arrival here in 2016.

I also want to thank again all of our partners: the MIT Enterprise Forum – Marina, we’ll get you back here live in person at some point – MIT, the Athens University of Economics and Business for their investments in Greece’s next-generation workforce, and all of your commitment to helping to spread the entrepreneurial mindset that I truly believe is going to transform the Greek economy in the years ahead, creating new businesses and new opportunities.

I also want to say a quick word, Dimitri, congratulating Mindspace for your move into Northern Macedonia and the way in which you’ve been offering students there access to your accelerator program run with the Athens University of Economics and Business.  I think these kinds of regional programs serve two objectives.  First of all, they help to give critical mass to this wider region of 30 million people in Greece and the Western Balkans, but they also help to build bridges of stability and prosperity, strengthening the cooperation between Athens and Washington D.C. in the energy and technology areas.

And so the focus of this year’s Mindspace competition could not fit better with what we’ve been doing at the Embassy, both in terms of energy and in terms of digital technology, the sectors where our cooperation is really flourishing.

As you all know, there’s a long list of American companies that have started to make significant investments in Greece’s digital economy.  Microsoft, Digital Realty, Pfizer, Cisco, Deloitte, Amazon Web Services, Applied Materials.  These are all companies that have recognized the opportunities that Greece represents and are really helping to put Greece on the international map and especially the European map as a regional hub for innovation and technology.  And I’m convinced that we’re just at the beginning of that process.

Energy cooperation, the other side of this year’s program, is one of the real bright spots of U.S.-Greece relations.  And especially now with President Biden’s decision to bring the United States back into the Paris Agreement.  I’m confident that we’re going to accelerate our partnership on a green agenda to help the Prime Minister and the Greek government meet Greece’s ambitious goal of reducing carbon emissions, closing lignite power plants by 2028.  We already do a lot together, but I think you’re going to see even more, especially in the renewables sectors, areas like wind, solar, storage, and smart grids, which you guys have been talking about, where American companies lead the world.

These are just some of the opportunities now to build on the progress that I’ve seen over the past four-and-a-half years in U.S.-Greece relations with the new Biden administration.  We’re very excited about the Greek bicentennial this year in 2021, and we look forward to working with the Greece 2021 Committee both to commemorate this 200-year anniversary, but also look at how we can work together to shape Greece’s future.

We believe in you, and we’re committed to helping you to open pathways to your success.  And that’s why, as part of our bicentennial celebrations, we’re going to fund a virtual entrepreneurship mentoring program called “Connect the Dots” in partnership with The Hellenic Initiative in the United States.  This is a project that will give Greek entrepreneurs like you the opportunity to be mentored by successful Greek American business leaders, so more to come on that.