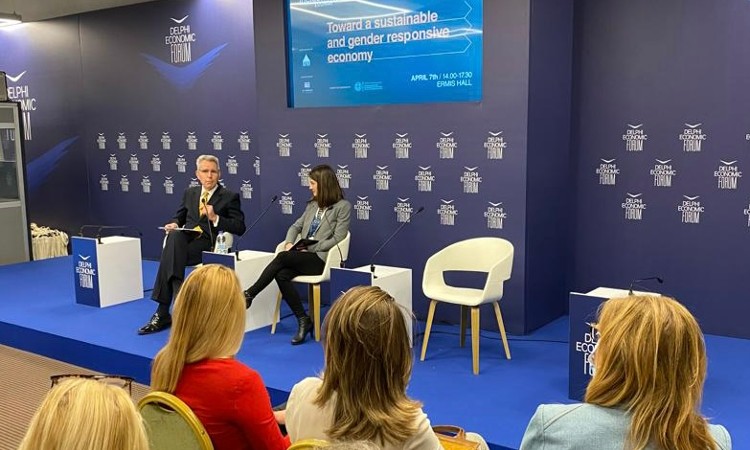 Thank you, Stella.  It’s so great to be back here in Delphi.

Since this is my first public remark here, I want to start by saying how wonderful it is to be back in a room full of human beings again.  [Laughter].

The first talk I went to was a discussion with Lydia Karras and her friends from Ellinki Etairia.  It was partially a memorial to my dear friend Kosta, but it was also one of the best discussions I’ve attended in five Delphis, focused on the unique atmosphere of this particular corner of the Earth.  So it really is special to be here.  And I’m especially glad that we’re able to do this event, our Inclusivity Lounge, here at Delphi.

I want to start by giving huge credit to my team at the embassy — Cindy Harvey, our Public Affairs Officer, and the indispensable Eleni Alexaki — who conceived of the Inclusivity Lounge for Delphi 2020 when we thought we were all going to be sitting here two years ago.  And we’ve done it online since then, and I want to say thank you Stella, to you and to Penelope for the great partnership.

These are a set of issues that I feel really passionately about.  I’m very grateful that we have such a strong relationship with the Greek government on these issues, with Minister Maria Syrengela who’s going to be speaking later on[…].

This topic could not be more important right now.  I want to start by talking for just a second about Ukraine which is an issue that has affected me, has affected all of us, over the past six months, but it’s affected me in a very specific and personal way.

There are so many voices that we have seen since Putin’s unprovoked and brutal invasion on the 24th of February, but a lot of those voices have been women and mothers.  In part because they’re the only ones who could get out, so they are the four million refugees, the largest refugee crisis the world has seen since the 2nd World War.

When I was Ambassador in Ukraine I got to know so many strong women in civil society, and I’m very proud that today a number of those women are now members of parliament.  So people like Ivanna Klympush who was in Washington last week meeting with Deputy Secretary Sherman and others to highlight the importance of the whole world rallying to support Ukraine, to ensure that democratic forces prevail in what I am convinced will be one of the defining struggles of the 21st century.

None of this, and I’ll talk more about it later today, none of what’s happened in Ukraine in terms of their courage and response has surprised me, and I’m not at all surprised to see women being at the front of the line in terms of defending Ukrainian democracy.

But it’s important for all of us to understand that in the situation in which the world is going through a series of crises, all of which have affected women disproportionately.  The war in Ukraine I’ve talked about.  The focus of the Inclusivity Lounge this year — the climate crisis — disproportionately affecting women and mothers around the world.  The COVID crisis which we talked about last year when we did Delphi in Athens.

If we’re going to be successful in addressing these challenges, we also have to address the improvement of the situation of women, the empowerment of women.  This has been a priority for me almost since the day of my arrival in Greece six years ago.  I’ve been really, really proud of all the different programs that the embassy has been involved with, focused on reinforcing all that is already happening in Greek society, in terms of strengthening the position of women and girls, women’s entrepreneurial empowerment, women’s political empowerment.

It’s been such a privilege for me to get to work with May Zanni and all of the incredibly impressive and powerful women at Women Act and the work that they’ve done with us through the Women CANdidates Program.  I was incredibly honored to be part of the launch of Women Act Thessaloniki, but also now to see how Woman Act is growing in Alexandroupoli.  May has told me how that’s one of the most engaged communities that they have right now.

Code Girls, a program that we have been doing throughout my tenure here.  I’ll always remember my first Code Girls which was in Trikala, and how impressive it was to see these young girls, 12 years old, and how enthusiastic they were about technology tools, and thinking those 12 years olds are now 18 year old young women, and what that means for how the Greek economy works.

I was so thrilled in the fall, we had Code Girls Syros, the first time we had done Code Girls on an island.  And to meet one of the instructors who had just graduated from the Polytechnical, was herself a computer scientist, and was a Code Girls graduate.  So it really captures this idea of paying it back.

I am in awe, as I have been since the first day I met her in one of my first engagements in Greece, of Nadina Christopoulou, in awe of everybody at the Melissa Network, and all the work that they do for women refugees, the courage that they have demonstrated.  And I’m especially awed of the partnership that we’ve had with Melissa Network on the work that they have done to support the Afghan women parliamentarians who came here to Greece after the collapse of the government in Kabul last August.

And it’s worth remembering, there was a time when the majority of the women from the Afghan parliament were right here in Greece.  And what was so impressive to me was they weren’t thinking as a diaspora population.  They were thinking about how during the period of time they were outside of Afghanistan they could build networks, be loyal to their constituents back in Afghanistan, and prepare for when they could go home.

It’s a little bit like the Ukrainian women who I hear from now, some of whom I’m in touch with.  They all say the same thing.  They all say we’re not refugees.  We’re temporarily displaced.  We’re here until we beat Putin and then we go back to rebuild our democracy.  For me that’s incredibly powerful.

So it’s a real honor to be with this group.  I shouldn’t talk about Ukraine because it gets me all choked up.  I also think in terms of the work that we do together, I will be finishing up my time in Greece in a couple of weeks.  The work is not done.  And figuring out how we continue to build networks that bring women into this effort is really, really important.  It’s still the case there are too many conferences, too many rooms I go into in Greece where the only woman in the room is somebody from my team.  That should not happen, and it doesn’t need to happen.

I was really delighted yesterday, we had another meeting with a group that I’ve been trying to support from my first days in Greece.  It’s a Women in Energy group, which happens to include the CEO of Greece’s biggest gas company, the Secretary General of the Ministry of Energy.  So these are not inconsequential positions and these are people who are in their position because of their talent, their creativity and their hard work, and they just happen to be women.  But creating an environment where that is not an accident is essential to Greece’s long-term competitiveness, just as it’s essential in the United States.  And we still have work to do as well.

I say this as the father of a 28 year old daughter who is in the work force.  I’m very proud of her success, but I see how she still has to struggle sometimes to be heard.  And I also saw, for her — I remember her reaction when Hillary Clinton lost the election.  How disempowering that was.  But also when we elected Kamala Harris as our first African American woman Vice President, the biggest, the most senior position in our government ever achieved by a woman in politics.

So this is all really important stuff.  It’s been a huge honor to work with you guys.  I’m very grateful for our team.  And I wish you the very best.