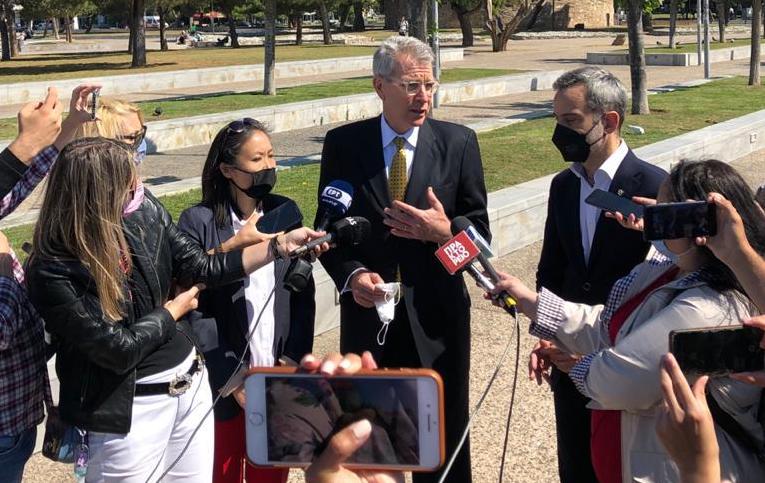 Kalimera. Let me start by thanking Mayor Zervas for arranging this morning to let me enjoy another aspect of this beautiful city. I talked a lot last night at the AmCham Conference about the emphasis that my government is placing on our partnership with Northern Greece, especially with Thessaloniki in the areas of technology, the support we are providing to American investors that are coming to the city, because of its human capital.

But it’s no secret that another reason that Thessaloniki is drawing attention is all around us. It’s one of the more beautiful cities in southeastern Europe. It has this fantastic waterfront.

I am very grateful to the Mayor.  As he said I am an avid cyclist, and today is World Bicycle Day. I  can’t think of a better way to start World Bicycle Day than riding along this waterfront.

I want to congratulate the Mayor on the steps he has taken to expand the bicycle network around the city, very much like what has happened in big European capitals during the lockdown. Paris is an important example.

Just like in the United States, we all struggle with how to find the balance for transportation. I think American companies, American technology can be part of that. I know that Cisco for instance has focused on urban mobility planning. I know there is a partnership between Texas A&M University and Thess INTEC focused on the same issues as well.

But as a cyclist I will say, anything that makes it easier for people to get out of their cars and to use clean transportation is a plus.

I also want to underline how pleased I am to see Thessaloniki opening up again. The United States and I’ve worked closely with Minister Theocharis on the relaunch of direct flights from the United States and it’s really fantastic to see the restaurants opening again, people out enjoying everything that this region of Macedonia has to offer.

It’s great to be back in Thessaloniki. I’ve seen our wonderful Consul General Liz Lee. I’ve seen her a lot on the zoom screen over the past eight months, but it’s nice to actually spend some time together. And I know she is looking forward as well to getting to know even more of this city and this important region. Efharisto polu!