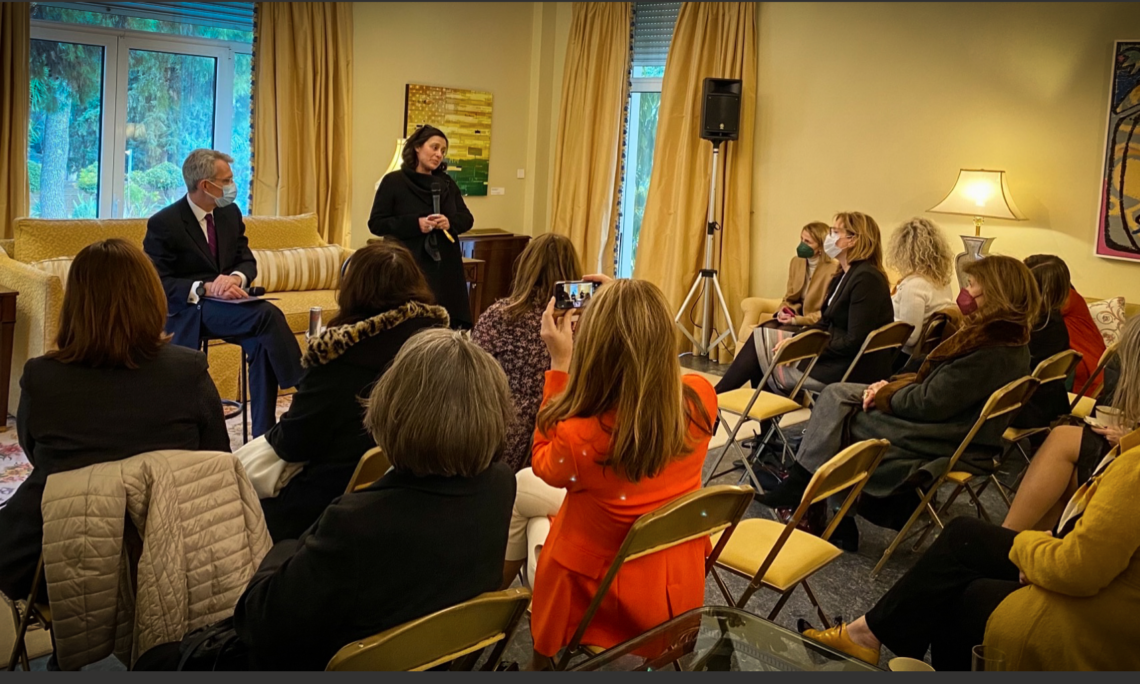 Kalispera, good afternoon everybody.  Kalo mina, thank you everybody for coming out this afternoon.  I’ve really been looking forward to this event which Cindy and I started putting together a couple of weeks ago, as we talked about how we here at the Embassy we’re going to mark Women’s History Month.

And I’m especially grateful that our friend Deputy Minister Maria Syreggela is here.  She’s going to talk just a little bit in a minute after I’m finished about some of the Greek government’s programs on women’s empowerment and how the government is working to address all of these issues.

I had a debate with myself about whether it was going to be appropriate to go ahead with this event, which is meant to be something of a celebration, given the really dreadful things that are happening in Ukraine right now.  But I decided, at the end of the day, that it was important to continue, even with all of the terrible images that we’re seeing.

I say that also as a former U.S. Ambassador to Ukraine.  And it’s been incredibly painful for me to go through the past week and see streets and bridges and roads that I know from my bike rides in which were part of the background for Mary’s and my life for three years, suddenly being turned into a battlefield.

It’s also important, especially this month, to recognize the impact that Russia’s invasion of Ukraine has had on Ukrainian women.  We’ve all seen the pictures of the subways and the bomb shelters with the small children and the mothers, the scenes of panic at the train stations, the kind of thing Europe hasn’t seen for many, many decades.

Right now, today, we’ve had two terrible events today, the missile attack in the center of Kharkiv, Ukraine’s second largest city.  Imagine a missile landing in Syntagma, and you will have an idea of what this represents, a war crime by any measure.  And then, of course, especially for the Hellenic world, the ongoing encirclement and attacks on the city of Mariupol which I have visited, which has suffered terrible violence over the past few days.  But, I also remember the incredibly important role that women have played in the transformation that Ukraine has gone through over the past eight years.

I worked very closely for instance with Eka Zguladze, who was the Deputy Minister of Interior, who basically reinvented the Ukrainian police force.  Many of the police and defenders that you’re seeing right now are her work.  Another dear friend, Natalie Jaresko, who was the Finance Minister of Ukraine when I was there.  She basically saved the country’s economy.  Her deputy, Oksana Markarova, is now Ukraine’s Ambassador in Washington, D.C., so somebody we’re all seeing on CNN.

And it’s just a good reminder of the vital role that women play in the success of our societies.  Something we certainly see here in Greece.  I always say that Minister Niki Kerameus is the most revolutionary figure in this government because of the work that she’s been doing to build a more extroverted and globally competitive educational system.  And then, of course, what so many of you represent, which is the vitality of Greece’s civil society, and all the fantastic work that our civil society partners are doing to bend all of our societies in a more just direction, and to ensure the full participation of women in Greece’s democracy.

So that’s a little bit of a background on how we got to today.  The other reason we wanted to do this event was to honor one individual and one institution in particular, and that’s our dear friend Nadina.

Every year, U.S. ambassadors around the world are invited to nominate one individual for an award, which I think was started by Secretary of State Clinton, which is the International Women of Courage Award.  And when we started to put together our ideas for Greece for this year, it was about a 30 second conversation to decide that the person who really should be recognized for Greece is Nadina Christopoulou, because of the extraordinary work that Nadina and her team at Melissa have done this past year to look after the welfare and safety of hundreds of Afghan women who came to Greece after the extraordinary violence that Kabul descended into last August.

So, Nadina, I know we’re going to ask you to say a few words in a minute or two.  But I just want you to know, on behalf of the whole State Department and the Embassy team, how much we respect what you and your team have accomplished.  I have some personal insight on this.  I think my visit to Melissa was probably one of the first things I did after arriving in Athens five and a half years ago, and Eleni gets the credit or the blame for that.

And then I’ll always remember that Nadina was one of the people, including many of you in the room today, who we invited to President Obama’s speech at the Niarchos Center in November when he came to Greece.  And when we were working on President Obama’s speech, he wanted to say something about the enormous generosity that Greece had shown to refugees and migrants who came to this country in 2015 and 2016 at the peak of the emergency.  President Obama doesn’t name Nadina by name, but he quotes her, and she knew who he was talking about, and I certainly did as well.

So it’s a relationship that goes back a long way.  My wife Mary has done some work at Melissa as well, and understands how important the leadership that Nadina provides is.  So Nadina, thank you, for all that you do to make our society richer, but also for the fantastic partnership that you’ve had with so many of us from here at the U.S. Embassy.