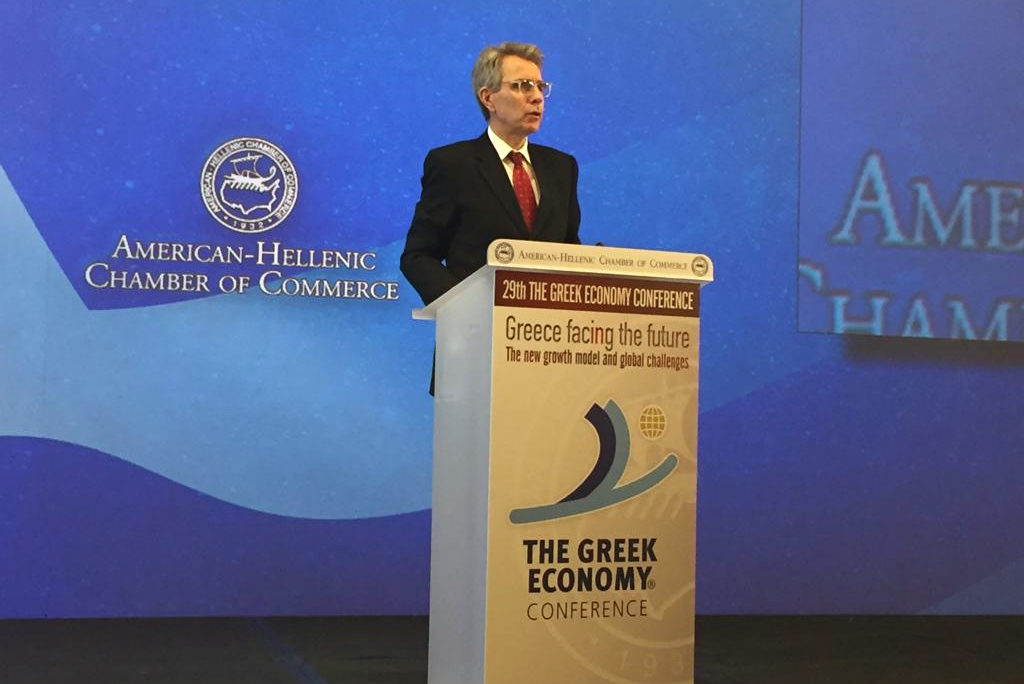 Good afternoon. Since we are meeting during the official mourning period for the passing of former president Bush, I wanted to respond again with a lot of appreciation to the many Greeks who have expressed their condolences on the passing of a truly great American Statesman and thank you also to the Chamber.

Elias, Simos, Thanassis, thank you very much for having me here today. I am grateful to both the American-Hellenic Chamber of Commerce and the Federation of Industries of Northern Greece for your support not only for this event, but for your continued close cooperation with the U.S. mission and support for the U.S.-Greece alliance.

This is certainly the most consequential and most timely of the three Greek economy conferences sponsored by Amcham that I’ve had the honor to address.

Since I spoke with you at this event last year we have had a number of significant achievements. At that time, we were building momentum for our role as honored country at the Thessaloniki International Fair. Some people actually weren’t sure if we could pull it off.

Since then, Greece has successfully exited its series of international bailout programs. This marked an important step in Greece’s return to economic normalcy and renewed prosperity, one that will continue to generate positive results as the country carries forward the ongoing and important work of implementing reforms and improving its international competitiveness.

Then, together with our AmCham partners, we made our participation at TIF a landmark success. Our broad, high-level U.S. representation at TIF, led by Commerce Secretary Wilbur Ross with senior officials from the Congress, the White House, the Department of Energy, and the State Department, underscored the Trump Administration’s commitment to support Greece through this recovery period and well beyond. Many of those same high-level officials will represent the U.S. again this month at the Strategic Dialogue in Washington.

As a result of our combined efforts with Simos, Elias and the rest of the team at AmCham, more than 50 U.S. companies representing a wide array of innovative sectors participated in TIF. The record-breaking turnout at our pavilion, which included over 75 related events over ten days, demonstrated the strength of our engagement and the potential for increasing U.S.-Greece ties going forward. Equally important, TIF 2018 helped to reinforce our investment in Greece as a pillar of regional stability. Special thanks in this regard to Simos both for his partnership but also for his leadership in achieving this historic success for Amcham and for the American business community.

For U.S. companies and officials based in Washington, the TIF experience demonstrated, in ways that words cannot, the enormous potential of Greece, and northern Greece in particular. It brought home the concept that Greece is not simply a single market of 11 million, but can serve as a gateway for the wider Balkans region. This was the key takeaway from the recent Thessaloniki Summit put on by Thanassis and the Federation of Industries of Northern Greece, where prime ministers from Greece, Bulgaria, Romania and Serbia were in agreement about the need for greater regional integration and economic cooperation.
The commitment of the Greek government to take positive steps to unlock this potential creates significant new opportunities for international firms seeking to expand activities across a dynamic and growing market, and we stand by to help in this effort. We commend Greece as it assumes an increasing leadership role in resolving long-standing diplomatic issues in this area, and affirm our common vision to integrate the countries of the region firmly in European and Euro-Atlantic institutions.

We see TIF as the launching pad for intensified efforts to deepen our partnership with Greece. Just a couple of weeks after the TIF, Secretary Ross met again with Prime Minister Tsipras in New York City where he hosted senior U.S. private sector officials to talk about opportunities in Greece.

From my own experience at the fair, I was especially struck by the energy and enthusiasm of youth, local innovators, and entrepreneurs, not only during our own Innovation Hub events, but particularly in the Greek government’s ‘Digital Greece’ pavilion and among the young students in the Academic pavilion.

Last month Minister of Digital Policy Pappas further built on these important elements of the TIF by hosting discussions with the start-ups from Pavilion 12 and with top American tech companies from the U.S. Pavilion. The discussions focused on how to create opportunities here and how to leverage Greece’s human capital- to keep TIF alive. Together with the American Hellenic Chamber of Commerce, we are developing a follow-on program in the spring that will bring together U.S. investment funds and Greek start-ups as a way to continue to facilitate ties and promote investment.

Looking forward, we are also building on this positive momentum with the launch of the U.S.-Greece Strategic Dialogue on December 13. This Dialogue will be led by Secretary of State Pompeo and Alternate Minister of Foreign Affairs Katrougalos and will include the participation of senior officials from agencies and ministries across both our governments, several of whom, as I mentioned, were at TIF. And in this regard, I am greatly impressed by the seriousness that the Greek government is bringing to preparations for the Strategic Dialogue and the focus, as Minister Katrougalos put to me, on keeping alive the small miracle of TIF.

The Strategic Dialogue reflects the U.S. decision to make a significant investment in our relationship with Greece and reflects our view of Greece as a pillar of regional stability. We’ll work to lock in and expand the important gains in our relationship across six main pillars – including on our bilateral energy cooperation and our trade and investment relationship. And I will have more to say on the broader agenda for the Strategic Dialogue in a session later today with Simos and Ministry of Foreign Affairs Secretary General Brachos.

In addition to innovation, I see four other sectors that offer great opportunities for U.S. investors in Greece.

The first is one that many of you have heard me speak about in the past – the energy sector. The expansion and renovation of the Revithoussa LNG terminal, encouraging signs from the initial market test for the FSRU in Alexandroupolis, the continued progress on the TAP pipeline, and the positive signals from Bulgaria on the Greece-Bulgaria Interconnector, all demonstrate Greece’s growing role as an European energy hub for the region.

We see many additional possibilities for U.S. investment in the energy sector, starting with ExxonMobil’s exploration project off of Crete together with Total and Hellenic Petroleum. We believe that U.S. LNG can be commercially competitive, and also expect that U.S. companies with American know- how and technology will play a key role in helping Greece meet its renewables commitments.

Transport and logistics is another area where U.S. investment is already making a difference. In one example, since last April, the Greek-American company Onex has serviced and repaired 38 ships at the shipyard in Syros, creating more than 300 jobs in the process and helping revive this important economic asset that was, literally, rusting away when I first visited Syros. We are working hard to encourage more U.S. investors to follow this example, and I would note that Onex used the opportunity of TIF to express formal interest in also buying the shipyards at Elefsina and Skaramangas and I hope that we will see these transactions moving ahead as well.

The largest driver of growth in Greece in recent years is the tourism sector. U.S. investors ranging from Marriott and Hyatt to Airbnb are benefitting from and helping to accelerate the rapid expansion in visitors to Greece. Continued growth will come from expanding the tourist season and diversifying where tourists visit. And in this regard, especially since we have a delegation here from Chicago today, I should draw attention to the growth of a number of direct air services from the United States to Greece including American Airlines service from Chicago, starting next year.

Last, there’s agriculture and food. AmCham’s event at the American Farm School in Thessaloniki next week helps keep the focus on this important sector. This is an area where close cooperation between our regulatory authorities is important for helping investors follow through on opportunities.

I believe that the momentum from the TIF will be realized across all of these sectors. While I will continue to be a strong advocate for strong bilateral trade and commercial ties, success in attracting American investors to Greece ultimately depends on the policies and decisions that the government is going to take in the weeks and months ahead. No doubt there have been significant improvements in returning to positive growth rates and reducing unemployment, but much more remains to be done for Greece to live up to its potential and grow its way back from a challenging economic period.

I occasionally hear people say that it would be better to wait until after elections to push ahead with reforms to continue to improve the business environment. I disagree. I believe that waiting would be a huge mistake, and could stall the positive momentum from the end of the bailout, TIF and all of the efforts by the government and private sector in recent years.

Given the unanimity between the leading political parties on the importance of foreign direct investment to Greece’s recovery, I encourage leaders to continue to move forward. The key signals that I will be looking at include resolving the outstanding issues surrounding the Hellenikon project and moving forward with the casino license and further development of the property, a transparent and competitive processes on key infrastructure projects including the Alexandroupolis port and Elefsina shipyard, completing the ongoing privatization of key energy assets, like the Hellenic Petroleum and beginning construction of the IGB.

Policies to promote innovation, including the protection of intellectual property rights, are important if Greece is going to compete in knowledge-based and creative industries. The government’s audio-visual incentive program and new copyright committee aimed at reducing internet piracy are positive first steps – and I was delighted to see the government’s effort hit U.S. screens with AMC’s debut of Little Drummer Girl – demonstrating the vitality of the government’s incentive program, but much more can be done.

So we plan to use the U.S.-Greece Strategic Dialogue to continue to highlight opportunities but also to push for reforms and progress. We look forward to continued close cooperation with the American-Hellenic Chamber of Commerce and the Federation of Industries of Northern Greece on all of these issues, ensuring that policy makers in both Greece and the U.S. remain connected to the on-the-ground realities of the business world in order to drive economic growth and advance the American interest in Greece’s return to prosperity so you can play your historic role as Europe’s eastern bastion. Thank you.