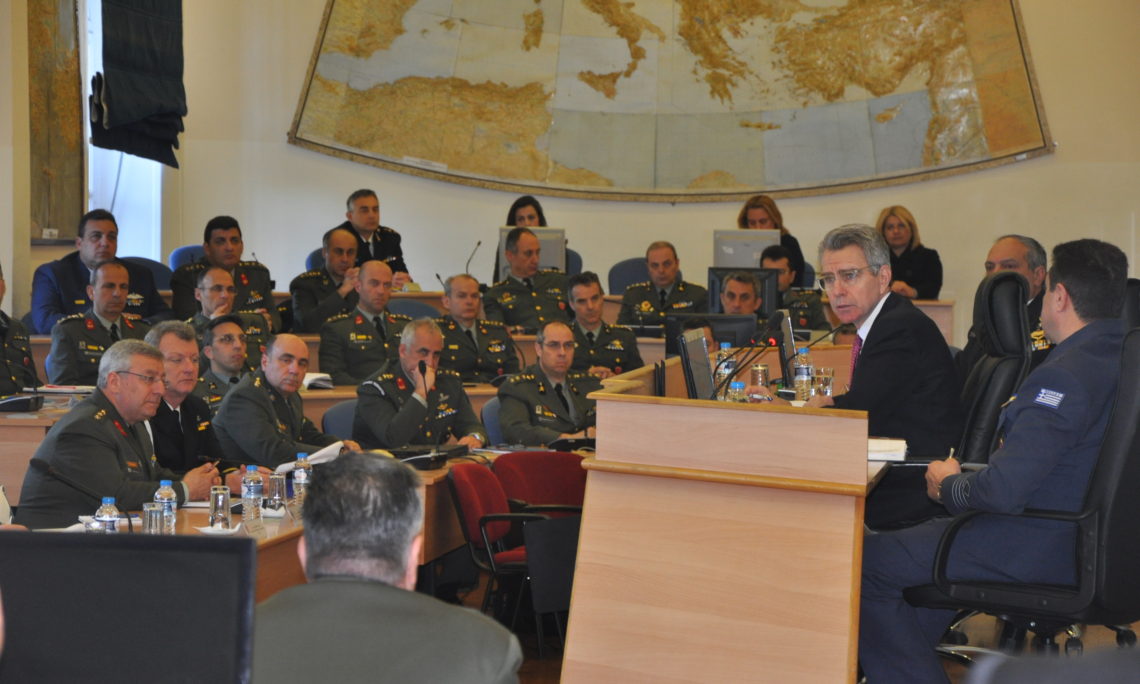 Thank you very much, Vice Admiral Diakopoulos, for the warm welcome, but also for the opportunity to address this very distinguished forum. The War College is a unique school that provides an opportunity for you as military leaders, as regional military leaders, to discuss the challenges that the region faces. And from that perspective, this forum is a great example of Greek leadership on regional politics and security issues — the idea that I talk about all the time of the U.S. view of Greece as a pillar of stability in a very complicated region.

I want to compliment all of the officers who are here today for your commitment to working with us as allies to identify ways to best advance our shared strategic interests.

What I’d like to do today is to share some of my thoughts with you on how I see the regional security situation, the importance of NATO and regional partnerships, and the ways in which regional institutions are helping to advance security and stability.

I am going to try to keep my opening remarks very short so we can have an open dialogue on any issues of concern.

First, regarding the U.S. relationship with NATO and the EU, I want to emphasize that the United States remains committed to these relationships. Our security guarantees to our allies are ironclad and non-negotiable. It is in America’s interests for our allies to be strong, sovereign, prosperous, and committed to the advancement of our shared values and ideals.

Terrorism, ongoing conflicts in the Middle East and North Africa, and unprecedented migration flows to Europe are among the most pressing challenges we face, and the cooperation fostered here through the War College is an important demonstration of our commitment to facing these challenges together. Just as we can’t ignore these challenges to our security, we cannot face them alone.

Greece is playing a leadership role today as one of only a few countries that is both meeting and exceeding its national obligations to NATO, and doing so despite the severe economic challenges that this country has faced over the past several years. We are grateful for Greece’s commitment to what we believe is the world’s most successful alliance in history. I think both our countries agree that our alliances must be made stronger in the context of the current strategic environment; and that a lack of diligence in modernizing our alliance approach will only invite greater risk.

I often point out that Greece occupies a particularly challenging strategic geography, and I appreciate the big map on the wall up here which reminds us of it.

But Greece has also taken initiatives to create new alliances and to convene an ever broadening group of regional partners with a mutual interest in security, stability and prosperity. In this regard the United States strongly supports, for instance, the Greek bilateral efforts with Israel and Cyprus, the Greece-Egypt-Cyprus trilateral, and other emerging strategic geographies. I was reminded of Greece’s uniquely networked relationships last month when I was able to visit Andravida Air Base for the DV day of INIOHOS exercise, where the Hellenic Air Force had convoked an impressive array of partners that don’t usually fly and train together. And I know speaking to my U.S. Air Force colleagues, that our pilots who were at Andravida were deeply impressed, equally by their Hellenic Air Force counterparts but also by the quality training opportunities that the exercise provided. So my real congratulations to General Christodoulou and the rest of the Hellenic Air Force for that initiative.

Similarly, there’s a diverse group here today from Skopje, from Cairo, joining the Hellenic Armed Forces is an example of Greece’s networking capabilities.

We see Greece’s position as critical and unique in the world, and particularly along Europe’s Southern Flank. Greece exists at the nexus of three separate strategic problem sets which come together over Greece. On the one hand there is the ongoing Syrian conflict, the threat of Iran and asymmetric threats from the eastern Mediterranean. To the south the instability and emergence of refugees, and other problems emerging from a yet-to-be united Libya, and to the north, the malign influence of Russia exercised through its illegal annexation of Crimea and increased militarization of the Black Sea.

Greece is a critical ally in dealing with all three of these problems.

I want to flag for you and encourage everybody to read, if you have not already, the National Defense Strategy for the United States. There is a short 10 page version of this document which states clearly that interstate strategic competition, not terrorism, is now the primary concern of U.S. national security. In this regard, I’d like to say just a little bit more about Russia. Through the four years since the invasion of Crimea, the international community has appropriately been united in condemning Russia’s aggressive efforts to ferment instability and discord and its disrespect for other nations’ sovereignties. Our collective reaction to the nerve agent attacks on former Russian spies in the United Kingdom was immediate and collective, sending a strong message that our countries will not accept Russian behavior that so flagrantly defies international norms and standards.

In this context, I would point to the importance and success of Atlantic Resolve, a series of Allied military actions designed to reassure NATO allies and partners of America’s dedication to enduring peace and stability in the region in light of the changed Russian behaviors.

This year, Greece contributed tremendously to the success of Atlantic Resolve by enabling a substantial portion of the 10th Combat Aviation Brigade to enter the European theater through the port of Thessaloniki and to depart through the port of Alexandropoulis. As a result, the Alliance’s logistical capability, interoperability, and ability to mobilize resources efficiently was demonstrated. We also saw a better and more innovative way to use existing resources here in Greece to achieve our joint and multilateral objectives, something that we plan to continue doing in the future.

In the same category, I would flag the Balkans as a particularly fragile region where we appreciate Greece’s leadership in promoting the integration of the Western Balkans into Euro-Atlantic institutions. We similarly appreciate Greece’s support of the Trans-Adriatic Pipeline and the IGB interconnector in contributing to energy security through the diversification of energy sources. We will continue to work with partners in the EU to bring stability, prosperity, and democracy to the region. Greece is an essential ally and a pillar of stability in this volatile region, and we will look to it as southern Europe’s energy hub.

To conclude, and then open up to discussions, what the U.S. is able to achieve in this part of the world together with allies is thanks in great part to the strong bilateral defense relationship we enjoy with Greece and the regional partnerships that Greece and the United States share in common. The security threats in the region around Greece have become much more complex in recent years, and we will need all of our efforts together to overcome these.