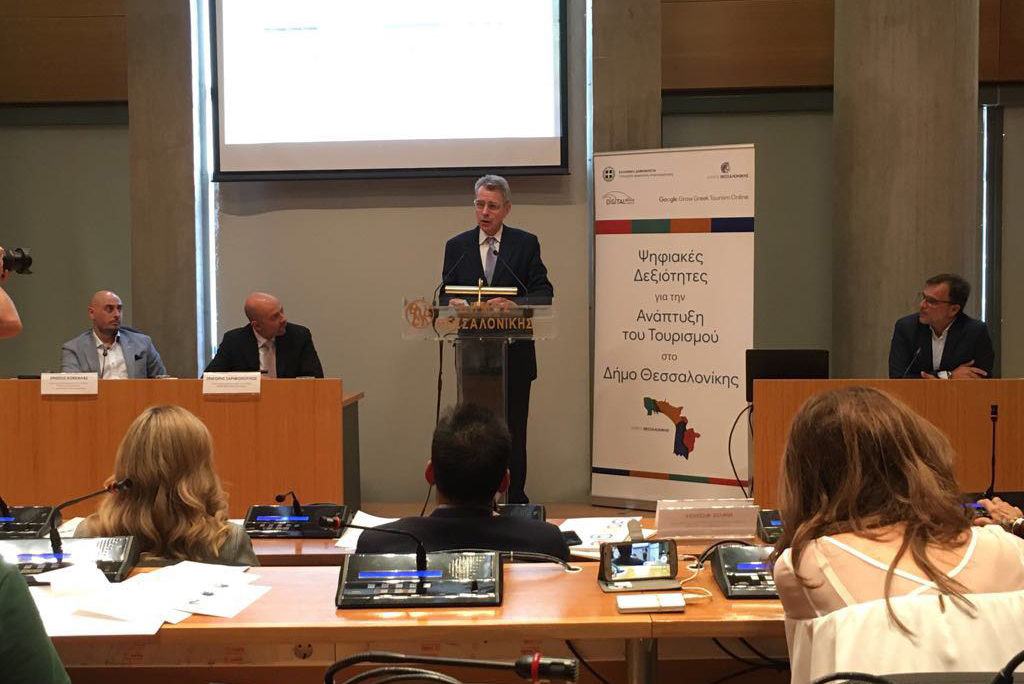 I apologize for coming in a little bit late.  There’s a lot going on in Thessaloniki today.

I want to acknowledge Mayor Boutaris who I think is over there.  The President of the Municipal Assembly.  And I especially want to congratulate and thank Grigori and the whole Google Greece team for this initiative.

I’m from California and as I like to say, one of the things that growing up in California does to you, it makes you a great believer in the transformative power of technology, and I’ve seen that dramatically over the course of my three decades as a diplomat.

So when we started putting together the Honored Country, Year of the United States, the Thessaloniki International Fair, I put a big emphasis on bringing in the best of American technology, American innovation, and was especially focused on finding ways to catalyze new relationships, new ties between American technology companies — Google, Facebook, Microsoft, Cisco — all the majors that we see at our pavilion.  And the people and the entrepreneurs of Greece in ways that would add value and create growth.

I’m a special fan of what Google is doing in Greece.  The Google Arts and Culture program is fantastic.  I was really proud to have the opportunity to share with Prime Minister Tsipras and Secretary Ross as we walked through on Saturday the big wall, the video wall that shows off, among other things, what Google Arts and Culture has done with the Acropolis marvels and the ability to have there a level of understanding that actually goes beyond the [inaudible].

So I want to congratulate Spiros, Nikos, all of the members of Mayor Boutaris’ team who have been part of this initiative, and I want to emphasize how much we at the embassy support what Google is doing in this partnership with the city of Thessaloniki.

I think I’ve been to Thessaloniki more than any American ambassador has in the job.  In part, because I love the food.  I love the people.  But I also love the culture.  Macedonia has a really distinct culture.  It has fantastic touristic openings.  Not just the beaches or the museums.  And I’m absolutely convinced with a little more work this region of Greece can have a tourist season, if we can use that word, that really stretches 12 months out of the year.

I’m grateful that Mayor Boutaris has been so generous in helping to share with me some parts of this region that you don’t see with Thessaloniki tourist guides.

I always say that Greece’s greatest resource is its people.  But after the people, you have such a special, special country in terms of culture, the food, the heritage.  And this Google Initiative offers a way to monetize that.  To help bring it to market in a way that will create economic opportunity, in a way that will grow an increasingly important part of the Greek economy.

It’s amazing to me that tourism now accounts for close to one-quarter of overall Greek GDP once you add in all the different components there.  It’s growing fantastically.  From the United States, I was very proud of the fact, I wish I could take credit for the fact that the widely-read New York Times weekend travel section recently had 36 hours in Thessaloniki as their weekend feature.  We’re going to have more direct flights including ____ flights coming in, making it easier for Americans to discover this part of Greece.

It’s different from Mykonos, Santorini and the Acropolis, but no less Greek.  And it’s just as enjoyable.

So I’m really proud of this project.  Again, I want to congratulate everybody at Google, and I very much look forward to seeing the results.  And as I said to Mayor Boutaris, I see the Thessaloniki International Fair not as an end point but as a launching pad for an even more intensive period of U.S. engagement with Greece, and I’m proud of the fact that this new partnership between Google and the municipality of Thessaloniki will be part of that.