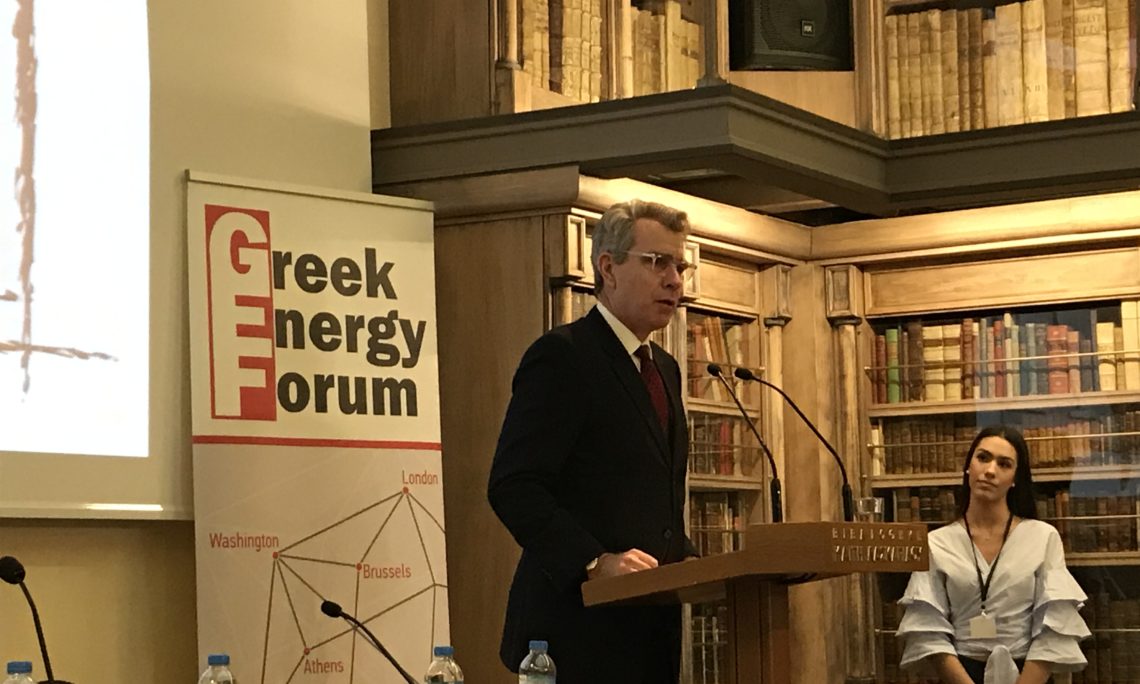 Καλημέρα.  Good morning everybody. Vice President Sefcovic, Rector Kotios, Ari, Dimitri, thank you very much for having me here today. I want to begin with a special thanks to the University of Piraeus and the Greek Energy Forum for giving me the opportunity to discover this beautiful Laskaridis Foundation building. What a fantastic hidden gem this is here in Piraeus. It’s a special honor for me to be speaking in conjunction with Vice President Sefcovic in light of the enduring and critically important partnership between the United States and Europe in working to advance our shared goals of European energy security.

Over the past few years, the United States has made it a priority to work with our European partners and with Greece in particular to develop secure supplies of energy in this region through diversification of energy sources.

As Secretary of Energy Rick Perry has stated, “The United States is committed to ensuring universal access to affordable and reliable energy to promote economic growth and energy security.”

These efforts have never held more promise, or been more critical to the security and development of Europe, than they are now.

Just look where Greece sits, at the geographic nexus of so many of these energy security efforts.  Just 30-minutes or so north of Alexandroupolis, the Trans-Adriatic Pipeline will connect to the Trans-Anatolian Pipeline, allowing gas from Azerbaijan to flow into the European market.

And as I’ve remarked after my own visit to the TAP construction sites this summer, I think there are very few people in Athens who appreciate the ambition or the significance in terms of investments and transformation of the energy sector of Greece that the TAP project represents.

As progress is made on that critical piece of the Southern Gas Corridor, the United States is actively supporting another key link in our joint efforts to move new, non-Russian gas into European markets, that is the Greece-Bulgaria Interconnector.

The IGB pipeline will provide a route for new sources of gas – whether from Azerbaijan, U.S. LNG, or elsewhere – to enter a market that has long depended on a single supplier.  The Greece-Bulgaria Interconnector will allow new gas to reach not only the countries along the TAP route – Greece, Albania, and Italy – but countries further north, bolstering energy security as far away as Ukraine.

To maximize the utility of the IGB, a consortium is working with U.S. support in Alexandroupolis to create a floating storage and regasification unit that would serve as a new entry point for LNG into Greece and the Balkans.

These projects, as well as the expansion of the Revithoussa LNG terminal here around Attica, are creating the infrastructure to bring new sources of natural gas into Europe, putting greater power in the hands of consumers and diluting the influence of suppliers who have used energy as a tool of political coercion.

To this end, the Baltic states and several Central European countries are also developing regasification terminals and interconnections that are transforming regional energy markets. The arrival of the first U.S. LNG exports in Lithuania and Poland signifies a tectonic shift that is occurring in the natural gas market as U.S. LNG begins to come online.

Make no mistake — we are eager to see U.S. exporters succeed in marketing LNG from the United States.  But the real winner from these projects will be the consumer, as the European gas market begins to enjoy the benefits of true competition.

Here in Greece and the Balkan area, you have the opportunity to reap the advantages of a more diverse market as well, by implementing the projects I’ve already outlined and others that will link regional energy infrastructure. There are few regions where providing options for energy and breaking the leverage of monopolies is more critical than in the Balkans.

President Trump discussed these matters at some length with Prime Minister Tsipras on October 17, and noted publicly our appreciation for “Greek contributions to European energy security through its support of the Trans Adriatic Pipeline, the Greece-Bulgaria Interconnector, and liquefied natural gas facilities that are capable of transporting diverse sources of energy to Europe, including potential liquefied natural gas exports from the United States…These initiatives make both our people safer and create good jobs for our hardworking citizens.”

In this regard, I should add, having joined Prime Minister Tsipras in both Washington and Chicago, that the energy security agenda was a prominent feature of his interventions throughout his presentations in the United States.

Of course, there is no expectation that U.S. LNG or other sources of gas will entirely supplant Russian supplies.  It’s clear that Russian gas will continue to supply a significant percentage of European gas demand.  However, it should do so in a competitive market.

More importantly, the sources of supply should be balanced, so that European countries will no longer face the prospect of Russia “turning off the spigot” for political purposes.

I witnessed this dynamic unfold during my time as Ambassador in Ukraine.  There Russia leveraged its position as a monopoly supplier of gas, and by using its ability to turn the tap on or off squeezed the government in Kyiv to advance Moscow’s political goals. In Ukraine, it took an intensive effort, led by the European Commission, supported by the United States, and a number of key European allies, to introduce a west-to-east reverse gas flow that effectively eliminated Russia’s ability to use its gas resources as a political weapon.

Our combined efforts in Ukraine proved that, as we say in the United States, where there’s a will, there’s a way.  And now similar efforts are underway elsewhere in Europe.

As President Trump made clear when he visited Poland earlier this year, “The United States will never use energy to coerce your nations, and we cannot allow others to do so.”

American companies also play an important role in advancing energy security in the region, and they are attracted by the upstream potential that Greece holds.

While the Prinos field’s production is currently relatively small, Energean, with American investment, has expanded its yield.  Other American companies are also looking at the possibilities in Greece and exploring cooperation with Greek companies in developing upstream sources.

But Greece has also been a leader in building its renewable energy sources, creating expertise that has allowed Greek companies to succeed around the world, including in the United States, where TERNA, a Greek company, has successfully built wind farms.

And I can say unequivocally is that this is an area where Greece has a competitive advantage.  While Greece does not have a monopoly on sun and wind here in Europe, it certainly gets more than its fair share, and your knowledge in harnessing these forces as sustainable energy sources has made American companies eager to do business here and to work with Greek companies.  I was inspired, for instance, to read recent reports about Tilos, the first island in the Mediterranean to run entirely off wind and solar power.  Greece is clearly leading the way as a pioneer in this shift toward renewable sources of energy.

This has resulted in American companies, for example GE Energy, to recommit to the wind market, which it sees expanding across Europe.  In fact, I had the opportunity last June to celebrate GE’s important role in wind energy as that company relaunched its programs here in Greece.

Other energy programs have also the potential to bring in billions of dollars in foreign direct investment and create thousands of jobs, not to mention the benefit they’ll bring by further building Greece’s central position in the regional energy sector.  The United States strongly supports Greece’s efforts to emerge as a European energy hub, providing secure, reliable and affordable energy across the region.

And so we will continue to partner with Greece, the European Commission, and all of our European Allies and partners to advance European energy security, which benefits our shared security and prosperity goals.

So thank you all for your attention, and thanks again especially to the Greek Energy Forum for inviting me here to speak today.  Ευχαριστώ πολύ.