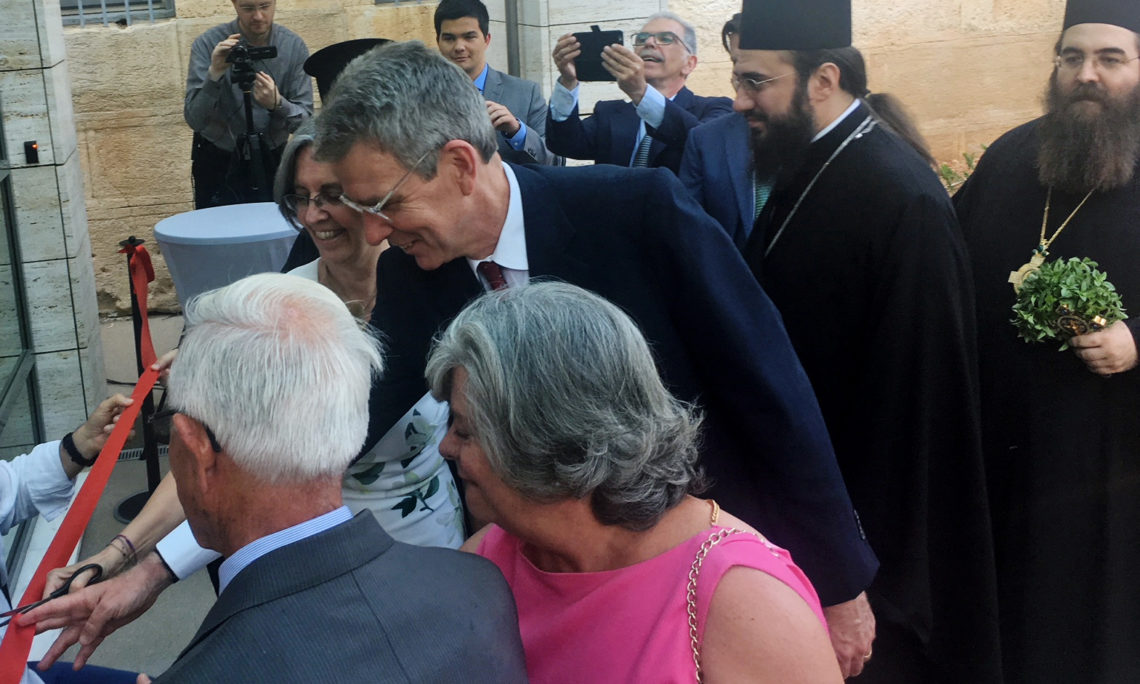 I want to begin, by thanking my friends Dr. Jennifer Neils and Maria Georgopoulou – my favorite librarian – and the entire American School of Classical Studies family for this wonderful event.  I am thrilled and honored to be with you on this occasion.

The American School of Classical Studies is one of the flagships of the American educational presence in Greece.

Over the course of its remarkable history, the school has made invaluable contributions to academic research and understanding of the history, culture, and civilization of Greece and the broader Mediterranean region.

Shortly after I arrived in Athens, I was privileged to receive a tour of the school and its libraries with Jim Wright and others, and to see the new Wing under construction.

I was struck not only by the fantastic treasures that this school and library house and its state-of-the-art facilities, but even more by the obvious delight and pride that every member of the staff exhibited.  It is truly a labor of love.

That palpable enthusiasm for the mission of the American School of Classical Studies is testimony both to the tremendous leadership that this school continues to enjoy, but also to the continued relevance of its mission.

None of this would have been possible without the vision and dedication of the founders of the school, the strong support of the Greek state, and the generosity of its many benefactors, many of whom are here tonight and are leaders of the Greek-American diaspora in the United States.

The American School of Classical Studies has also made a significant contribution to broader relations between Greece and United States.

From the heart of Athens and the ancient Agora, to the classrooms and libraries of universities throughout the United States, and even at the Embassy where we have at least one ASCS alumnus on our staff, the school has constituted a critical bridge between our two countries.

It is a symbol of the “enduring ties” between the United States and Greece, and also of the debt we in “the West” all owe to the Hellenic world and this great civilization.

The expansion and renovation of the Gennadius Library, including the Ioannis Makriyannis Wing, will strengthen the academic, research and outreach roles of the School.  In particular, it offers a new welcoming venue for both American and Greek researchers and importantly the general public who I hope will learn more about the school as a result.

I’d like to congratulate the School’s leadership, donors and staff for the opening of the new wing.

With the continued investment of the American School of Classical Studies in the cultural and academic life of Greece, I am confident that the school will remain a living monument to the long-standing cultural and educational ties that bind our two countries.

Before concluding, allow me to say that the American School of Classical Studies at Athens is, above all, a story of true Philhellenes, who regardless of their origin, bring to light the historical riches of one of the world’s most culturally and historically significant locations.

Allow me to join their ranks and congratulate Dr. Neils, the school’s faculty, staff, students, and benefactors for the important work that you do, and to wish you all the very best in this new era for the institution.

Thank you very much for inviting me to share in this wonderful celebration. Καλό ταξίδι