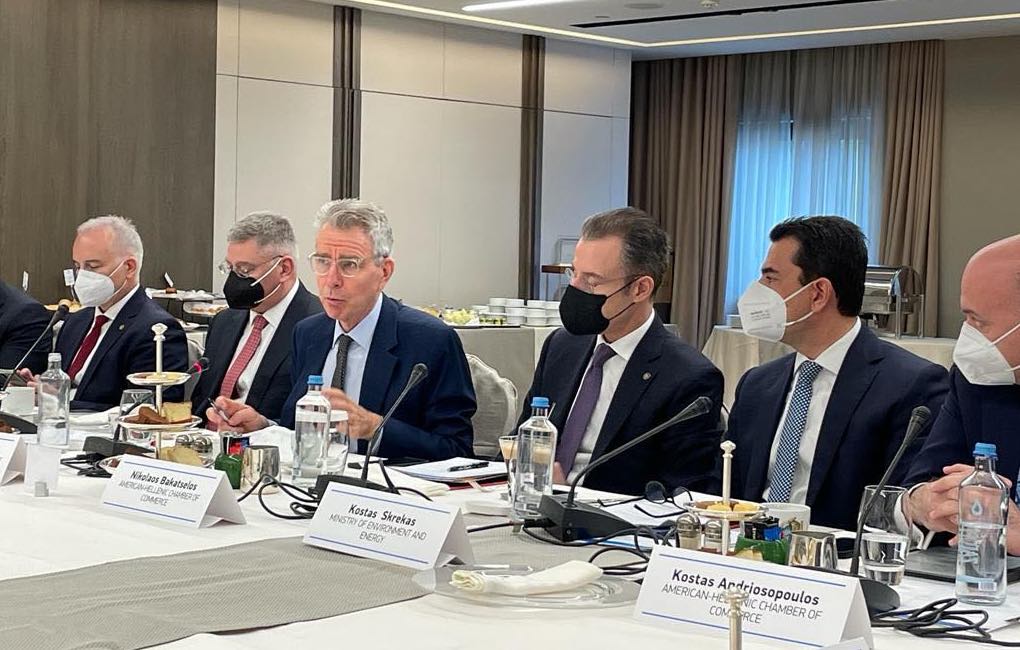 Thank you Niko for the invitation.  Minister Skrekas, thank you for coming out early this morning.  Elias, it’s good to see you.  And Katerina, congratulations.  I agree with the vast majority of what you said so I’m going to keep my remarks very brief.

I want to start, though, with something Ben alluded to, which is the partnership between Atlantic Council and AmCham.  I really want to applaud the progress there.  This is something I have worked on six years now, really since my arrival.  It was focused on my intent to frame the U.S.-Greece relationship in a broader strategic context.  Few issues capture that better than the energy issue, because of how the energy cooperation between Greece and the United States rests on converging strategic interests, but also spans multiple geographic domains.

Again, congratulations to all of my friends at the Atlantic Council on all of this as well.

Just picking up on what Katerina finished with, one of the tasks that I see as I begin to hand off the baton of this relationship, is to make sure that people in Washington and the broader strategic community in Washington grasp both how far the bilateral relationship has evolved, and few things reflect that better than the leadership that Prime Minister Mitsotakis and his government have shown on the response to Ukraine, but also continuing this effort to think about U.S.-Greece relations not in a narrow Greece-Turkey Aegean maritime context but in a much broader framework.

A couple of other quick points.  One, just to reemphasize something that Ben alluded to which is Ukraine changes everything.  We have to all recognize that the world after February 24th will be different from the world before February 24th.  The Minister and I were talking earlier, it’s hard to predict how this war is going to end in part because it depends on one guy.  But it’s very clear that it will be a strategic defeat for Russia, that Ukraine — and this was not a given on the 24th of February — Ukraine as an independent, sovereign country with its capital in Kyiv is going to continue, and all of the revisionist inclinations that led to this brutal and unprovoked invasion are still going to be there in Vladimir Putin’s mind.

So the world is going to have to live with this.  Obviously the reality of Russia’s actions has accelerated an overdue reassessment by Europe of its energy dependence on Russia.  Greece was ahead of the curve in that regard.  I always point out to people the TAP pipeline was the first major energy infrastructure constructed in Europe specifically to bring non-Russian gas to European markets — and thank goodness it was completed in 2020.

Likewise, the IGB pipeline, which we all remember the conversation back in the fall in Thessaloniki with my dear friend Herro Mustafa and Herro saying IGB, IGB, IGB.  But for Bulgaria it is so important that that pipeline now is close to completion.  The challenge in the months ahead is as Katerina alluded to, how to identify the largest volume of non-Russian sources of gas for European markets in particular while at the same time accelerating our work on the energy transition.  And those are not contradictory objectives in my mind.

It’s been a real pleasure to be part of this conversation.  I look forward to seeing the final report.

It’s important also to recognize all the progress that’s been achieved, and I really want to congratulate Minister Skrekas in that regard.  Looking at what has been accomplished since the last conversation we had on these issues at the Greek Economic Summit in December.

DESFA is continuing to move forward on the North Macedonia Interconnector.  These relationships with the Balkan countries that are 100 percent dependent on Russian gas right now are vitally important.  Serbia particularly so because the Serbian government has some big decisions to make about its future relationship with Russia.

Finally, I would also point out, and I’m very eager to hear the Minister’s update on this.  I met last week with 547 Energy which told me that they are very close to the final, final, final approval of their Vermio Project which will become the largest on-shore wind project in all of Greece, the largest U.S. investment in the energy sector, and the 547 team told us that they have now got all their financing lined up.  Their intention is to begin moving dirt this summer, assuming that all the final signatures are received.  And again, Minister, I congratulate you on pushing that forward.

The last thing I would note is we’re obviously, as Katerina alluded to, very, very supportive of everything that’s happening in terms of interconnectors.  There’s been a lot of media over the past three months about the East Med pipeline and the famous non-paper.

What I would emphasize is we support interconnections.  We think that on questions of East Med gas the challenge is how to get that gas out of the ground and into European markets as fast as possible, and that probably means some form of liquification.  And third, we’re very excited also about pivoting to renewable options, these electricity interconnectors.  We’ve been very supportive of the Euro-Asia Interconnector.  Glad that EU financing has lined up there.  We’ve been talking to Copelouzos about the project to bring electricity from Egypt to Greece.  I’m interested to hear how that stands, particularly Minister, in terms of getting European financial support for that project.  But these are all things which point to the importance of this East Med relationship.

One of my legacies in this job that I’m very proud of is the 3+1 process which the United States remains strongly committed to.  We will have more to say about that over the next couple of days as I host both our brand new Deputy Assistant Secretary for Energy in the State Department, Laura Lochman.  And then the day after Victoria Nuland, the number three official at the State Department who was actually with Senator Menendez on Thursday talking about some of these same issues and will come with a very ambitious agenda.

So again, congratulations to the Chamber, but also to Atlantic Council and Minister, just to say how grateful we are for your leadership in this area, and also for your support of all of these efforts to build the energy relationship as one of the strongest elements of the U.S.-Greece relationship.

To the Energy Committee:

Thank you, Niko, and thank you Minister for joining us today.  It’s really important that we have this discussion with AmCham particularly given the central role that energy cooperation plays in the broader relationship between Greece and the United States.  That is reflected in the priority that we gave to energy as one of the pillars of our Strategic Dialogue.  It’s reflected in the very good meeting the Minister had with Secretary of Energy Granholm when they were together in the fall in Poland.  And frankly, every time that senior U.S. policymakers get together whether from the Foreign Ministry or the Energy Ministry, or Secretary Kerry and the climate team, these issues are on the table.

And I will simply echo the Minister in emphasizing how pleased we are that Greece has been ahead of the curve on the two big energy challenges which are going to dominate the next years in Europe.  One, of course, is the issue of diversification and energy security to get away from dependence on Russia — something that has become much more urgent after February 24th and Russia’s invasion of Ukraine.  And the other is energy transition where Prime Minister Mitsotakis really sets the bar for Europe in terms of establishing a bold vision for the phase-out of lignite, for the prioritization of new investment in renewables.

Another aspect of this that has changed dramatically during my six years as Ambassador, which is Greece’s role at the center of a network.  It’s important, and certainly for U.S. policy, it’s important that Greece now is not just a market of 11 million people, it’s also a hub which plays a key role in energy security and diversification with Bulgaria, with the Western Balkans.  Also of tremendous strategic importance to the relationship with the Eastern Mediterranean with Greece, Israel, Cyprus, Egypt in the East Med Gas Forum.  And we’re very, very excited about how we can pursue both of those priorities that I talked about — the climate and energy transition and energy security, leveraging those regional relationships.

Just another couple of quick issues.  I really look forward to hearing from our American companies today.  But just to note how proud I am of the progress we have seen in terms of the American commercial role on energy issues in Greece.  When I arrived here there were zero molecules of US LNG coming into Greece.  Last year the United States account for 50 percent of Greece’s LNG imports.

We have big companies — GE Wind has come back to Greece.  GE Power has important partnerships with both Copelouzos and with Mytilineos and we’re proud of the Agios Nikolaus project is moving ahead.  And I’m also very proud of the fact that GE will be powering the ultra-efficient power plant which is part of the Alexandroupoli complex as well.  GE Wind is actively engaged in the onshore wind sector.

We have an American company 547 Energy out of Texas which is poised to become the largest onshore wind power operator in all of Greece, and Minister Skrekas and I talked earlier about the last mile of that effort.

We’ve got Advent Energy, a Boston-based Greek-American company which went through its IPO while I was here.  It was fun.  The first time in my career that I’ve had the experience of getting to know a company when they were a scrappy startup and then seeing how they were transformed by their NASDAQ IPO and not only all the expectations but also the cash that comes with that.  But Advent plays an important role also in the White Dragon project and Greece’s intention to be a regional leader on the hydrogen energy future.

Blank Charging in the electric vehicle space.  Tesla which does some development work here in Greece.  I’m sure I’m forgetting some others.

I would also note that this is working in both directions.  Yuri and Juhani and I had the opportunity a few weeks ago to visit the Hellenic Cables facility in Corinthos.  That facility is producing the cabling for the first offshore wind project that will commission in the United States, off the coast of Virginia.  But equally important Hellenic Cables is moving ahead with a $350 million U.S. investment in Baltimore, in Maryland, aimed at manufacturing cabling, particularly targeting the offshore wind sector which I think is going to grow tremendously in the United States but also has enormous potential here in Greece as well.

So this is a very dynamic area.  It’s one that I’m very proud of everything we’ve accomplished over the past few years.  And I’m even more excited to see what the future brings.