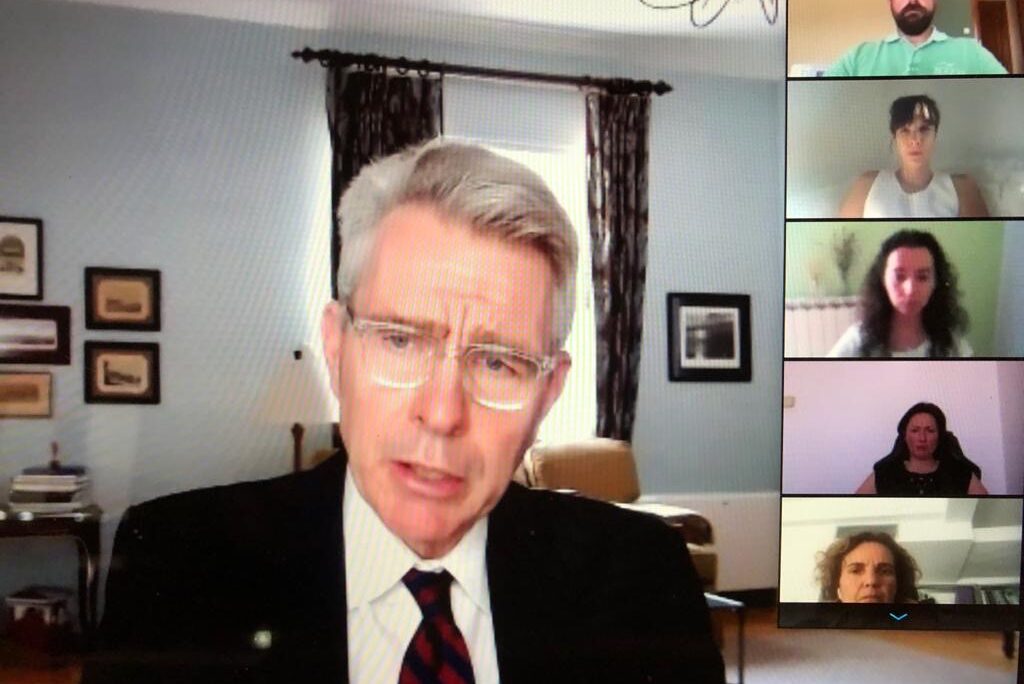 Good afternoon. Καλησπέρα everybody. First of all, Dimitris, Stella, Yiannis, thanks for having me on. Also thank you for doing this. I was thinking, Yiannis and Dimitris, as I heard you guys talking, it was exactly two years ago that we were all up in Thessaloniki for the 2018 Thessaloniki International Fair, which I think everybody looks back on as a real watershed moment in terms of the Embassy’s engagement on issues of innovation and entrepreneurship.

Certainly for me, one of the high points of that event was the partnership we had with your team, Dimitris, and the way in which we were able to leverage the startup pavilion, to really put a bright spotlight on all that was happening in the Greek entrepreneurial space.

Since then, I’ve been up to Thessaloniki twice in the past two months — in August, to introduce our terrific new Consul General, Liz Lee, and then in July to say farewell to our outgoing Consul General Greg Pfleger. And I was really struck then how so many of the seeds we planted in 2018 have now begun to bear fruit — whether that’s in terms of the new technology centers for Pfizer, Deloitte, Cisco, what IBM is doing down here, what Microsoft is doing, all world-class American technology companies that were core parts of our presence at the Fair in 2018.

So when Cindy and I and the Public Affairs team were looking to this year, we were really excited about the prospect of continuing to build on that legacy with a special focus on women in entrepreneurship. And so I was very disappointed, but understood, when the government finally made the decision to cancel the 2020 TIF. I think it was the right decision under the circumstances. But I’m really delighted that in the absence of a real-life engagement we are at least able to set up this afternoon’s virtual discussion to put a little bit of the spotlight on where we’re going in terms of the Embassy’s partnership with Socialinnov on issues around entrepreneurship, and especially the big focus we want to devote to women in entrepreneurship for the next year.

I also want to say thank you to the TechCamp team in Washington, Jessica and many others. I think they will be as impressed as I always am by the quality of engagement that we enjoy with all of our Greek partners.

What we’re doing here in Greece on women and entrepreneurship dovetails and supports what the White House is pursuing, under Ivanka Trump, with the Women’s Global Development and Prosperity Initiative. And I think the idea is to find ways to build networks and facilitate women’s participation in the economy, but I think especially in a place like Greece, where you’ve got of course the global challenge of the COVID pandemic and the slowdown that that has produced, but also the challenge of coming out of a ten-year economic crisis, and helping to reposition Greece and the Greek economy in the way that Prime Minister Mitsotakis highlighted last week when he was visiting the Deloitte Center in Thessaloniki, and highlighting all of the accomplishments there.

Certainly in my experience over the past four years, some of the most inspiring and impressive young entrepreneurs I’ve met in Greece happen to be women. They are people who are carving their own path in industries that will define the future of our knowledge-based economy.

So I’m really interested to hear what the participants have to say today. I’m also very excited, in the larger spirit of the Thessaloniki vision, about the prospect for leveraging Greece’s regional relationships. As we talked about in 2018, Thessaloniki isn’t just the capital of northern Greece, it’s the gateway to a market of 30 million consumers all across the western Balkans. It’s the academic capital of the whole region. It’s a city with a fantastically cosmopolitan history which is beginning to redefine itself.

And I saw that in July when I was visiting the incredibly impressive Science and Technology Center that has been constructed on the campus of Anatolia College with the support of the U.S. government. And I see that in what everybody in Thessaloniki, the governor, the mayor, the very impressive vision that he has for the Cisco Innovation Center, and the way that Cisco wants to leverage that as a platform for working with innovators and entrepreneurs from all over the region, Greece and the wider region of the western Balkans.

So I’m excited that we’re having today’s conversation. I want to reassure you that we are committed to having a real TechCamp, onsite, live and in-person, hopefully in the fall of 2021 in Thessaloniki. And I know that today’s conversation will contribute to helping shape that, and also ensure that we continue to sustain momentum during this pandemic period that we’re all working through.

Thanks very much for letting me kick off. I look forward to hearing some of the conversations today. And again, Dimitris, thank you for the fantastic partnership we’ve enjoyed through so many different programs.