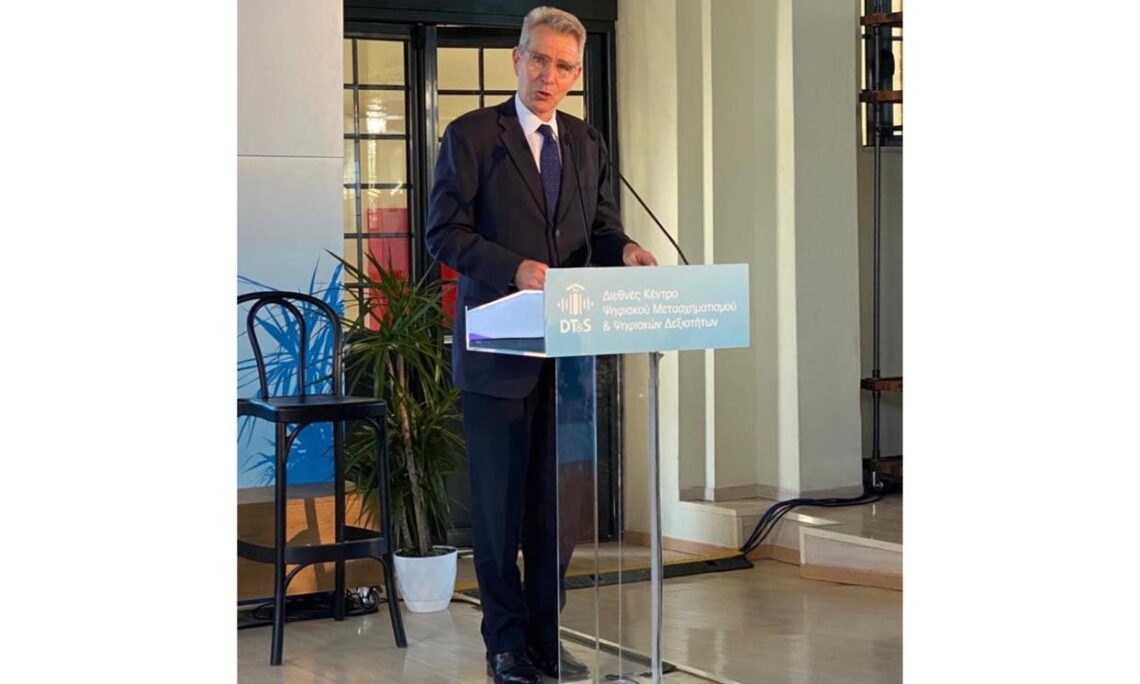 I want to start by saying, this is really a sad occasion for me, my last visit to Thessaloniki.  I said to Mayor Zervas that I very much appreciate the spectacular weather that you arranged on this great day.  I truly have never seen the city lookbetter.

But it’s also such a privilege to have this visit coincide with this conference on the Cities of the Future, organized by the Cisco Digital Skills Center.

I should begin by acknowledging our partner in this enterprise, Mayor Zervas, but also my dear friend, my mayor, Mayor Bakoyannis, and Mayor Papastergiou, who is the first mayor I ever heard in Greece use the phrase “smart cities” on my very first visit to Trikala way back in 2016.

It’s incredibly exciting that this conference has come together in the way it has, bringing together so many different participants from across the wider region.  This was exactly the vision that lay behind our support for the Thessaloniki International Fair in 2018, lifting up the role of Thessaloniki as a gateway to the Western Balkans, and a gateway for American companies looking to a market of 30 million people.  So congratulations to the whole team for making this a reality, and to everybody in CISCO who shared this vision.

I remember the very first time I came into this building with Mayor Zervas.  There was still furniture wrapped in plastic.  The walls hadn’t been fully painted yet.  But it was clear that this could become an incredibly important asset. And I commend the government of Thessaloniki, the city, for making this decision to repurpose this building as it has, really as a symbol of Thessaloniki’s transformation.  And I want to applaud Cisco’s vision in signing up to throw itself 100% behind this initiative.

Cisco is one of the leading American technology companies, along with Microsoft, Google, Amazon Web Services, Digital Realty, all of which have really stepped up to take advantage of all that Greece offers, and to build the strongest possible technology partnership between our two countries.

But really this is a unique asset, in that it was designed not just to highlight Cisco, but to work with all of our partners, and to provide tools that cities need to build a better future that the citizens deserve.

I am excited we have the municipalities of Athens, Thessaloniki, and Trikala all represented here, cities that demonstrate the capacity that Greece has to become an important player in the European technology space, but also to use technology to transform the way governments interface with their citizens, and the way in which democracy is implemented in this country.

The project of promoting smart cities here in Greece and across the Western Balkans is important not just to improve the environment for investment, but also to make all of our democracies live up to the expectation of our citizens.

It’s worth remembering that the proportion of the global population living in cities is going to rise very quickly in the next few decades.  Mitigating the environmental impact of this urbanization becomes critical.  Both the climate crisis and the energy crisis, which we are all facing today, force us to rethink energy consumption.  And the smartification of cities is a key part of the answer to that challenge.

The United States, the Biden Administration, has established extremely aggressive targets for the reduction of greenhouse gases.  But if we’re going to meet those targets, we also have to figure out how to power our companies using significantly less energy.  So by becoming more climate smart, cities can both make themselves more competitive, but also help to confront the emergency of climate change.

Leveraging emerging technologies that American tech companies like Cisco are offering we can help to accelerate the revitalization and rebirth of our cities.  For example, I’m very excited about the new ways in which cities are applying data collected from smart city technology, to allow them to better design their businesses and to work smarter.

And in that regard, Greece provides a particularly important testbed.  As I discussed with some of our biggest technology companies last week at the Delphi Forum.  Greece is not France, it’s not Germany.  It’s not a huge economy where it’s hard to experiment.  But it is a member of the European Union, where the rules and regulations applying here are exactly the same as those applying elsewhere in the EU.  So it’s a fantastic platform for companies, including American tech companies, that are looking to roll out their products, to see how those products can be optimized for European consumers.

In this regard, the smart city concept is not a destination.  It’s a process.  It’s about how to foster collaboration between companies, between technology providers, between public stakeholders, and those who govern us.

And this conference today is exactly the kind of forum that we need to bring our communities together, to share experiences and define how our cities are confront similar challenges and how they can make themselves work better and smarter.  Exchanging best practices and know-how is critical, especially in the tech sector where so much is changing so fast, and where I’m proud to say American companies really lead the way.

I want to finish up with a little story about Trikala.

I had the opportunity to visit Trikala the first time when we brought our Code Girls program to that city.  Code Girls is an initiative of the U.S. Embassy’s Public Affairs Section designed to get young girls, school age, excited about technology, to lift their horizons, and to give them the tools they need to be competitive in the knowledge-based economy.

I was incredibly surprised, but also very excited, when I went to Trikala, and to discover a young, reform-minded mayor, Mayor Papastergiou, who was by far the most enthusiastic proponent of our Code Girls initiative, not only because he believed in these young citizens of his city, but also because he saw the promise of technology to make his government work smarter.

In partnership, I should point out, with Cisco.  So it’s a fantastic example of how these kinds of initiatives don’t have to be restricted to big global cities like Athens or Thessaloniki.  Rather it can be farmed out to the smallest corners of the country in a way that helps connect people, to lift up ambitions, and to make governments as smart and as efficient as possible.

I still remember that day trip of the launch of Code Girls.  I was so excited to meet these young kids.  And it’s really inspiring for me to imagine that some of them are probably now young women, beginning university.  And I hope that at least some of them have stuck with their technology interests and are going to go into tech fields and become the next generation of Greek innovators.

But the other thing I remember from that day is getting up my bike with Mayor Papastergiou and riding around in the city and seeing the kind of engagement that he had with his citizens, his dedication to making the democracy and the government of Trikala work for its residents.

I’m very excited about the role that American technology companies play in that story of rebirth and revival of confidence.  And I’m also very confident that the foundations we laid here in Thessaloniki, at the Thessalonikki International Fair in 2018, with this Cisco Innovation Center, with all the partnerships that are being built by American companies, like Pfizer, like Deloitte, like Cisco, are not the end of the story, but rather our foundation to build an even brighter and more prosperous future in which we both have a stake.

So thank you very much to Mayor Zervas for hosting us, congratulations to the whole Cisco team for making this a reality.  And I’m very, very excited to see what the future brings for Greece, for Thessaloniki, and for all of our technology companies that are going to be such an important part of building this next chapter in our relationship.