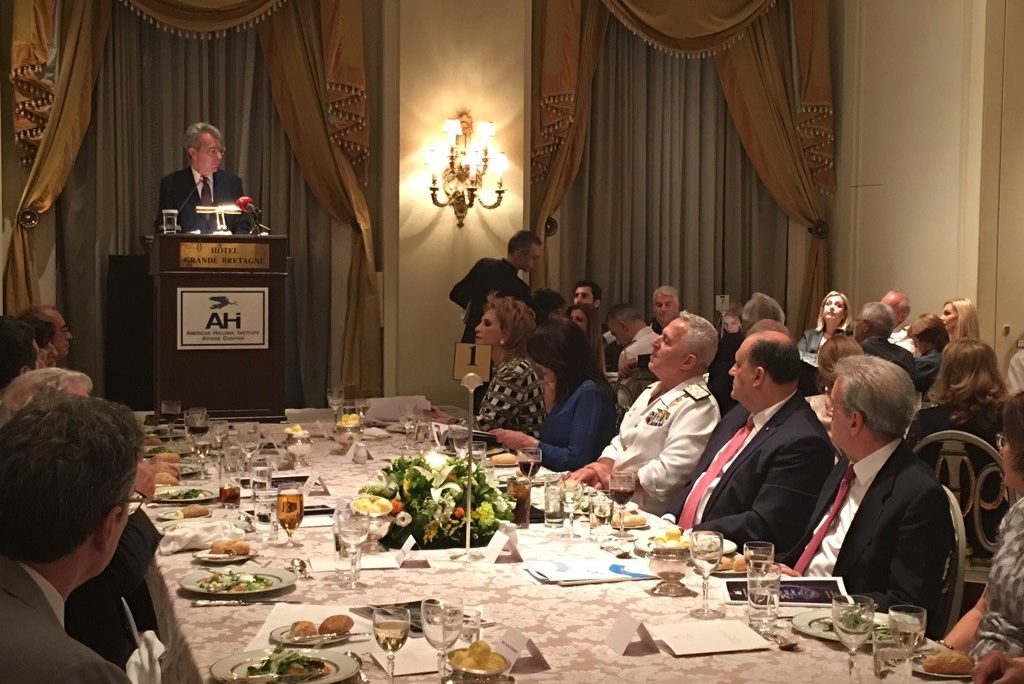 Kalispera. Thank you, Olga, for the kind introduction, and thank you, Nick, for again inviting me to be part of an AHI event that reflects the very close ties that have been forged between Greece and the United States over the years and have been continuously strengthened through the efforts of the Greek diaspora, its representative organizations, like AHI.

The American Hellenic Institute has a long history of advocating for Greeks and Greek-Americans – promoting Greek interests in public policy and highlighting the contributions of individuals and institutions to their communities. Your advocacy strengthens the U.S. government and the profound partnership and friendship between our countries.

You have been of immeasurable help over the past few months in facilitating some of the most important moments in the bilateral ties between our two countries. Nick was actually one of the very first representatives in the diaspora community who I had the pleasure to meet two years ago when I was getting ready for this job, and also played an important role in Prime Minister Tsipras’ visit to Washington last October. In particular, Nick, I want to thank you for enriching Admiral Apostolakis’ schedule during his recent visit to the United States, which was extremely successful and highlighted the close relationships between our military leaders and the great scope for deepening that cooperation.

Next week, Foreign Minister Kotzias will be among the very first foreign ministers invited to meet with our new Secretary of State Mike Pompeo, reflecting the Trump Administration’s intent to continue developing the close relationships at the highest level of our governments.

The Hellenic Armed Forces have taken a leading role in NATO as one of the few countries that is meeting its national obligations. The government’s recent approval for F-16 upgrade program was a great demonstration of the Greek government’s confidence in its Armed Forces, and commitment to modernizing Greece’s defense capabilities. But it is also an important gesture of confidence in the relationship with the United States, and was deeply appreciated at the highest levels in Washington.

The Hellenic Armed Forces has also taken a leading role in the wider region, giving substance to our vision of Greece as a pillar of stability in a very complex region. I had the honor of speaking recently at both the Hellenic National Defense College and the Air Force’s Air Power Conference. Both are great examples of the Greek military’s power to convene regional military and political leaders, as were the recent military exercise at Souda Bay, Phoenix Express, which focused on North Africa, and the very successful Greek Air Force-led INIOHOS exercise, that brought together seven countries, some of them were flying together for the first time.

So, congratulations. It’s been a path-breaking year in our military relationship, and I can think of no better representative to receive this award on HAF’s behalf than Admiral Apostolakis. Aside from his role as a highly respected military leader and someone who, for me, embodies the Greek tradition of seamanship, I am honored to consider him a friend and a partner in all our initiatives to deepen the U.S.-Greece relationship. So thank you, and congratulations, Admiral.

I’d also like to congratulate Professor Panayiotis Behrakis for helping ensure that Greeks stay healthy and fit – and not just for military service, of course. Dr. Behrakis, a proud son of Athens, who worked as a professor at Harvard, is a wonderful example of Greek expertise and talent returning to Greece and contributing to the country – strengthening the diaspora ties that are so important to our relationship.
I appreciate that the work you are doing to protect Greek youth from smoking addiction also involves collaboration with Greek Americans in Boston. It’s a great model, highlighting the excellence we can achieve when we work together and the importance of the networks that AHI and other diaspora organizations do so much to sustain.

So congratulations again to our honorees, and thank you very much to Nick and to AHI for continuing to bring the people of our countries together. It is invaluable work, and I promise you my continued strong support.

And I’ll make one last pitch here for your support as we look ahead to a particularly important phase of America’s long-standing efforts for Greece’s economic recovery. Next month I will travel to the U.S. for the SelectUSA conference, bringing a delegation of Greek business leaders interested in expanding to the U.S. and deepening our close cooperation. I will also be taking a road show to New York alongside the AmCham and Athens Stock Exchange. Then, as I hope you know, these efforts will culminate in September, as the U.S. takes on the role of honored country at the Thessaloniki International Fair.

We have already secured participation at TIF from top U.S. companies, like Google, Cisco, Coca-Cola, Facebook, Pfizer, Lockheed Martin and many others. We have also have planned a high-level delegation, headed by our Secretary of Commerce, Wilbur Ross, and we would like to have the continuing support and the presence of our vibrant and effective Greek American community. We very much appreciate the assistance AHI provided to Minister Nikos Pappas’ TIF road show with Deputy Assistant Secretary Jonathan Cohen earlier this year. So I invite you all to continue and expand these efforts and to participate this September in what will definitely be a major milestone in U.S. support for the end of the bailout programs and, we hope, Greece’s definitive recovery from its long crisis. So we’ll see you in Thessaloniki and again, Ευχαριστώ πολύ.