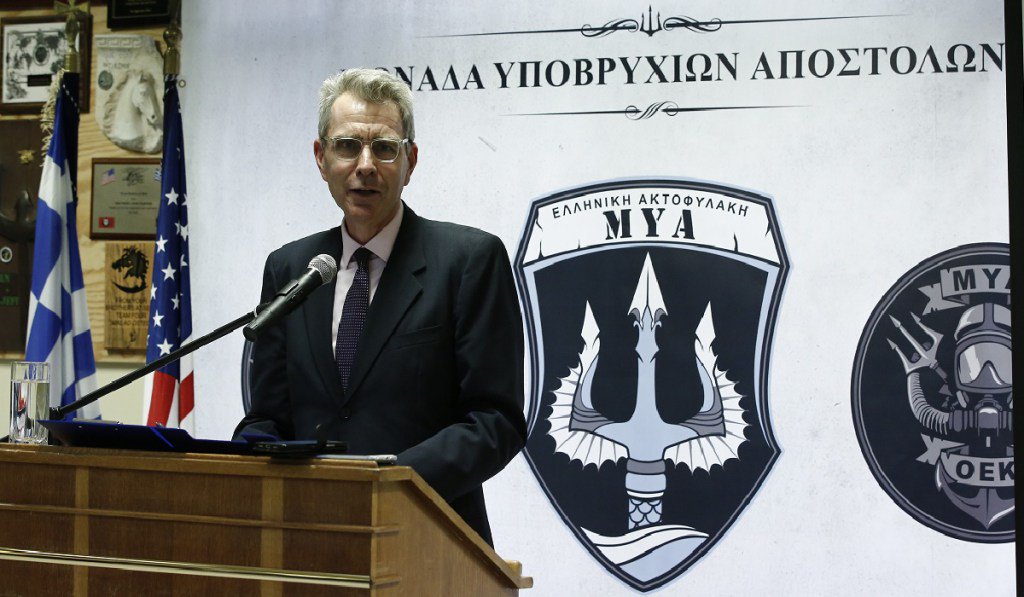 Καλησπέρα, Κύριε Υπουργέ, Minister Kouvelis, Admiral Apostolakis, General Stefanis, General Floros – somewhere over there – General Christodoulou, Admiral Tsounis, Vice-Admiral Raptis, Admiral Pavlopoulos, colleagues and anyone I might have left out, let me start by saying what a huge honor it is for me to be here this afternoon as part of this event. I want to say how impressed I was by the quality of the exercise we just saw, but also by the very important reminder that this exercise provided of the partnership we are seeking to build between the United States and Greece.

I’m especially encouraged to be here today because the training and the equipment we are talking about today happens in the context of an excellent meeting that I had with Minister Kouvelis last month, where we agreed to deepen the partnership between our countries and especially the relationship between our Coast Guards and security forces.

U.S. special operations forces have been working with their Hellenic Coast Guard counterparts since 2014, and they have worked hard during that period to improve both the interoperability of our forces and, ultimately, our ability to achieve mutual security goals in the complicated region that Greece occupies. I want to say special thanks in this regard to the many special forces operators who have been part of this training effort over these years. I have been struck in all of my conversations with the American officers who have participated in this program about how they universally describe the professionalism, the excellence and the commitment to partnership of their Greek counterparts.

During this four year period, U.S. special forces have also identified equipment shortfalls that have constrained the capability of our Greek partners. And so, working with the U.S. Embassy’s Office of Defense Cooperation, we have created an equipment funding initiative.

So far, I am proud to say that this initiative has already provided close to $10 million worth of equipment and training, and there are plans in place for an additional 15 million U.S. dollars in capacity building initiatives, including Joint Combined Training Exercises, Partnership Development Programs and Subject Matter Exchanges and equipment provided to the Hellenic Coast Guard. So today, we are here to mark the tremendous success of this initiative.

We believe that equipment and training like that that we have already provided will improve the MYA’s operational capabilities and make it an even better partner in our joint security cooperation. The United States sees Greece as a pillar of regional stability, and I think this Building Partner Capacity initiative over the past four years is a great symbol of that vision for our relationship with Greece. So, I look forward to seeing how Greece continues to capitalize on these new capabilities and how the government continues to empower the Coast Guard, how we work together to develop the kind of joint and cooperative capacities that were so impressively displayed today, and how the United States continues to deepen our alliance and partnership with the Hellenic Armed Forces. So thank you very much, ευχαριστώ πολύ, for letting me be part of this important event.

Thank you. It was a great event this evening, and I especially want to give kudos to all the officers and the operators from the Hellenic Coast Guard special forces on a very impressive exercise today. It was also great to see all the equipment that we have delivered to Greece, and the capacity, the ability of Greece to perform its role as a regional security provider and a pillar of regional stability. I was very glad to hear Minister Kouvelis using the same phrase, and I think that reflects the convergence both in our interests but also in our strategic perspectives. So, this was an important day. I also want to congratulate all of the units that we saw in the earlier exercise – very impressive to see the quality of the professionalism and the special skills but also the teamwork and the interoperability displayed between all the different Hellenic forces that were working today. And I want to emphasize that every one of those units we saw was a Greek unit. And I think that is a very strong message about the capacity that Greece has to deal with the challenges that this complicated region can present. So thank you all for being here today. Ευχαριστώ πολύ.