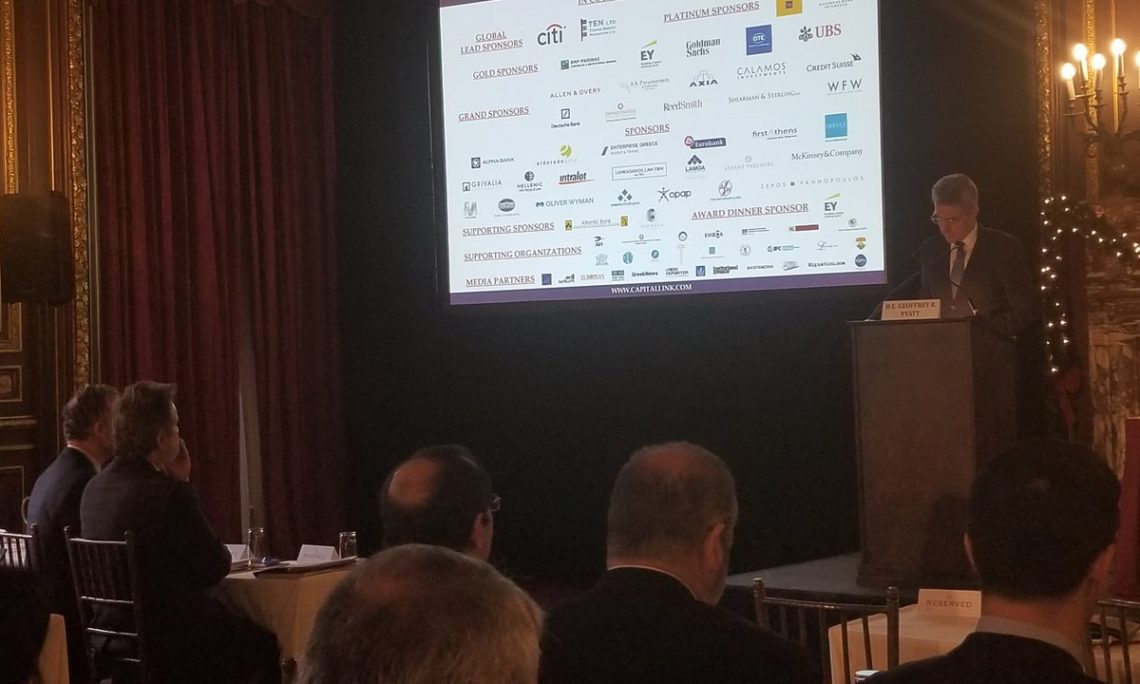 It’s terrific to follow such an optimistic presentation.  I’m not a finance guy – I’m a diplomat and usually the optimist in the room. But it’s a very encouraging message we just heard.

I want to thank Nicolas, Olga, and Capital Link for organizing this conference today. It provides a perfect venue to advance the discussions we started when Prime Minister Tsipras visited Chicago and Washington in October.

My presence in New York today reflects the U.S. government’s hopes for Greece’s economic recovery and our commitment to do all we can to strengthen our commercial ties, support Greece’s exit from the crisis, and attract more U.S. investment in Greece.

I saw a lot of heads nodding during Minister Tsakalotos’ presentation over lunch, where he talked about working himself out of a job over the next couple months, but I’m also particularly pleased to be here in New York with Minister Papadimitriou, who – along with our Secretary of Commerce Wilbur Ross – is chairing a new bilateral investment committee, which is meeting regularly to advance the issues involved in sustaining and deepening the Greece-U.S. trade and investment relationship. The fact that Minister Papadimitriou will be traveling to Washington tomorrow for a follow-up meeting with Secretary Ross demonstrates how committed both our governments are to this agenda.

I also appreciate the opportunity to comment a little bit on the energy sector, which is one of those parts of the Greek economy experiencing the progress we just talked about, presenting enormous potential for U.S. investment but also has great geopolitical importance for Greece, the United States, Europe, and the entire region.

Greece’s location at the crossroads of Europe, Asia, and the Middle East has affected its history for the ages.  That geostrategic importance has informed U.S. policy for many decades, and today it shapes our approach to Greece’s emerging role as a European energy hub – an issue that featured prominently in Prime Minister Tsipras’ visit to Washington and his comments last week at the American Hellenic Chamber of Commerce’s annual Greek Economy conference.

As you all know, Greece already hosts a number of key natural gas projects that play a central role in Europe’s strategy for energy security and supply diversification.

The most prominent of these is the Trans-Adriatic Pipeline, which will connect to the Trans-Anatolian Pipeline and allow Azeri gas to flow into the European market.  This ambitious project is the culmination of the immense efforts to provide a Southern Corridor for new sources of gas to enter Europe.  The support that both the current and previous Greek governments have provided this project have been key to moving it forward.  This multi-billion dollar project, one of the largest green-field foreign direct investments in the country, is a great example of the private sector working with the government to overcome obstacles and realize an investment plan after years of work.

I had the opportunity to visit the route and to witness the massive undertaking of building a transmission pipeline across the country.  The construction of this project is being undertaken largely out of site in the hills and fields of northern Greece, but it has the potential to play a transformational role in the European energy map and views of Greece as a destination for large-scale foreign investment.

Of course, like most large direct investments, TAP requires continued cooperation between the private sector and the government in order to ensure its ultimate success, both while it is being constructed and once it’s in full operation.  I am confident that the Greek government will continue to do all that is necessary to see TAP fully realized, and certainly the United States will support that.

But TAP is not the end of the Greek natural gas story. We are also eager to see the Greece Bulgaria Interconnector come to fruition as a vital link in a vertical corridor that will allow natural gas to flow from TAP, Revithoussa, or the proposed LNG terminal at Alexandroupolis to Bulgaria, Serbia, and other European countries even further north.

The vision of a fully interconnected energy market in Europe with Greece as its southern hub is one that the United States shares with our European partners.  A fully interconnected market will help ensure that Europe has access to affordable, reliable, diverse, and secure supplies of energy, which as Secretary Tillerson recently remarked, is “fundamental to [American] national security objectives.”

From the U.S. government side, we are liberalizing rules governing the export of liquefied natural gas and U.S.-produced crude. As Secretary of State Tillerson noted, “we’re eager to work with European allies to ensure the development of needed infrastructure like import terminals and interconnecting pipelines to promote the diversity of supply to Europe.” In this way, we ensure that no country from outside Europe’s Energy Union can use its resources or its position in the global energy market to extort other nations.

These efforts also present real opportunities for U.S. companies interested in supplying energy and energy technology to Europe. And it is clear that the Greek government is eager to see U.S. investment and increase commercial activity in this strategic sector.

President Trump discussed energy security issues at some length with Prime Minister Tsipras on October 17. He expressed America’s appreciation for “Greek contributions to European energy security through its support of the Trans Adriatic Pipeline, the Greece-Bulgaria Interconnector, and liquefied natural gas facilities that are capable of transporting diverse sources of energy to Europe, including potential liquefied natural gas exports from the United States.”  President Trump further noted that “These initiatives make both our people safer and create good jobs for our hardworking citizens.”

In addition to natural gas supply and transmission, there is also U.S. interest in Greece’s upstream potential.  While the gas fields of the northern Aegean are for now relatively small, Energean, with American investment, has expanded the yields there.  Energean is now looking also to the Ionian region, while other major American companies are pursuing possibilities in Greece and exploring cooperation with Greek companies in developing upstream sources.

The development of a new LNG terminal near Alexandroupoli in northeastern Greece as well as the expansion of the Revithoussa LNG terminal, which I recently visited outside of Athens, are creating the infrastructure to bring new sources of natural gas into Europe, including – we hope – from the United States.  In so doing, we put greater power in the hands of consumers and diluting the influence of suppliers that have for too long used energy as a tool of political coercion.  This is nowhere more important than in the Balkans, where over the last two years we have seen a dramatic increase in Russian malign influence efforts, culminating in the attempted coup in Montenegro last October.

We all know that for years Gazprom has had a monopoly or near monopoly in supplying gas to most of this region, but that is now coming to an end, and Greece is playing a central role in creating the infrastructure that will allow market forces to prevail.

We understand that Russian gas will continue to supply a significant percentage of European gas demand; however, it will do so in a competitive market.

I would underline that, from a U.S. perspective, projects that further strengthen the reliance on Russian gas, such as Nordstream 2 and the onshore portion of ITGI Poseidon, will not facilitate competition or diversity of supply, and will ultimately work against the interests of Greece and other European countries.

To that end, I would like to return to the opportunities presented by American LNG.  The arrival of U.S. LNG to both Poland and Lithuania has signified the tectonic shift that is occurring in the global natural gas market as U.S. LNG begins to come online.

The U.S. obviously wants to see our LNG exporters succeed, but we also believe, along with Greece, that the real winner will be the consumer, as the European gas market begins to experience true competition.  I am hopeful that Greece, as it continues to move forward with energy market liberalization, will become Europe’s third importer of American LNG, something Prime Minister Tsipras announced specifically in Washington.

We have already seen U.S. companies doing well in Greece’s energy sector.  GE Energy, for instance, has expressed its confidence in the wind market, which it sees expanding not only in Greece, but throughout Europe.  I was able to participate in an event this past June celebrating GE’s important role in wind energy in Greece and hope to see it in the rest of Europe. Add in Greece’s enormous solar potential and you can see why there is so much potential in the Greek renewables sector – where I regularly am asked by Greek local officials, “please introduce me to some American companies.”

Other energy projects, whether via privatizations, exploration and production of hydrocarbons, lignite power generation, or the development of renewables, have the potential to bring in billions of dollars in foreign direct investment and create thousands of jobs in Greece.  Not to mention the benefit they’ll bring by further building Greece’s central position on the European energy map.

So we will continue to partner with Greece, the European Commission, and all of our European Allies and partners to look for opportunities that are not only good business but also to advance European energy security, as well as our shared security and prosperity.

In closing, I would also like to draw your attention to what I see as a unique, even once-in-a-generation, opportunity for all of us this next year when the United States will be the honored country at the Thessaloniki International Fair, something that has not happened in decades which you heard Mr. Tsipras speak about in his introductory video this morning.  TIF is the largest commercial tradeshow in Southeast Europe, and President Trump committed to showcasing American technology, enterprise and innovation there as well as to send a high-level U.S. delegation.

The TIF organizers expect to see some 300,000 visitors this year, following President Trump’s commitment, and we expect to go big, to really highlight the incredible U.S.-Greece bilateral economic relationship, as well as all the benefits that come from partnering in the U.S. market-based, open business environment.  The energy sector will be critical to this effort, and I very much hope to see many of the companies active in that sector present there at TIF.

So, I encourage all of you to join us and the American-Hellenic Chamber of Greece next year in Thessaloniki to help highlight the best of the American private sector and the best of Brand America. I look forward to a very productive conversation here at Capital Link and to a new year full of growing investments and partnerships between the United States and Greece.  Thank you very much.