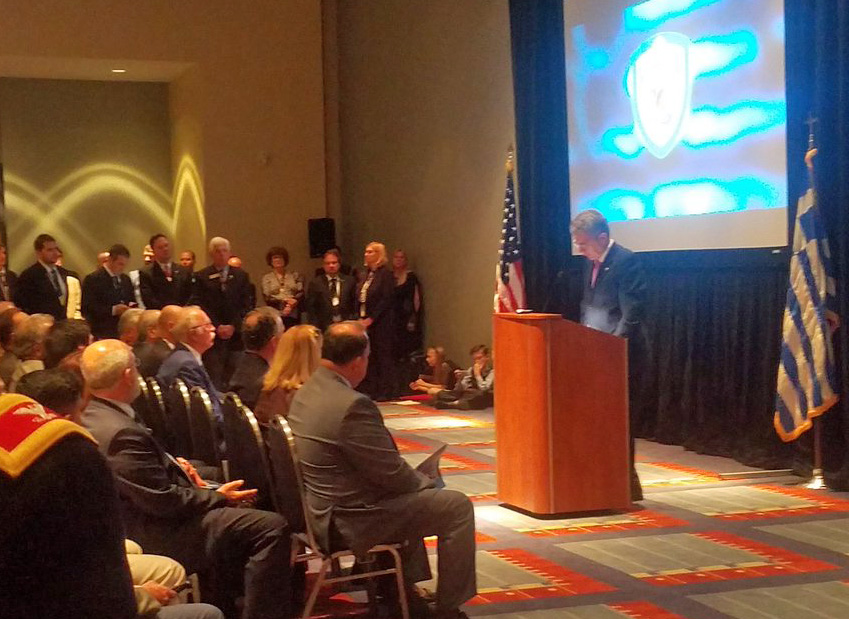 Thank you, Minister Vitsas, it is an honor to travel with you and your team for this important meeting that brings our countries together to strengthen our economic and defense relationship just before Prime Minister Tsipras’ big visit to Washington and Chicago. The defense and security cooperation we’re discussing here and earlier today at the Pentagon will definitely form part of the agenda between our leaders — symbolizing the close partnership between our countries.

And I can tell you based on my discussions today with colleagues at the White House, State Department and Pentagon that everyone in the Administration shares the Prime Minister’s ambitious vision for this visit.

Thanks also to Simos, who has kept the Hellenic-American Chamber of Commerce at the forefront of our efforts to support Greece’s economic recovery and to encourage U.S. companies to explore commercial opportunities in Greece.

I’d also like to recognize and thank Thanasis Kouimtzis, who traveled for SelectUSA earlier this year and has organized the first Chapter of AUSA in Greece, another milestone in our bilateral relationship.

Greece is a pillar of stability in its region.  We cooperate closely in advancing freedom and security in the Balkans, the Eastern Mediterranean and the broader region. And Minister Vitsas has been a strong proponent for expanding the excellent cooperation we have at Souda Bay, which strengthens our alliance and every day helps us to accomplish military missions in support of global peace and security.

It is also important to remember that Greece is one of a small handful of countries who regularly meet their NATO defense spending commitments and, because of its strategic location, has a very deep understanding of the importance of maintaining a strong national defense.

So, what’s at stake here is not just the increased business partnerships that arise from our defense relationship and Greece’s gradual economic recovery, but also increased defense capabilities that are mutually beneficial and support our NATO commitments and ability to make the world a safer place.  Our interest in supporting Greece’s full exit from the economic crisis of the last eight years is based in our understanding of Greece’s critical role as the region’s pillar of stability. The stronger Greece is, the safer its regi‎on will be.

Many American companies, like Lockheed Martin, Raytheon and ATK, clearly agree, as they have  established strong business partnerships in Greece.  And Greek defense companies such as IDE/Intracom, Hellenic Defense Systems and Theon Sensors are already working with American firms and competing globally. However, there is definitely more interest from American companies, hoping to get involved in Greek ports, in the energy sector, and also in civil aviation as the Greek market rebounds.

On Friday, I was at the Thessaloniki Summit, where I spoke about our efforts to support Greece in its economic recovery and, specifically, about ways to support Greek innovation and increase its foreign direct investment, especially from the U.S. I’d like to reiterate a few of the points I made there tonight.

American and Greek companies alike seek a favorable, predictable and stable business climate, and Greece’s legal and bureaucratic system should support these companies and potential investment. Businesses don’t mind paying taxes, as long as paying taxes affords them stability and an environment to grow.

The privatization and sale of public properties is also an important step in the right direction.

Last, to attract reliable and sustainable investment, there must be an expectation of transparency and full knowledge of all the partners in any business deal.  American companies are well known for their transparency, for their adherence to the Foreign Corrupt Practices Act, and for their respect for the rule of law in general.  I believe that’s a unique and important advantage of doing business with U.S. companies, one that’s not found with some of Greece’s other partners.

Importantly, our economic and commercial relationship is also not just deals in Greece or in the United States.  For instance, Mytilineos and General Electric just signed an EPC deal for a power plant in Libya that will help that country reduce power shortages and modernize a critical sector.  This illustrates how Greek and American companies together can drive growth and achieve commercial success in regions of strategic importance.

And we are certainly working more and more with Greece both on a regional and bilateral basis.  Later this month, Trade Winds, a U.S. Department of Commerce organized trade mission to Southeastern Europe, will bring a delegation of U.S. companies to Athens to explore the Greek market and potential partnership opportunities.

This December I will be coming back to the U.S. again, this time with Minister Papadimitriou, Minister Pappas, Minister Kountoura and many others for the Capital Link Forum in New York to get the word out on opportunities here to build trade and investment ties.

In June of next year, I’ll return to the U.S. with what I hope will be a record showing of Greek companies for the next SelectUSA conference.  As I noted, Kouimtzis equipment came last year, and Athanasios, I trust you’ll be back again next year.

I can also cite another Greek company, Pyramis, as a good example of what can happen at SelectUSA.  Pyramis produces more than 1.5 million stainless steel sinks per year and exports 98% of its products.  It is a top supplier for IKEA and for the U.S. market in particular. It has maintained quality and global competitiveness through investments of more than 17 million euros over the past decade in new technologies and automation.

The company is growing globally and is currently considering new investments in the U.S., having taken the opportunity of SelectUSA to begin a dialogue with several U.S. states for an additional U.S.-based manufacturing plant.

And, last, I’m extremely excited that we’ll be the country of honor next September at the region’s largest business and trade expo, the Thessaloniki International Fair.  It’s something I know is on the agenda for the upcoming White House meeting, and something that will contribute greatly to strengthening the economic ties that bind our countries.

I’ve been travelling frequently to Greece’s North already to discuss how best to showcase America at the fair, our interest in investing in Greece and northern Greece, in particular, and how best to ensure that the fair has lasting, positive impact on our economies.

I want to thank Alternate Minister Vitsas, Simos, Athanasios, and the organizers of this AUSA conference for inviting me to speak, and I want to wish, καλή αρχή, or a fantastic beginning, to the newly launched first chapter of AUSA in Greece.