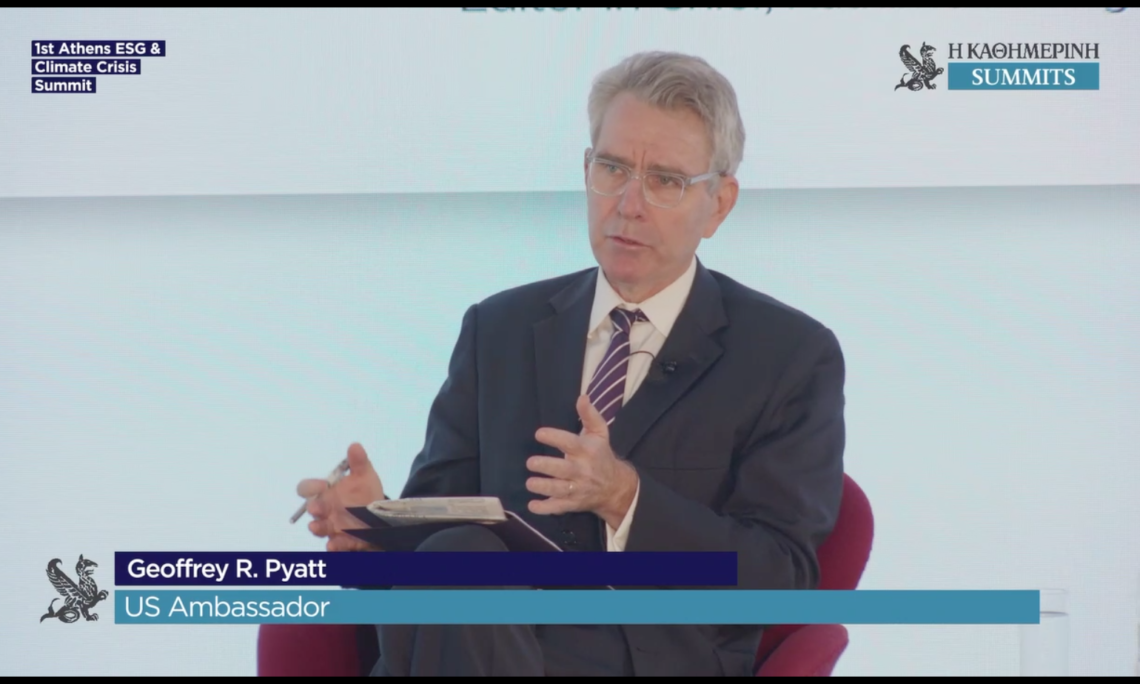 Mr. Ellis:  Let me start with the U.S. Ambassador, Geoff Pyatt.  Welcome to the Kathimerini ESG Summit.  And let me ask you an easy question because it’s something that everybody thought and still thinks.  From Trump to Biden.  We’re going from somebody who was denying, almost denying, the crisis to somebody who seems to be really into it.  So I don’t want to put words in your mouth.  What’s the difference in the U.S. policy from the one administration to the other?

Ambassador Pyatt:  This has been one of the most important changes in the transition from the Trump administration to President Biden.  In his first days in office, the United States came back into the Paris Climate Accord.  But much more importantly, climate has been put right at the core of everything that the Biden administration is doing in terms of economic recovery from the pandemic, in terms of accelerating investments in the kind of technological innovation that is going to help us to meet the climate crisis, and also the debate that’s going on right now today in the U.S. Congress about substantial new investments in infrastructure and in climate transition.

The great thing about this for me as American Ambassador is this shift in U.S. policy has also complemented the priorities of Prime Minister Mitsotakis.  There is great admiration in the United States for the level of ambition that Prime Minister Mitsotakis has demonstrated with his commitment to a lignite phaseout by 2025, but also natural synergy with U.S. investments, U.S. technological innovation.  And we can talk about that later.

Mr. Ellis:  You come from California, not only the U.S. in general, so you do have wildfires as we, unfortunately, over the last few years.  So I’m wondering, what’s the experience in the U.S.?  How are you dealing with it?  And if there is any cooperation on dealing with let’s call it a common threat?

Ambassador Pyatt:  It’s spooky to me to see how much similarity there is, and it’s not just the impact of the climate crisis in terms of wildfires.  Coastal erosion.  Sea temperature change and the impact on fisheries.  California, like Greece, is a maritime domain, and so we have an extraordinary stake in this climate crisis and what we do about it.

California, if it was a country it would be, I think, the fifth or sixth largest economy in the world.  It has also been a driver of technological innovation in the climate and energy area, the home, of course, of Silicon Valley and all the innovation that’s happening there in terms of smart grids.  We’ve seen a massive scaling up in California in terms of renewables, a very strong commitment from the state government to innovation in renewables, in vehicle admissions.  We’re the home of Tesla.  There’s just a low of synergy there.

I’m also very glad that we have already established connections directly between the state of California and the Hellenic Fire Service including with CalFire which just like Greece we have Canadairs, and we face exactly the same issues because the terrain is so similar.  But we’re going to continue to deepen these ties.  I’m very grateful for the support that I’ve enjoyed from California’s lieutenant governor, Eleni Kounalakis, who has also been a champion of these issues.

And what we all lived through last August here in Greece, watching the tragedies on Evia and on the outskirts of Athens, that was exactly the same time as California was facing literally the largest fire that we have ever had in the state.  So this is a natural area of complementarity between us.

Mr. Ellis:  Let me ask a broad question since as I mentioned before you and your colleague represent big economies.  How seriously does the U.S. industry take the climate crisis issue?  How are they coping with it?  I know you’re a member of the government, but give us a sense of how the private sector, not the government, how American companies, are they moving into seriously doing things about it?

Ambassador Pyatt:  Absolutely, because they recognize that it is a key competitive issue, it’s important to their shareholders, and it’s important to the sustainability of their industries.  Certainly in the United States it’s clearly understood that meeting the climate crisis is going to require innovation, leadership, capital and investment from the private sector.  This is not a problem that government alone can solve.  And in that regard I am committed to ensuring both that we are highlighting the opportunities that Greece represents in this area, but also that the best of American technology and capital is being brought to bear on the efforts that Greece is making also to meet the climate challenge.

Mr. Ellis:  Let me move to something which is part of the issue, energy and the energy crisis.  We see what’s happening.  I’m wondering if we’re moving too fast?  Or how should we deal with it?  Because we need still, we haven’t moved to the next generation of energy resources.  We’re moving towards that goal.  So how do we deal with what’s happening right now on a practical level?  In the U.S. and the world.

Ambassador Pyatt:  I think the first point to emphasize is that this global energy price shock that we’re watching is in no way a consequence of energy transition.  First and foremost, it’s a consequence of the pandemic and the rapid reawakening of the global economy as vaccines are rolled out and we come out of lockdown.

And it’s also a reflection of the importance of in fact moving faster on energy transition.

Here in Europe in particular there’s also an energy security angle to all of this, and it’s notable as governments in Europe are starting to worry about whether they’re going to be able to keep the heat on this winter that Greece does not have to worry about that, in large part because of the smart investments that Greece has made over a number of years in expanding the Revithoussa terminal, building out the TAP pipeline, expanding the agenda of energy security in a way that benefits Greek consumers but in fact is also transforming the energy map of Europe and building energy security for all of the Western Balkans.

Mr. Ellis:  So since you mentioned it indirectly let me ask, do you feel Russia is playing the right role right now with respect to energy in Europe?

Ambassador Pyatt:  I look forward to hearing from my German counterpart on this issue.  I will just say that it is extraordinarily cynical for Russia to suggest that it will deliver gas in exchange for accelerated regulatory approval of the Nord Stream 2 pipeline.  It is a classic example of how Russia has used energy for political purposes, something I lived through very dramatically during three years as Ambassador in Ukraine.  And it also revalidates, as I said, the investment that Greece has been making to lead the way on energy security in southeastern Europe.  Building opportunities for non-Russian sources of energy through the TAP pipeline, through the IGB, through the new FSRU in Alexandroupoli, through the expansion of the Revithoussa terminal.  That’s how to meet this challenge, by diversification of energy sources and routes and continued progress towards energy transition.

Mr. Ellis:  And are American companies involved this diversification?  I mean it’s one thing to say it as a political statement.  It’s another thing to have U.S. companies be part, not necessarily by themselves but even in joint ventures, being part of this effort to diversify.

Ambassador Pyatt:  First of all, I would highlight how much positive attention Greece has gotten from American investors because of Prime Minister Mitsotakis’s leadership, including his leadership on climate, his very clear declarations about his intention to prioritize climate as part of Greece’s ERF expenditures.  That has gotten a lot of attention.

I had the opportunity when I was in Washington last week to speak with Secretary Kerry who continues to have Greece front and center on his radar scope precisely because it’s such a great example of raising ambition.  But we’re also working very hard and talked at the Strategic Dialogue about how this creates opportunities for American investment.

We have an American company out of Texas, 547 Energy which is poised to become the largest wind power operator in Greece through a large project up in Macedonia.  It’s already operating and present in the Peloponnese.

There’s another American company, the largest privately owned, privately held energy and power technology company in the United States, Invenergy, headquartered in Chicago.  It’s talking to a number of partners here in Greece about opportunities.

GE, of course, has been very active.  It is currently under contract for two combined cycle gas power plants, one with Mytilineos at Agios Nikolaos; the other with Copelouzos in Alexandroupoli.  Those will be some of the largest and most efficient gas-fired power facilities anywhere in Europe and they are critically important to addressing the issue that the previous panel talked about which is what comes in behind all of the coal-based power that Greece is beginning to phase out.

So American investment has returned.  American companies have returned to this sector, and I’m confident they’re going to continue to play a leading role, partnering with big Greek groups as illustrated by the examples of Mytilineos and Copelouzos that I just talked about.

Mr. Ellis:  You covered as a promoter of U.S. companies all the fields and that’s what —

Ambassador Pyatt:  I could do a couple more.  There’s Blink Charging with its electric vehicle chargers working with PPC.  It’s all over Greece.  I can go on.

I want to mention Advent Energy because it’s such a fantastic example.  Advent is a Boston headquartered company which has its research and development facilities in Patras.

I really feel lucky because I saw Advent when it was a scrappy startup.  They have since had their NASDAQ IPO.  When I went back to Advent in Patras after their IPO everybody had new uniforms, there was new lab equipment, there was a lot of money going around.  They’ve also begun acquisitions in Silicon Valley.  They’re talking to the government and talking to Minister Georgiadis about a further investment here in Athens because they have found that they can do brain gain more efficiently from Athens, that is attracting Greek engineers and others who’ve been in the United States or elsewhere in Europe to come back.

Ambassador Pyatt:  We have a hot hand on this issue, in Las Vegas terms.

Mr. Ellis:  In closing, as we move towards the Glasgow Summit, what is the U.S. role, or should its role be in this whole global effort as we move to the summit?

Ambassador Pyatt:  When I saw John Kerry last week, Tom, you know him, you will appreciate, he was moving 100 miles an hour.  He has traveled more than anybody else in the State Department since January, and he’s doing so with a single message.  We have to raise our ambition.  We all have to work harder if we’re going to meet the climate challenges that the world confronts.

Minister Skrekas has been a key part of that conversation here.  I was very glad he was able to meet with Energy Secretary Granholm in Warsaw a couple of weeks ago, again to highlight how we work together.  And I can tell you that what Secretary Granholm was most excited about when she sat down with Minister Skrekas was the Prime Minister’s game-changing ambition which is exactly what we are looking for from our other European allies and partners.

Mr. Ellis:  Thank you very much.