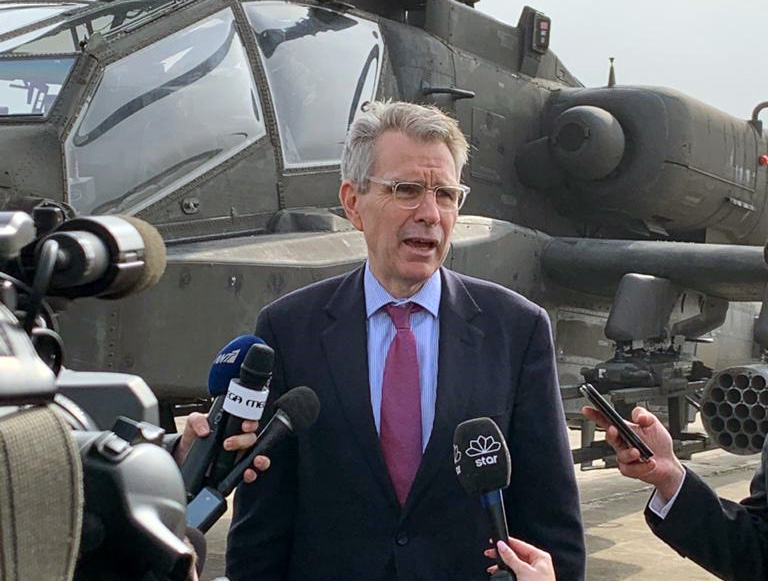 So I want to start by thanking all of our allies from the Hellenic Armed Forces for hosting us here today. In particular, General Lalousis, who I also want to congratulate warmly for your new promotion to assume command of the Hellenic Army. We are incredibly grateful for our partnership with the Hellenic Armed Forces, General, and speaking personally, it’s a terrific pleasure to be here today at Stefanovikio. I also want to say thank you to General Iliopoulos, to General Koutras, and to all the men and women of the 1st Hellenic Army Aviation Brigade. This is a fantastic opportunity to highlight the way in which we are continuing to build and deepen the strategic relationship between Greece and the United States.

I also want to say a special thank you to Lieutenant Colonel Causey, to Colonel McFadden, and all the soldiers and aviators of the 3-17th. Thank you for your service, but also thank you for being such terrific representatives of the United States of America here in central Greece. I had the opportunity a couple of weeks ago to meet with a delegation of members of the Hellenic Parliament from Volos. They were all incredibly proud of the presence of the 3-17th here, and the signal of confidence, but also stability, that the U.S. Army in central Greece is providing. I know—and I appreciated the briefing—I know you have gotten a good taste of the “filoxenia” that is such a distinguishing characteristic of Greek culture and Greek hospitality. I was also glad to see—it wasn’t mentioned in the slide—I know a couple of your unit actually completed the classic marathon last October, so congratulations on that as well.

As the briefing described, what the 3-17th has been able to accomplish in Greece is really unique, and it has helped to both build interoperability between our forces, but also to enhance the readiness of the U.S. Army in Europe. Our work together this year takes on special significance in light of the signature last October by Foreign Minister Dendias and Secretary of State Pompeo of the amendments to our Mutual Defense Cooperation Agreement, which was ratified by the Hellenic Parliament at the end of last month. Stefanovikio, which is specifically designated in this enhanced MDCA, is now formally a place where the United States can expand the scope of what we do, and I expect next year, we will see an even more robust and impressive U.S. presence here. And so I want to thank, of course, Minister Panagiotopoulos, Deputy Minister Stefanis, and General Floros for all the work they have done to upgrade our relationship and also to secure Parliamentary support for the enhanced MDCA. The 3-17, with its Apache and Blackhawk helicopters, has been in Greece as part of a rotational force to Europe to conduct training in order to build readiness, increase interoperability, and enhance the bond between our allied nations.

Greece, as we’ve heard in the briefing, provides a really exceptional and unique training environment. Whether it’s the dramatic and varied landscapes—and we’ll see that later today at the range—or the incredible weather, which allows our pilots to train through the winter—which is not quite the same elsewhere in central Europe, especially—or the welcome that the citizens of Greece have provided, I cannot imagine a better place in Europe for our aviators to train with our NATO Allies.

This exercise and the two other exercises the 3-17 participated in, with the Hellenic Army and the entirety of the 3-17’s rotation, demonstrates the American commitment to our Alliance with Greece and provides substantial proof of what Secretary of State Pompeo said in his letter to Prime Minister Mitsotakis, that the United States is committed to Greece’s security, prosperity, and democracy. This event is the culmination of the 3-17’s training rotation in Greece, and the unit will move on to Poland for further NATO training in the weeks ahead.

But I also want to point to the other incredibly positive experience that our troops have had. Through their work together with their Greek partners, our forces have gained a better appreciation of Greece’s ability to leverage its unique attributes to develop capacity and build the strength of our NATO Alliance.

The United States sees Greece as a pillar of stability in the region and further expanding our joint training opportunities advances shared defense and security goals as reflected in the enhanced MDCA, the clear messages that were conveyed by Secretary of State Pompeo, Vice President Pence, and President Trump when Prime Minister Mitsotakis was in Washington last month, and the goals that we have set through the Strategic Dialogue to further deepen our strategic defense relationship in furtherance of shared prosperity and peace.

So as we look forward next year to welcoming the 101st Combat Aviation Brigade for the next rotation in support of Atlantic Resolve, I know that we will be seeing opportunities to further deepen these ties between our allied nations, but also to develop the capacity of American forces, which enables the U.S. Army in Europe to better uphold our commitment as NATO Allies to the collective security of our EuroAtlantic community.

So thank you very much, thank you again, General, congratulations, I know I speak on behalf of General Cavoli and the rest of the U.S. Army leadership as well in saying how pleased we are to have you as a partner, and I’m delighted, having spent more than two-and-a-half years now talking about Stefanovikio, talking about these deployments, meeting with our forces in Germany during rotations through Thessaloniki, I’m delighted I finally get a chance to see the range in action. So thank you very much for sharing it with me today.

Journalist: May I ask you a question?
Ambassador: No, we’ll do questions I think out at the range.

So I’m just going to quickly repeat some of the key points I made at the earlier press interaction inside. First of all, is to offer my tremendous thanks to General Lalousis and all the other representatives of the Hellenic Armed Forces who are here with us today and who have facilitated this deployment.

This rotation, which has been running for about five months now, is especially significant in light of the signature in October of the amended U.S.-Greece MDCA, Military Cooperation Agreement, which explicitly identified Stefanovikio as one of four key facilities for U.S.-Greece cooperation. The amendment to the MDCA, among other things, allows us now to invest U.S. resources in terms of upgrading capacity, deepening the ability of these facilities to support American rotational forces.

I want to say how impressed I was also to hear from Lieutenant Colonel Causey and the soldiers of the 3-17th, to hear from them the quality of the hospitality, the “filoxenia,” which they have enjoyed from our Greek hosts, but also the quality of the opportunities that this unique facility provides: the ability to exercise in a variety of terrains, over high mountains with Mount Olympus over the sea, the ability to work with pilots from the Hellenic Armed Forces, who operate almost identical aircraft, building interoperability. That is the essence of our NATO Alliance: a shared commitment to our collective security, and a commitment to working together to meet shared challenges and to ensure the safety and security of our EuroAtlantic community.

I’m looking forward very much to getting out to the range this afternoon, seeing the exercise. I was talking with General Koutras about all the work that we have done in Athens over the past two-and-a-half years to create the enabling environment for this cooperation.

As President Trump, Vice President Pence, Secretary Pompeo pointed out when the Prime Minister was in Washington last month, the U.S.-Greece relationship is stronger than it has ever been, our defense ties and our defense cooperation is an essential component of that, and what you are seeing today is an illustration of how our two countries, working together with support from the Prime Minister, from Defense Minister Panagiotopoulos, from General Floros, are working together to enhance interoperability and to build the capacity of all of our forces.

So thank you very much for making the trip today. I look forward to seeing you out on the range, and I thank whoever arranged for the blue sky and the sunshine to come out. Ευχαριστώ πολύ.