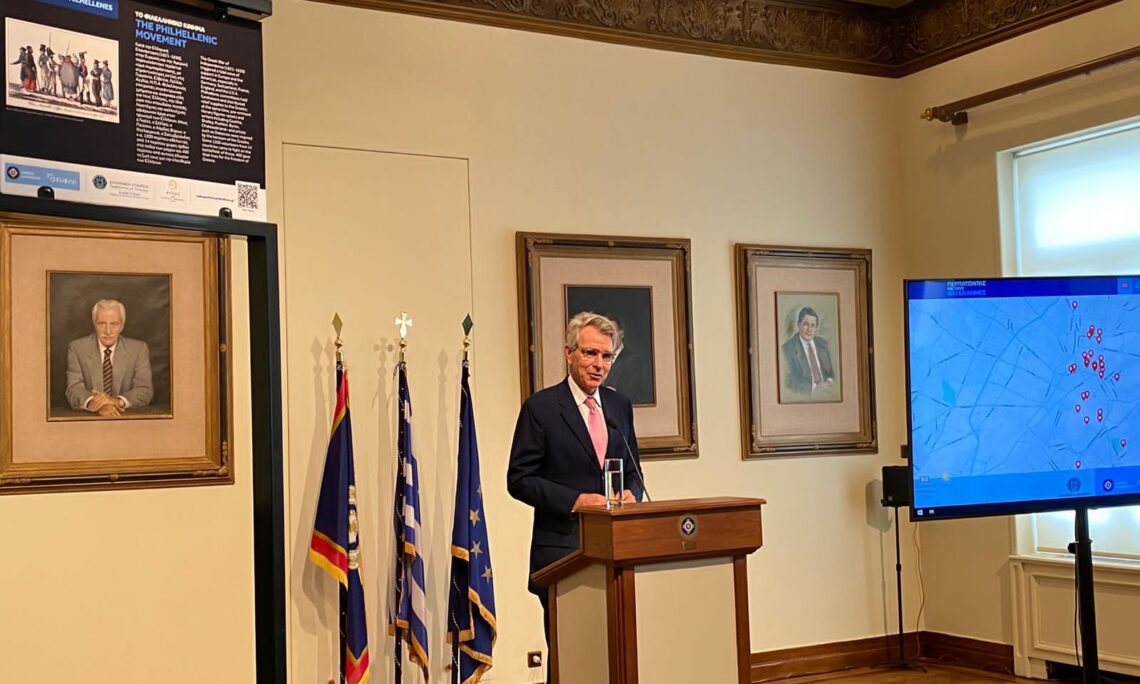 Kalispera.  Mayor Bakoyannis, thank you for hosting us this afternoon at the beautiful City Hall of Athens, and for taking the lead to recognize the Philhellenes who fought shoulder to shoulder with Greek men and women to defend the shared democratic values that were first brought to life here in Athens 2,500 years ago.

And also Mr. Stamatopoulos, Costas, let me say thank you to you and the Hellenic Society for Culture and Environment, for your leadership in this project.

I particularly want to thank my dear friends Costas and Lydia Caras for everything that they have done over so many years to protect Greece’s precious environment and cultural heritage.  And I will say, it was about a half year ago July that Lydia tracked me down on a visit to Hydra and told me about this project and the request she had made for the support of the U.S. Embassy.  And I knew at that moment that resistance was futile.  I’m very proud that we’ve been able to collaborate in this way.

I’m especially honored also to be joined by my counterparts from the UK, Germany and Italy, three of the United States’ most important allies in our transatlantic community.  And I’m excited to have this opportunity with my colleagues to share the stories of how the citizens of all our countries came together more than 200 years ago to stand side by side with the Greeks.

I am also very thankful that we have Professor Efthimiou here with us today.  I would note that her work has contributed greatly to our understanding of this crucial period in Greek history.  I’m very much looking forward to her presentation.

The U.S. Embassy is exceptionally proud to support the “Walking with the Philhellenes” initiative.  We did so as part of our campaign, “USA and Greece: Celebrating 200 Years of Friendship,” which was designed to honor the Greek bicentennial and also to commemorate the two hundred years of strong friendship between our two nations.

“Walking with the Philhellenes” celebrates four Americans — Daniel Webster, Samuel Gridley Howe, Edward Everett, and John Henry Hill — who courageously devoted themselves to the cause of Greek independence.

These American Philhellenes showed their dedication in different ways.  Some left their homes in the United States to fight here in Greece, literally putting their lives on the line.  Others became vocal supporters of the Greek revolution back home in America, raising money and in-kind support in what became one of the first real foreign policy debates in our young country.  And others came to Greece to help the new state develop its educational and cultural institutions.  They all believed deeply that they had a civic duty to help Greece win and consolidate its independence.

In the past year, as part of many events that the Embassy supported to commemorate the Greek bicentennial, I was proud to take part in this effort to ensure that the legacy of the American Philhellenes lives on.

Last summer, I joined Mayor Koukoudakis in Hydra for a street naming ceremony in honor of William Washington and George Jarvis who fought on that island.  I’m very grateful to the Mayor of Hydra for his gracious efforts to commemorate the legacy of these Philhellenes who came to Greece because they felt so passionately about supporting the revolution and all that it represented.

Through events like those, and this one today, we acknowledge the fantastic work of these individual American citizens.  But we also remember the many other American Philhellenes who supported Greece.  They were men like the four honored today and women like Julia Howe, who lived here with her husband Dr. Samuel Gridley Howe.  Back in the United States, she and many other American women led the fundraising efforts in their communities to provide humanitarian supplies to those fighting on the frontlines.

The contributions of the American Philhellenes to the Greek cause are not just part of the United States’ historic friendship with this country.  They also exemplify the democratic values that unite us today.

Our democracies were founded on the shared ideals of human liberty, self-government and rule of law.  Our commitment to defend and uphold these values is even more important today as our relationship grows stronger — and as our countries, together, face even greater challenges.

Last year’s bicentennial was a fantastic opportunity not only to celebrate our past, but also to look ahead to the future and to create new opportunities.

Today, the relationship between the United States and Greece is at a historic peak, and we will continue to stand by Greece as our trusted ally and partner.  As President Biden has personally pledged, we will continue tirelessly to foster new areas of strategic cooperation.

We are committed to advancing the goals enshrined in the U.S.-Greece Strategic Dialogue, working together to strengthen our people-to-people ties, developing further our educational partnerships.

Together, we’re deepening our defense and security relationship, while building up the economic and investment cooperation that is vital not just to the future of Greece, but to peace and prosperity of this entire region.

The stories of Daniel Webster, Samuel Gridley Howe, Edward Everett, and John Henry Hill are inspiring examples for all of us.  They are examples of sacrifice and respect for those who chose to lead their lives driven by the shared ideals of our democracies.

Mayor Bakoyannis, I am very grateful to you and the Society for Culture and Environment for this wonderful initiative to highlight the stories of these important Philhellenes.  In doing so, you honor us all, and you contribute one more story to this marvelous historic city that Mary and I have been so privileged to call home for the past five and a half years.