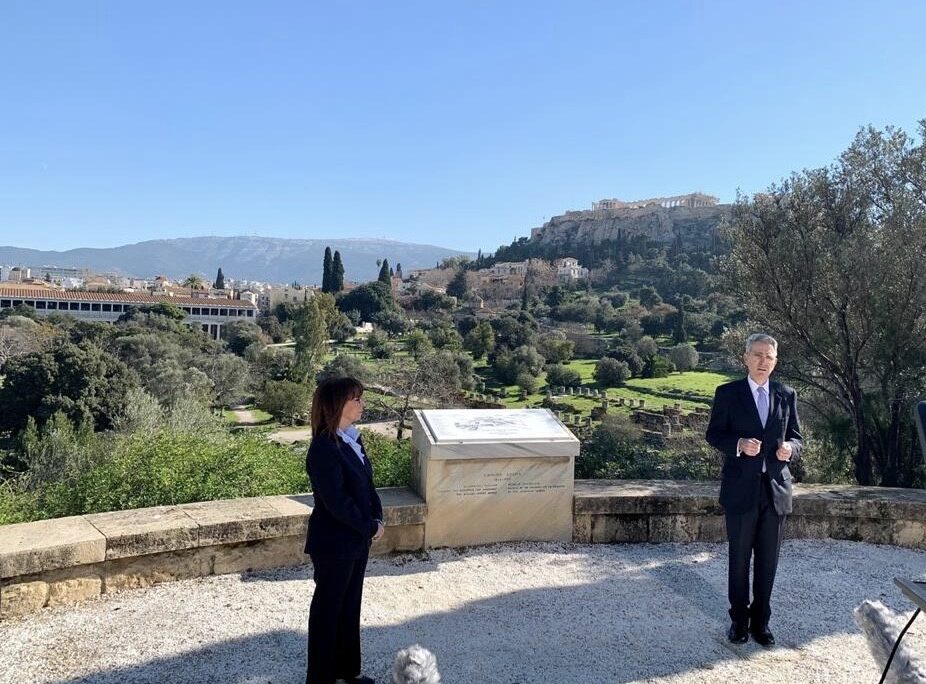 Καλησπέρα σας.  President Sakellaropoulou, thank you for doing us the great honor of joining me here today as we commemorate the inauguration of President-elect Joe Biden and Vice President-elect Kamala Harris at the birthplace of democracy, the Athenian Agora.

It’s a great pleasure to acknowledge this important moment in American history at such a meaningful and beautiful spot, beside the Temple of Hephaestus with the Athenian Agora and the Acropolis behind us.

The Agora was the center of public life in ancient Athens, a gathering place accessible to all where new ideas were discussed and resolved.  On this very spot, twenty-five centuries ago, ancient Athenians began debating a new system of government that favored the many over the few, one based on freedom, equal opportunity, and equal justice before the law.

Under this new social contract, the people of Athens became citizens instead of servants.  As stewards of their society, they charged themselves with protecting and upholding their new rights and liberties through active and informed participation in government.

They called this new form of government demokratia because kratos, the power or right to rule, flowed from demos, the people.

Since the time of Pericles and the Persian Wars, Athenian democracy has been a source of pride for Greeks and all who have enjoyed the rights and responsibilities of self-governance.

A passionate belief in this democracy, which the world recognizes as one of Greece’s great gifts to humanity, forms the bedrock of our bilateral relationship.

It is a set of core values that we champion at home and around the world, and the foundation for a 200-year friendship that the United States and Greece are celebrating together this year.

Our countries’ struggles for independence two centuries ago were intimately linked.  Classical Greek philosophy and democratic ideals inspired America’s founders as they drafted our Declaration of Independence and Constitution, documents that guarantee a U.S. government of, by, and for the people, based on individual freedoms and rule of law.

The Greek Revolution sparked one of the first foreign policy debates in the early days of our nation, as American politicians advocated in support of the Greek Revolution, believing this was the best way to fulfill the promise of our own democracy.

And thus, we saw the emergence of American Philhellenes like Samuel Gridley Howe, George Jarvis, and William Washington, and the friendship between our first Secretary of State and third President, Thomas Jefferson, and Adamantios Korais.

Two hundred years later, I’m proud to say that the friendship between the United States and Greece is stronger than ever.

The path leading to this moment has not been without challenges.  Our democracies have faced assaults on many fronts, including civil war and two world wars.

And, I know the storming of the U.S. Capitol on January 6 as Congress gathered to certify the results of our presidential election shocked many Greeks.  It was an intolerable attack on all that America represents and all we hold dear.

But even as we mourn the desecration of our Capitol and those who died protecting it, we are confident that those responsible will be brought to justice.

Make no mistake: our democracy is resilient and deeply rooted in virtues and beliefs that will prevail against such challenges, as it has done in the past.

But there is also a greater story to tell about the U.S. election and the inauguration that brings us here today.

In November, the United States experienced the most widely contested election in our history, with more people exercising their right to vote than ever before.

In the midst of a global pandemic, local authorities from both parties systematically performed their duties with integrity and professionalism so the votes could be counted and the results certified.

Our national security agencies redoubled their efforts to prevent foreign interference in our election process. Our judicial system upheld the rule of law.

And on the evening of January 6, our lawmakers returned to the Capitol to affirm President-elect Biden’s victory as provided for in our Constitution, showing the world the strength of our institutions and our commitment to democratic principles.

Later today, the will of the American people will be fulfilled when a new President and Vice President of the United States of America are sworn in.

I want to thank you again, Madame President, for your message of solidarity and confidence in American democracy.

The tremendous outpouring of support we have received during the past few weeks from the Greek people is a reminder that we must never abandon our vigilance nor the time-cherished ideals that make us who we are.

These values – which first took root on the very ground we’re standing upon today –have made theUnited States a beacon of light, hope, and democracy to the world, and these values will carry us forward.

Inspired by ancient Greece’s greatest thinkers and the experience of Athenian democracy, our nation’s founders drafted a Constitution seeking to create a “more perfect union.”  They understood that every democracy is a work in progress, that the American experiment would follow a winding path, and that our citizens would be tested.

But they also knew that together, as citizens committed to democratic traditions, supported by likeminded nations around the world, our union would persevere, bending ever closer to the ideals of liberty, equality, and justice for all.

Over 31 years as an American diplomat, I have seen the inspiration that our democracy provides to other countries, so it is inspiring to watch the United States further perfect its democracy by electing Kamala Harris as Vice President, the highest-ranking female elected official in U.S. history and the first African American and Asian American to hold that office.

I know that President-elect Biden, Vice President-Elect Harris, Secretary of State-designate Blinken, and the rest of the Biden administration will be strongly committed to our alliance with Greece, advancing the goals of our Strategic Dialogue, collaborating in the global fight against COVID-19, and taking our bilateral relationship to even greater heights.

President-elect Biden is a friend of Greece who knows this country and its people well.  The President-elect’s national security team has broad experience in this region and is deeply committed to our transatlantic relationship.

As Secretary of State-designate Blinken underlined in his confirmation hearing yesterday, our new administration will “engage the world not as it was, but as it is.  A world of rising nationalism, receding democracy, growing rivalry with China, Russia, and other authoritarian states, mounting threats to a stable and open international system, and a technological revolution that is reshaping every aspect of our lives, especially in cyberspace.”  In Greece, we will meet these challenges as friends and allies, working more closely together than ever before.

The United States also intends to play an important role in helping to commemorate Greece’s bicentennial.  The U.S. Embassy is excited to celebrate our 200-year friendship with Greece, honoring its people, highlighting its history and achievements, and envisioning our future partnership in the Eastern Mediterranean and Western Balkans.

We are commemorating this important year with a campaign based on the Greek concept of philia, which honors the common values and people-to-people ties that continue to inspire the friendship between our countries.

Throughout 2021, we will partner with Greek civil society, cultural and educational institutions, cities, and individual citizens on a series of programs and events to show America’s respect for ancient Athenian democracy, highlight the role of American Philhellenes in Greece’s fight for independence, and underscore the commitment to our strategic partnership.

With today’s historic inauguration and the peaceful transfer of power it entails, we turn a new page in the United States, and we look forward to Greece’s bicentennial and the upcoming year as an opportunity to reaffirm our shared democratic values and converging strategic interests.

The 200-year friendship that has united our countries will light the way ahead, just as the light of democracy has shone from these hallowed grounds for centuries reminding all that in our system of self-government, power and progress comes from the demos, from “We, the people.”