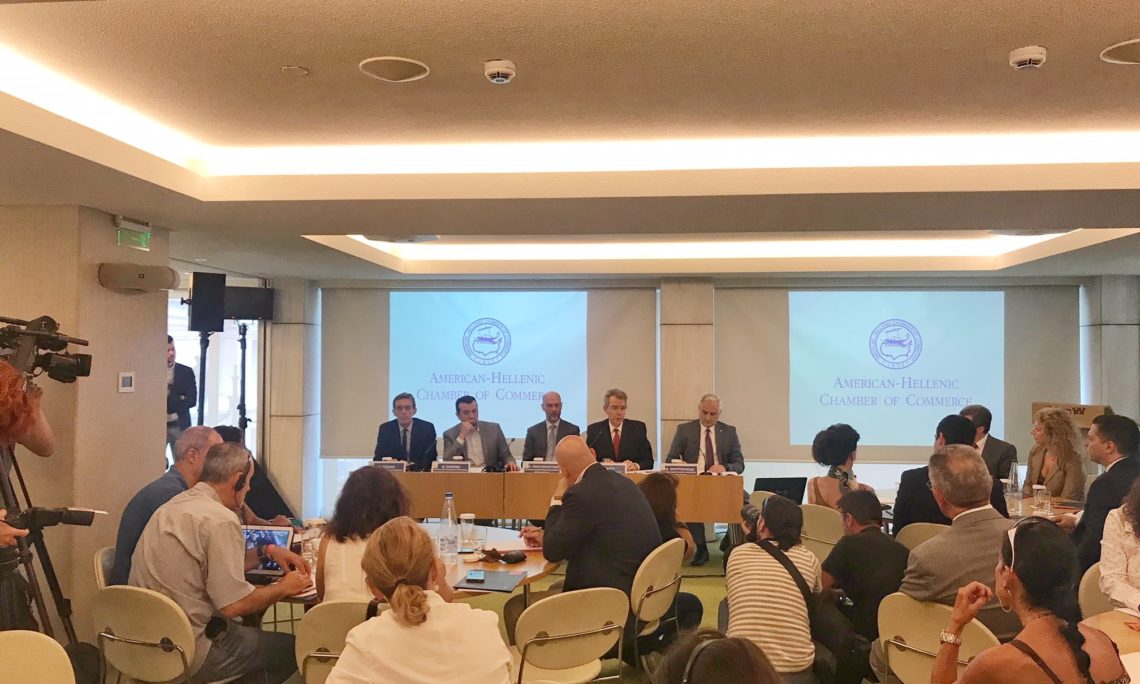 Thank you, Simos. Well, first of all, let me say a thank you, Minister, for the very strong support that the entire Greek government has offered to this fantastic opportunity that we will have as the honored country at the Thessaloniki International Fair. I also want to say a special thank you to Simos, to Elias, to all of our partners at the Hellenic American Chamber of Commerce who have done heroic work in putting together a very, very impressive American pavilion, close to a hundred top-tier American companies, and Elias will talk more about who they are, representing trillions of dollars of capital and the very best of American technology and innovation.

I want to use my time, first of all, to emphasize the strategic context for our participation as the honored country. And you really have to go back to October, and Prime Minister Tsipras’ trip to the White House, and the emphasis there that President Trump, Secretary Mnuchin, Secretary Ross, and the rest of the administration put on American support for Greek economic recovery. Our participation in Thessaloniki happens in the framework of that support, it is intended to be a vehicle, to put a positive spotlight on the very best of American technology, American investment, but also to help get the word out in the United States about the significance of Greece’s return to economic growth, about the importance of the watershed that Greece will cross in August with the end of the third bailout, and about the tremendous opportunities that we see here, in terms of Greek human resources, Greek natural resources, and, as the Minister said, the critically important role of Thessaloniki, and of Northern Greece, as a gateway to the wider region of the Western Balkans and a market of 30 million people.

The Thessaloniki Fair will be the U.S. government’s signature effort in Greece in for the year of 2018, and it has enjoyed whole-of-government U.S. support. There was tremendous interest and excitement about this opportunity when I was in Washington last month. I expect we will have participation not just from a broad range of American companies, but a senior-level political delegation as President Trump promised. Also, interest from the U.S. Congress, and an attention from our side to highlight not just the commercial aspects of our relationship, but the depth and breadth of our relationship.

I am especially excited in that context that working with a number of private sector partners, we have some important cultural events that will take place around TIF. So we will have for instance a project called American Art Everywhere, and I think we have some examples of what that’s going to look like which will be shown later, but this will put iconic American artwork all across Thessaloniki, on buses, on buildings, on billboards, with support of Governor Tzitzikostas and the local government but also with U.S. government support and support from our private partners.
Most of you know how much energy I have put into the Embassy’s support for the Greek startup sector, which is, I think, one of the most promising areas for investment and a real success story for Greece, so we will be highlighting the startup sector as part of the American pavilion. We will be working with our partners here from TEDx Athens to have a series of TED talks and other programs intended to help create a supportive environment for Greek entrepreneurship and especially the kinds of young entrepreneurs that I’ve met in Thessaloniki, in Patras, in Ioannina, all around Greece who are producing world-class products, leveraging the resources of this country, so we want to put a positive spotlight on innovation and the TEDx effort will be part of that as well.

Finally, I want to emphasize that for the Embassy, this is not just a one-week effort. Our focus on TIF this year is part of a much broader effort to address perceptions of U.S. disengagement in Northern Greece. We want to emphasize our commitment to working with civil society, with companies, with political leaders in Northern Greece to maintain the United States as a major partner for that region, just as we do here in Athens. We’re very proud of our Consul General there, but we also recognize that it’s not just a one-week engagement where we’re going to have a lot of American companies there, but we intend to remain engaged, continue working with our partners in the regional government, our partners in the Mayor’s office, with local universities, to maintain this broad engagement that I talked about on the full spectrum of issues where the United States and Greece work together.

I’m very excited about this. When we started this a year ago, it was very abstract and I will confess I wasn’t sure we were going to be able to do it, but there’s been a lot of effort and what I am most proud of is the quality of the partnership, first with the Hellenic American Chamber and all of the American companies in Greece, but also the very strong support we’ve received from the Greek government and also from the local governments, in the region and also from the Mayor’s office.

So thank you to all.