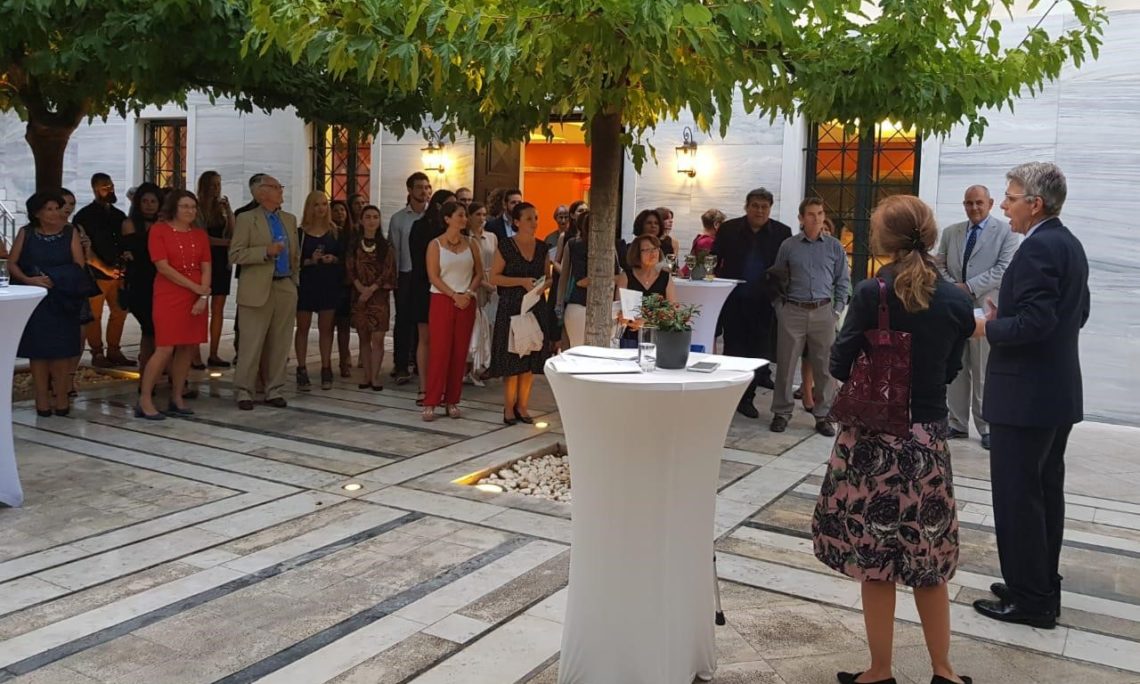 First of all, thank you Artemis for being here and thanks for what you do.

This is one of my favorite events of the year as all of the Fulbright scholars embark on what I think of as a wonderful adventure, which will change your lives more than you probably know.

I also want to acknowledge our hosts tonight, Dr. Neils, Maria, my favorite librarian. If you have not discovered the Gennadius library yet, do it — this beautiful campus, what a wonderful part of the American cultural presence in Greece. Also, Deputy Minister Digalakis, I should say on the government side, we are very excited that Minister Kerameus is in New York right now. We’ve been exchanging SMS messages over the course of the day. She’s having a terrific program, with Columbia, with the Institute for International Education and also with our Assistant Secretary of State for Educational and Cultural Affairs who will be here in two weeks with Secretary of State Pompeo.

The U.S.-Greece relationship is moving very fast right now. I think you’ll get some flavor of that over the course of the next weeks and months. There is a very high level of excitement about the opportunities that are opening up with Prime Minister Mitsotakis’ new government and the very clear messages that he is sending on a broad range of issues of importance to the United States. But one of the things that for me is most exciting about the new government is the fact that Greece now has a Prime Minister who was educated in the United States, a Harvard and a Stanford graduate, two schools I didn’t get into, but who also has built a team that is probably the most Americanized in the history of Greece in terms of the number of Ministers and Deputy Ministers who have studied in the United States, have children studying in the United States, have worked in the United States and understand what an incredibly powerful tool our educational system is. So he has clearly prioritized the educational bonds between our two countries.

I was talking this evening with a long-time friend from the University of Virginia about our hopes that UVA will grow its programs here. We have a new NYU program; there’s a long-standing Harvard program; Alexis from College Year Abroad – he just left – is the sort of flagship of exchanges. But Fulbright also occupies a special place as a program of the United States government, a program in Greece which is the oldest in Europe and the second oldest in the world and has a fantastically distinguished roster of alumnae and alumni around the country.

So we’re very proud of what Artemis does, we’re very proud of what you all represent. I would encourage you to think of yourselves as Ambassadors for the United States, for what we represent, for our values, for our tolerance, for our traditions, but also take advantage of this fantastic opportunity that you have. This is a magical country with an incredibly rich culture, a fantastically welcoming society, and literally millennia of history. So drink it in, challenge yourselves, go new places, and as I said, I think you will find Greece is going to change you, whatever your area of profession is, whether you are a scientist or a classicist or a historian or a failed political scientist like me, you will find that your experience in Greece will change you.

So congratulations, good luck, and we look forward to seeing what you will accomplish in the months ahead. Again, thank you, Artemis, for what you and the team do.