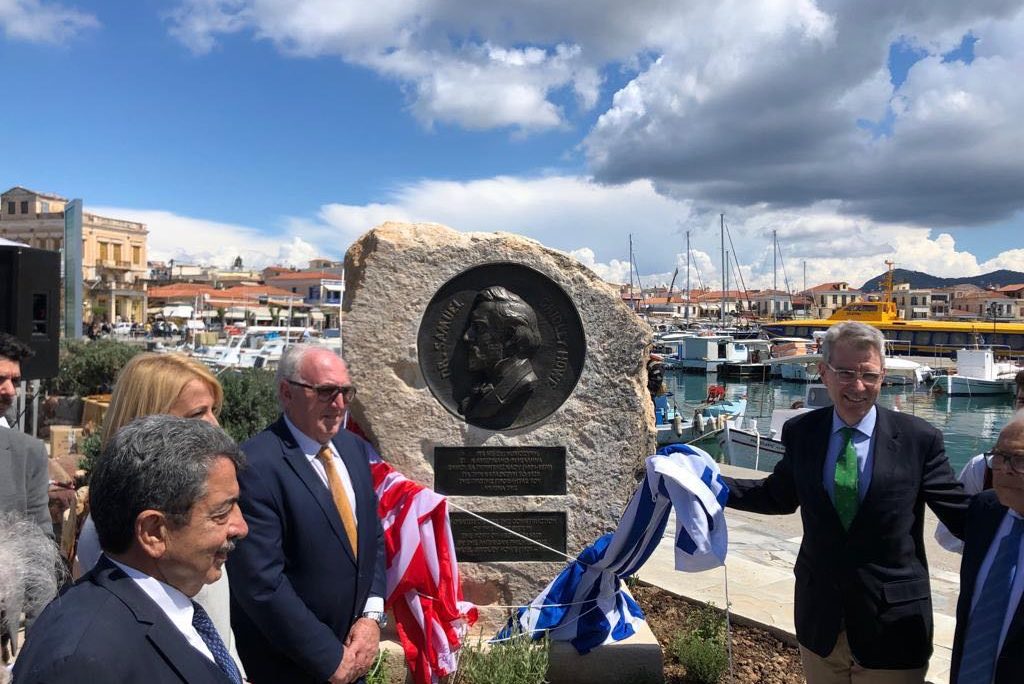 Καλημέρα σας. Mayor Mourtzis, Dr. Sotirakopoulos, thank you so much for inviting me to speak today in honor of Dr. Howe. I also want to acknowledge in particular the presence today of our friend, Attica Governor Rena Dourou, the Vice Governor Mr. Hatziperos, and the many other political leaders who have come out today.

I have particularly fond memories of the island of Aegina. This was the first Greek island I visited as Ambassador a few days after my arrival here in 2016. I’ve been back many times and I have particular memories of a wonderful August day spent visiting the beautiful studio of my friend and Fulbright alumni Costas Varotsos, when I visited the temple of Afaia, the third corner of the Sacred Triangle composed of the Acropolis and my favorite classical Greek monument, the temple of Poseidon at Sounion.

When I left Piraeus this morning, it was rainy, and the weather was unsettled, and as soon as we left the harbor, two dolphins crossed bow of our ferry, so I knew it was going to be a good day, and I’m grateful for this beautiful weather.

When I was on this island before, of course, I’ve also eaten my weight in your world-famous pistachios, which is yet another reminder of my home state of California, and Dr. Sotirakopoulos, I assure you, I can well appreciate the amazing smell that this island possesses and also its magical light which is so distinctive of the Saronic Gulf.

I was in Thessaloniki on Friday, where it was not so warm and beautiful, with our Gilman Scholars at the first-ever Career Summit, speaking about the importance of our people-to-people ties and the bonds that have been built between our two nations. That event provided an opportunity to reflect on the particularly strong ties between the U.S. and Greece and the long history of philhellenism in the United States.

America of course was founded on the Greek ideas of δημοκρατία. Our founding fathers studied ancient Greek classics; their political vocabulary relied on Greek words; and their revolutionary imagination was explicitly inspired by ancient Athenian ideals, especially the rule of law and government of, for, and by the people.

And just as ancient Greece inspired our founding fathers, so too did the American War of Independence inspire Greek fighters in your war of independence 45 years later. Because of our shared ideals, support for the Greek War of Independence became the most popular foreign policy issue in the United States in the early 1820s, during the formative years of our nation.

Philhellenes like Dr. Howe left their homes to join the fight, refusing financial compensation from the Greek government and often enduring great hardship to support their Greek comrades in arms.

After the war, Dr. Howe toured the United States to raise money to relieve famine and suffering in Greece. He collected money that financed eight ship cargos of food and clothing, the largest aid that Greece received from abroad at that time. And as Dr. Sotirakopoulos described, he also constructed Aegina’s first port near where we are now standing. Continuing to support Greece 120 years later, the Marshall Plan would send over 6.5 million tons of US food and supplies to the Greek people following World War II.

And in the same spirit, the United States and U.S. Embassy is working today to support Greece as the country seeks to grow its way out from a decade-long economic crisis.

Dr. Howe’s story is one of sacrifice, compassion, and enormous respect for the shared values that serve as the foundation of our democracies.

So I am proud to be here today for the unveiling of this monument, which will be a reminder not only of a Greek and American hero, but of the ελευθερία and δημοκρατία  that we hold dear and the enduring φιλία between our two nations. And as you approach your bicentennial in 2021, I expect we will often hear the cry Ζήτω η Ελλάδα, Ζήτω η Αμερική. Ευχαριστώ πολύ.