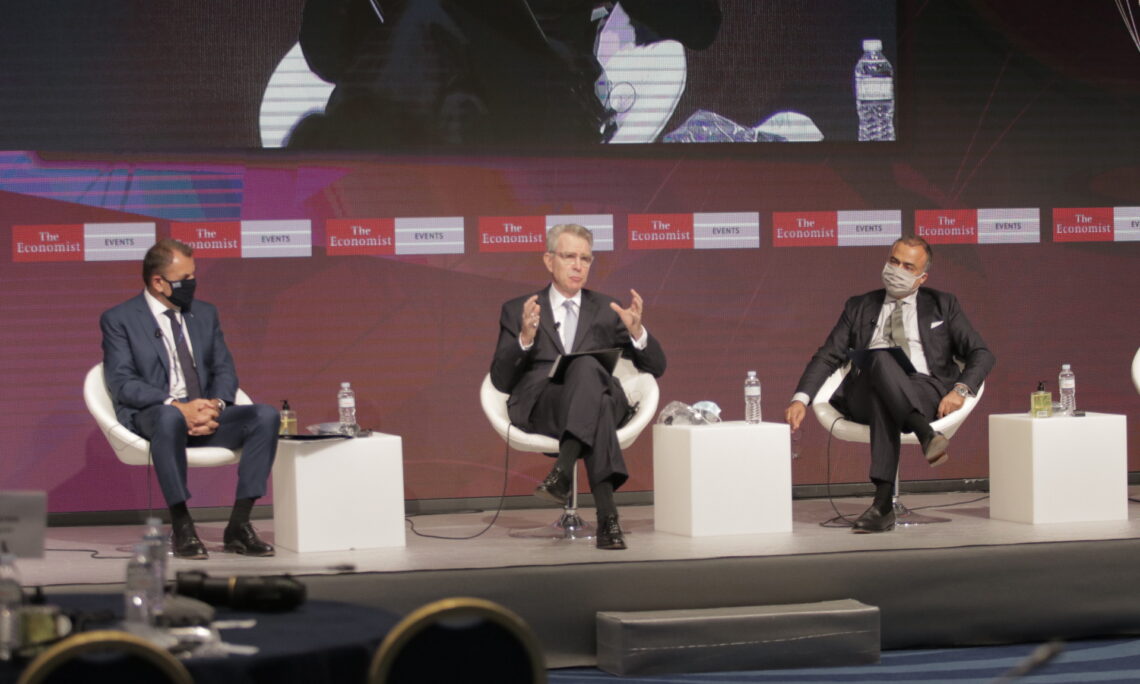 Ambassador Pyatt:  Thank you, Daniel.  First of all, let me say what a pleasure it is to be back. Congratulations to The Economist for building a really all-star morning focused on regional security and defense issues, and I think it’s terrific that you’ll wind up this morning with Minister Hatzidakis talking about the energy security issues because that’s an important part of this as well.

For me, the real pleasure is to be back up on this stage with my friend and colleague Minister Panagiotopoulos.  Fourteen months ago, we were sitting in exactly the same place with Daniel at the end of the row, and we were talking about the agenda of a newly sworn-in Greek government, the first Greek government of the post-crisis era, and if I’m remembering correctly, I talked about our intention to take what was already a very strong U.S.-Greece relationship and elevate it to an even higher level.

And as I was getting ready for today, I did some stock-taking, which reinforced to me how important it is to remember just how far we have come in the past 14 months.

On the defense and security side, of course, the flagship which Minister Dendias talked about is our revised and expanded Defense Cooperation Agreement, the MDCA, which was signed when my boss, Secretary Pompeo, was here in October.  It was a centerpiece for Prime Minister Mitsotakis’ discussions in January when he went to the White House.

But if you look underneath that at all we are doing in the defense and security realm, it really reinforces something which Minister Shoukry talked about, which is the unique and indispensable role of the United States, in particular our military presence in this region.

So just to tick through a couple of the major accomplishments that I would recall:  One is how we have filled in the space that the expanded MDCA has provided, for instance with American military presence in the Port of Alexandroupolis.  U.S. European Command has invested in the removal of a sunken dredger there, which has expanded the capacity of that port.  And just a few weeks ago, the Minister and I were up in Alexandroupolis again for the arrival of the ARC Endurance, the largest cargo ship that had ever come into that port, which was delivering elements of the 101st Combat Aviation Brigade as they moved into Central Europe and the Balkans.  We will be back in Alexandroupolis on a regular basis, and we have now proven the utility and importance of that naval and transport hub.

But there’s a lot more going on.

At Stefanovikio in Central Greece, last winter we hosted the 3-17th CAV, a combat aviation unit which was here exercising with their Hellenic Army counterparts, but also maintaining their readiness in a way that is uniquely available in Greece during the wintertime because of the weather, because of the terrain, and because of the superb relationship that we enjoy with our Hellenic Armed Forces counterparts.

Later this fall, we will welcome the 101st CAB back to Stefanovikio, so we have established a new normal in that regard.

I was delighted to hear Prime Minister Zaev talk about our joint air patrolling over North Macedonia with American B-52s and Hellenic Air Force F-16s, and the warm reception that that operation received from the citizens of North Macedonia.

We have one of our advanced nuclear submarines, the USS Florida, that’s been operating out of Souda Bay.

We have a Special Forces deployment with their CCM vessels which were recently in Cyprus but are homeported at NSA Souda Bay and are working every single day with Hellenic Navy counterparts there and also with counterparts at NMIOTC, which is a critical hub for maritime security operations and training.

We have the USS Hershel “Woody” Williams, which has now arrived at its new home here in the Mediterranean, and the AFRICOM area of operations, and has already visited Souda on several occasions and will be back.

The commercial aspects of our defense relationship are moving ahead.  The modernization of Greece’s P-3 surveillance aircraft and the procurement of Romeo maritime domain awareness helicopters, which the Prime Minister announced in this  Thessaloniki remarks, will give Greece one of the most robust maritime surveillance capabilities anywhere in the Eastern Mediterranean, which strengthens our alliance, makes Greece more secure, but also advances our shared interests.

We’ve had the Hellenic Navy integrated into a U.S. carrier strike group in the Mediterranean.

We have–I’m going down my list here.  We also have our RMQ-9s, which were operating in Larisa, and in December, I had the opportunity to be up there, again with the Minister looking at how the U.S. Air Force was working with the Hellenic Air Force at a facility that is used to project American power and influence across the wider Mediterranean and AFRICOM domain.

Finally, we’ve been very pleased to see the progress happening here in Attica at the Elefsina Shipyard, where the U.S. Development Finance Corporation is working with the American company Onex on the revival of that critical asset which is part of the wider renaissance of the Hellenic shipbuilding industry and is directly linked to the Minister’s and the Prime Minister’s intention to strengthen Greece’s naval capabilities, both completing the torpedo boats which are underway at Elefsina, but also linked to the Prime Minister’s announced intention to acquire four new frigates, and we will have a U.S.  Navy team coming to Greece in just a few days.  I hope they’ll meet the Minister, and they will be here to put eyes on these shipbuilding assets to explore how we can work together in this domain as well.

So we have an awful lot going on in our military-to-military relationship.  I’m very proud of it.  I’m extremely grateful for the partnership and the leadership that I’ve enjoyed with Minister Panagiotopoulos, whose work and whose teamwork with Minister Dendias have been indispensable to getting us where we are today with the direction of the Prime Minister.

And finally, Daniel, if I can just spend 30 seconds, I’m sure we’ll come back to the Turkey question, but since you raised to Minister Dendias the question of American presence and American involvement, I think there’s a fundamental misunderstanding which is reflected in that question, and in many ways, the way in which the United States has worked with our European allies and with the Greek government in managing the current period of tensions in the Eastern Mediterranean is really a model of how transatlantic relations and transatlantic burden-sharing should work.

I have been closely engaged with the Prime Minister’s office and with the Foreign Minister on these issues, in many cases on a daily basis.  But equally important, I’m working very closely with my strong counterpart in Ankara, Ambassador Satterfield.  The U.S. government is coordinating at multiple levels with the German government, and you’ve seen very, very clear messages from my boss, Secretary of State Pompeo, who just in the past few days was in Cyprus, as the Minister alluded to.  Spoke very clearly about American concerns about continued Turkish exploration activities in waters in which Greece and Cyprus assert jurisdiction.  He spoke to this issue with French Radio just the other day.

We’ve made very clear that we are very much part of this equation, and what we bring uniquely to it is what I just spent the past five minutes talking about, which is America’s hard power presence, our ability to project power and influence, and to work with our NATO Allies in order to build stability and prosperity, working towards what Minister Dendias talked about, which is an environment that feels more normal, “a more normal situation,” as he put it, which allows us to focus on the proactive agenda of security and prosperity that I’m guessing Minister Hatzidakis is going to talk about just after us.

The Economist:  Thank you very much.

Just to follow up, on that last point, the misunderstanding that you referred to, just be very clear, is the idea that America somehow has stepped back from the region.  You’re saying it’s far from it.

Ambassador Pyatt:  Far from it.  As Minister Shoukry said, we have an indispensable role, we have unique assets, but we’re also part of an alliance, and the proof of the effectiveness of that alliance is our ability to work with partners, in particular powerful and influential partners like Germany and France. And that’s been happening, as I said, every single day of the week for as long as this has been going on.

The Economist:  And is your understanding that the development that Minister Dendias talked about, the [horse] race going back to [inaudible], was that in any way related to Minister Pompeo’s visit to Cyprus?

Ambassador Pyatt:  I think it was a reflection of a lot of hard diplomatic work by a variety of NATO and European powers.  It’s an important step as the National Security Council said, and the United States is going to welcome anything at all that will help to ease tensions.

But now the work is to get back to dialogue as soon as we can.  As Foreign Minister Dendias said, to have normal diplomacy and to work on some of the underlying issues, and that’s where our focus lies now.

The Economist:  Thank you.  We’ll come back to this, I’m sure, in the questions.