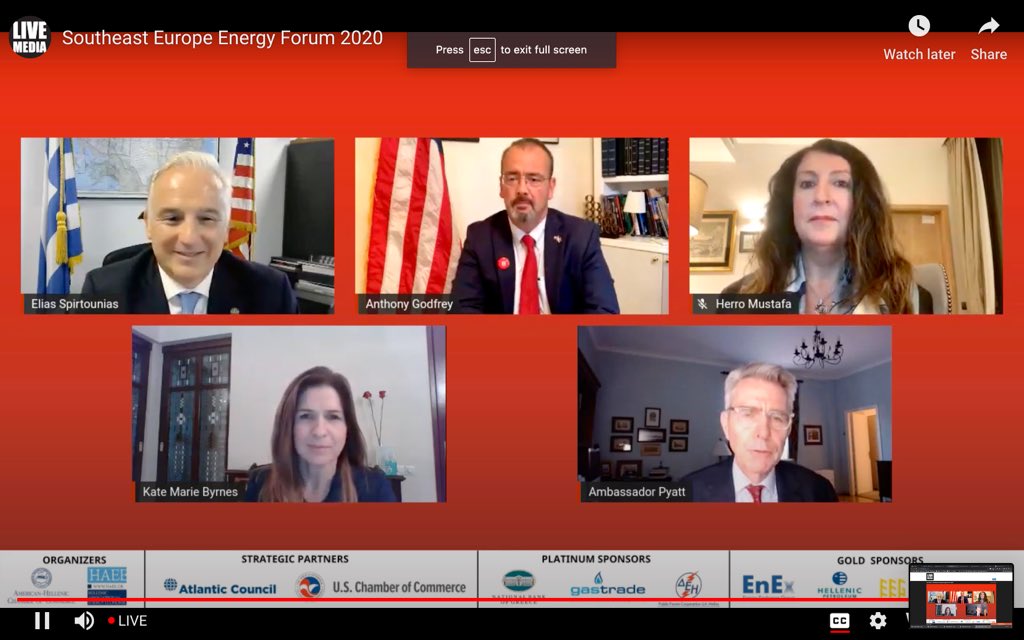 AMBASSADOR PYATT: Thank you very much for having us all on.  It’s a tremendous pleasure for me to be joined by all my friends and colleagues, but also to be back for what is my fourth AmCham Southeast Europe Energy Forum.  I well remember the very first one of these.  We were all together in Alexandroupoli in 2017 with Minister Petkova, and a lot of what we were discussing then in theory has now been transformed into practice, and I think both the Greek state but also AmCham can take a lot of pride in that accomplishment.  If you look at where we are today, it’s no exaggeration to say that energy is one of the most important and strongest pillars of the U.S.-Greece strategic relationship.  It’s something we cooperate on every single day.  You can see it measured in terms of the dramatic increase in U.S. LNG exports to Greece, including over the course of 2020, when there’s been a dramatic shift in the overall Greek energy market that Minister Hatzidakis talked about away from Russian piped gas towards LNG suppliers.

You also see it in the renewables space, where U.S. companies are becoming much more active, whether it’s GE in the wind space, also significant developments that are propelled by Prime Minister Mitsotakis’ bold goal to eliminate the use of lignite coal power by 2028.  So we have one of the signature examples of how that power gap is going to be filled by clean LNG power in the large Mytilineos power facility that I was able to participate in the inauguration of last year, that uses a GE turbine that produces a remarkable 75% less—it only expels 25% of the emissions of existing power sources.

You also see it in the extraordinary progress in the roll-out of regional infrastructure.  The expansion of the Revithoussa terminal here near Athens, which I was flying over earlier this afternoon.  The completion of the TAP pipeline, which will begin commercial operations later this year.  The IGB, which Minister Hatzidakis and I’m sure my colleague Herro Mustafa will talk about.  The Floating Regassification Unit at Alexandroupoli which is moving ahead, as Frank Fannon said, with strong support from the U.S. government.  And I saw it just two weeks ago when I was up in Thessaloniki and was able to visit the Hellenic Petroleum refinery there and talk to HELPE about the importance that they place on their cooperation with North Macedonia and their hopes for the revitalization of the Vardax pipeline, which will both save costs for consumers in North Macedonia and help to deepen the regional infrastructure.  And I was really glad that you were able to have Minister Nuredini there in Thessaloniki.  I remember meeting him last year at the energy conference in Thess, and I’m glad both that he remains so committed to this vision of integration and cooperation between Greece and North Macedonia in the energy space but also that he seems so energized by the new mandate that his government enjoys up there.

And then the one thing that I would say has probably changed most in the past year since we were together in Thessaloniki is how the U.S. government is approaching these issues with a much more deliberate and intentional regional focus, and one of the great benefits of that is that I’ve had a positive agenda that I’ve been able to develop with my friends and colleagues Ambassador Mustafa, Ambassador Byrnes, and Ambassador Godfrey.  We all go back a long way, and it’s fantastic that we’re all able to collaborate in this way.  I’m really looking forward to hearing what they have to say from their respective capitals.

I would just note that I share completely the vision that Minister Hatzidakis laid out and which Assistant Secretary Fannon reaffirmed about Greece’s role in helping to redraw the energy map of Europe and how that helps to deepen energy security for the wider region, build resilience, and advance our shared goals.  It also, as Minister Hatzidakis noted, helps to enhance the geostrategic role that Greece is playing here in Southeastern Europe and as part of the American strategy.  So it’s a very exciting time to be working on these issues.  I consider our partnership with AmCham of extreme importance in this area, and as I’ve said, I’m really delighted that we get to take this first foray into a more regional approach and look forward to building on it in the months ahead.  So thanks, and I hope we’ve got Damon now.

AMBASSADOR: Thanks Damon.  Well, I think there are probably two answers.  One, you and I have talked a lot about the geography of this region, and maps matter.  I learned that the hard way when I was ambassador in Ukraine, and it’s certainly the case, and it has been the case for thousands of years in terms of Greece’ role as the meeting point between Eurasia and Europe.  And so the geography explains some of this, but what has also played a critical role has been the willingness of multiple Greek governments now to work with the United States.  And what I would emphasize is how the developments that are coming to fruition now build on, really, decades of U.S. foreign policy: the southern gas corridor, our efforts to build a collaboration among our European allies, our NATO partners, in addressing these issues.  And then Greek governments that recognized, I think, early on, the advantage to getting out from their dependence on a single supplier of pipeline gas and now are in the position to help collaborate and work with their partners.

And a Greek state which has clearly placed a priority on stabilizing and deepening Greece’s cooperation with all of its neighbors, building on this vision of Thessaloniki, a Greece-Bulgaria relationship that’s better than it’s been in hundreds of years, a relationship between Greece and North Macedonia which has finally been clarified by the Prespes Agreement, and I was really excited when I was in Thessaloniki two weeks ago to hear how much constructive focus there was on building business and commercial ties between the two countries and how little talk there was about ancient animosities.  And then leveraging a very strong, traditionally strong relationship between Greece and Serbia, in which Greece seeks to work with the United States actively as a partner in helping Serbia to build its relationship with the European Union and with NATO.  So there’s a lot of geopolitics behind this, and the fact that we today have a U.S.-Greece relationship that’s undeniably better than it has ever been.  I was reminded of that today when I was with General Floros, the Greek Chief of Defense, and we had our Air Force personnel and Hellenic Army personnel in an airborne exercise together, which really put a highlight on how much practical collaboration is happening every single day between these two governments.

So thanks for the question.  And again, thanks for hosting, Damon.  I didn’t know if you were going to be on, so I didn’t get to say what a treat it is to see you again and how much value we at Embassy Athens place on the work that the Atlantic Council has been doing on energy and a whole bunch of other issues to help us deepen and strengthen the strategic relationship with Greece.

Damon Wilson: First, is energy one of those areas where Greece can play a leadership role working in Southeast Europe to promote diversification?  And second, how do you see the U.S. role in helping to navigate or de-escalate these tensions that are escalating in the Eastern Med, which actually are an obstacle to seeing that region as part of the energy solution?

AMBASSADOR: Well, it’s pretty easy, because the answer is definitely yes, it’s already happening.  It was fascinating to me when I talked to the team at Hellenic Petroleum in Thessaloniki to see both the railcars and the tanker trucks being loaded up to send refined products to their filling stations in Bulgaria, in North Macedonia.  I asked them, who’s your major competition in Bulgaria? It’s Lukoil, so they’re competing with Russian product.  They’re also producing and supplying Camp Bondsteel in Kosovo, so you see that the Greek companies, who are very nimble and very familiar with the Balkans, are already quite active, and now all of this new infrastructure that we’ve been talking about is going to accelerate and catalyze that, and I think it will quickly address the pricing question that Anthony properly focused on.  That’s the reason why you see this huge shift in Greece to LNG as opposed to Russian piped gas, which generally comes in through very unfavorable take-or-pay contracts, so at least in Greece, we’ve found great enthusiasm for diversification.

The Eastern Mediterranean situation, as you say, is complicated.  It’s complicated by geopolitics.  As Assistant Secretary Fannon said, we’re very focused on trying to build this into being a driver of cooperation.  And I was very heartened to see and hear the very strong message from Minister Hatzidakis about Greece’s commitment to working with all of its neighbors, building on this solid foundation that we already have in trilateral relationships with Israel, with Cyprus, with Egypt.  Greece’s desire to see energy become a driver of cooperation for all of the countries of the Eastern Mediterranean.  Obviously, we’ve got some high politics and diplomacy which is going to play out in the next few days as Secretary Pompeo makes a very important visit to Cyprus, and I think he is going to be very clear at that point about the United States’ commitment to continued leadership, continued engagement, working with our European allies, and emphasizing the need to bring differences back to the diplomatic table and eliminate the situation which exists today, where there’s a real risk of accidental military escalation.

So we’re going to focus on the upside, the positive aspect of this.  I’m extremely proud of how much we’ve accomplished in the 3+1 relationship between Greece, Israel, Cyprus, and the United States, where the energy working group led by Assistant Secretary Fannon and his counterparts has been the most active of the follow-up mechanisms underneath that umbrella, and where we’re now moving not just to talk about the big, 35,000-foot geopolitics of energy, but also practical cooperation: cybersecurity for energy infrastructure, physical security for energy infrastructure, green energy and how to manage what you pointed out is a very important European transition as part of the Green New Deal.  In the Greek case, it’s important to note that Greece, as part of the European Recovery Initiative, is going to access 32 billion euros in new funding, and Prime Minister Mitsotakis has made clear that he expects a significant portion of that funding to be devoted to green energy projects, and I’m very hopeful that American companies, American technology, and service providers are going to be part of that story.  So, I wouldn’t be in this line of work if I wasn’t an optimist, so I’m going to remain optimistic that we’re going to be able to transform these energy issues, even in the Eastern Mediterranean, to being a driver of cooperation rather than conflict.