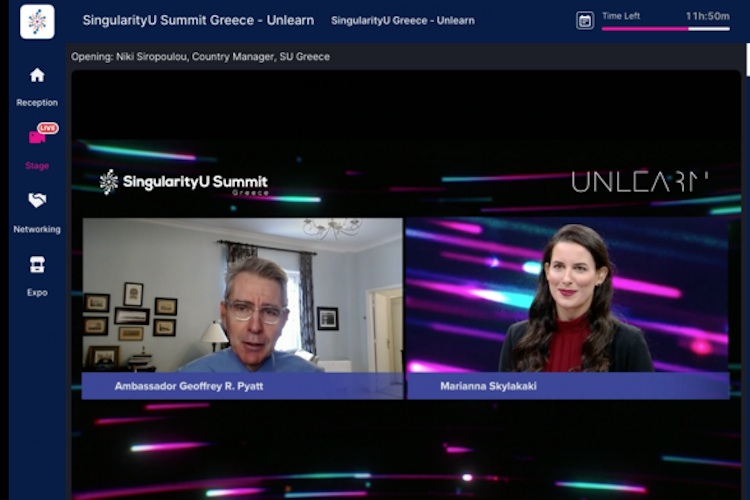 Thank you Marianna. Thanks for the really generous introduction, and thank you to you and Niki for having me here with the Singularity University team. It’s really a pleasure to do this this morning, and I really want to lift up what you guys are doing to promote innovation and exchange between Greece and the United States.

I remember last year when we were doing this in real life, and I was just so impressed when we had some of the Singularity University speakers coming over to the Embassy for a reception at the end of your events. They were all so inspired and encouraged by the conversations. I’m sorry we’re not doing that again this year, but I congratulate you on keeping it going, at least in this virtual space.

All of us have learned a lot of things since March, since the beginning of the pandemic. But I thought I would take a couple minutes this morning to share some of my reflections in case they’re useful to everybody in thinking about where we’re going.

I think it’s still very early to be reaching big conclusions about how the pandemic is going to reshape the world we live in. But it’s clearly accelerated some of the trends that were already at work. The world feels much smaller today than it did before this all began. And I think going forward, one of the lessons that I’ve taken, and certainly I think the government of the United States has taken, is that almost every major challenge we’re going to face going forward is going to require international collaboration. So it becomes more important than ever before that, even with the limitations of the pandemic, we find ways to work together, to build a common approach.

I would say the other issue that has clearly come to the fore is the impact of technology and the importance of digital skills. And so in that regard the kind of work that Singularity University is doing is critically important.

I’ve talked about this a lot before. When I look back on my 30 years as an American diplomat, the most important single change that I’ve experienced is the instantaneous global availability of information, the way in which it’s reshaping business, education, but also aspirations. Not so much in the developed world, in Europe, or in the United States, but in the developing world, in Asia, in Africa, I think we’re just at the tip of the iceberg in seeing the way in which this is going to reshape the global economy.

In this very dynamic environment, I thank you for the very kind remarks on the U.S.-Greece relationship. I think one of the things that strengthens that relationship is the fact that our two countries share values. We are both democracies. Our societies are characterized by a spirit of innovation, by the value that’s attached to creativity. And I think, speaking for the Embassy, we want to continue to leverage that as we go forward.

I think as we look at where the world is going to be in 2021, obviously the defining task is to overcome the pandemic. I’m very proud of the fact that we have maintained very strong transatlantic cooperation in working on these issues and that’s nowhere more true than in the U.S.-Greece relationship — the leading role that’s been played by Pfizer, working with a German company. And of course at the helm of Pfizer is a Greek, our friend Albert Bourla, probably Greece’s man of the year, and a proud citizen of Thessaloniki.

But I also am very encouraged, as you’ve talked about, that even with this disruption of the pandemic we continue to see progress on these issues that the Embassy has been working so hard on, in terms of growing the American investment relationship in the high technology space.

A lot of this goes back to seeds that we planted in 2018 at the Thessaloniki International Fair. But it also reflects the fact that American companies are recognizing the value proposition that Greece represents — whether it’s Microsoft and the very large commitment that they’ve made to their new data centers here in Greece, Pfizer, Deloitte, Cisco. And also the continued growth of the Greek startup sector, which I think owes a lot to the policy signals that Prime Minister Mitsotakis’s government has sent.

I remember vividly four years ago one of my very first meetings with young Greek entrepreneurs in the digital space. I asked them at one stage, “What do you need from the government?” And the unanimous answer was, “Just to stay out of our way.” And I think the way in which Minister Pierrakakis and the Prime Minister and Alex Patelis and the rest of the team have worked to create that enabling environment is really inspiring and clearly American investors are taking note. The Embassy and the U.S. government are going to continue working as best as we can to try to leverage and accelerate that trend.

A couple of other quick thoughts. As you noted, the Embassy’s been working on these issues for a number of years. I’m very proud of the work that we’ve done. I was really heartened when Secretary of State Pompeo travelled to Thessaloniki this fall, and was able to underline the priority that we place on our digital cooperation. The fact that he was joined by Michael Kratsios, the head of the White House Office of Science and Technology Policy, and signed with Minister Georgiadis a new science and technology agreement which we are already investing in as a vehicle to grow our S&T relationship. And the fact that our big companies — I’ve already talked about Microsoft; you’ve got Google, which has also announced a million dollars of funding to support digital skills and Greek economic recovery. And then the ongoing work of the Embassy.

And I think in the year ahead we’re going to continue to place a special emphasis on the question of women in entrepreneurship, and women in the digital space, and I look forward very much to the big event we’ve planned for Thessaloniki in the fall of 2021, hopefully in real life, to continue our very strong record in that regard.

Last point, and then I’ll leave it to all of the Singularity University team. I think this has been a challenging year in the United States, but we’ve come out of it stronger. I think we’ve seen, of course, the Black Lives Matter protests, lots of debate in the United States about inclusion, about how to further grow our democracy. But I think what you see coming out of that is a democracy that has reaffirmed itself.

I think it’s a happy coincidence that here in Greece you’ve marked the election of your first woman president at the same time that the United States has just elected our first woman vice president, who is also a woman of color, somebody whose family has also Indian-American extraction. So a real positive example of how both of our countries continue to perfect our democracies and work on these types of inclusion.

We’re going to continue working on all of this. We’re going to work with Greece as a partner. 2021 is going to be a big year because of the Greek bicentennial. And I want to use that, as much as Prime Minister Mitsotakis does, not just to celebrate the past, and the links between the American Philhellenes and the Greek independence movement, but also where our societies are going together.

Thanks very much for the work that all of you are doing in this regard, and good luck with today’s conversations!