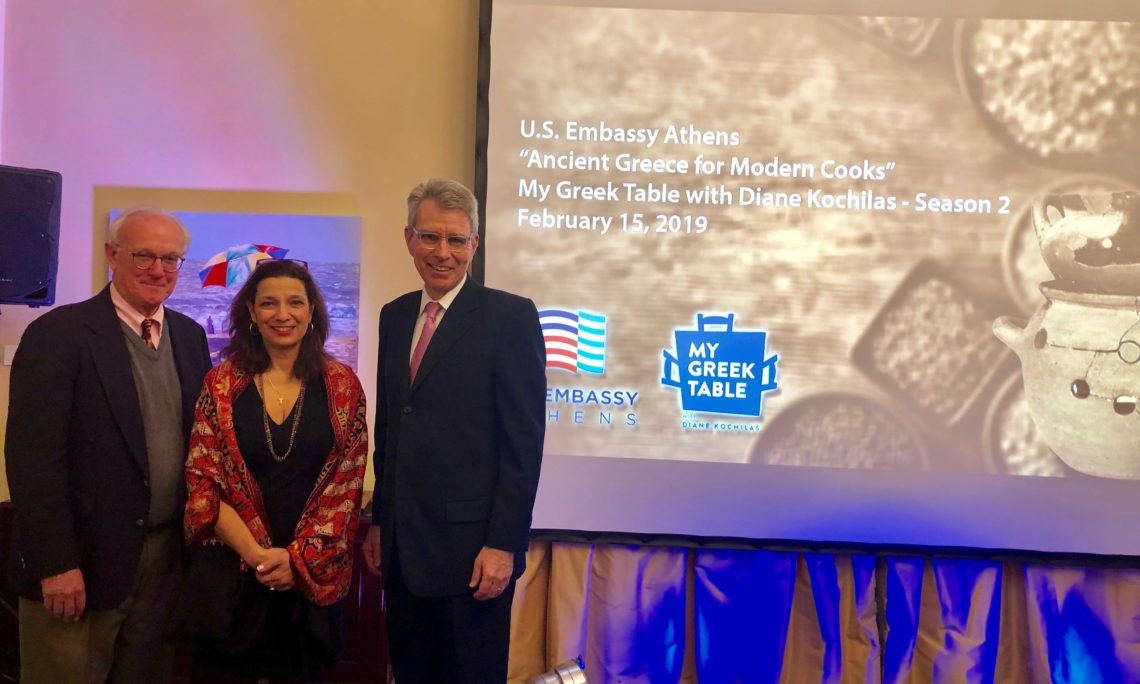 This is a very fun evening and combines two of my favorite things about Greece: one is the food and all of the amazing tastes of this country; and the other is the history and the antiquity. We are very excited that tonight we get to have for the second time, a special sneak preview of a very special television program which is being shown now on over 350 public television stations in the United States: Diane Kochilas’ –My Greek Table.

Diane is a wonderful ambassador for Greece and all the things that make this country so special. But she’s also got a fantastic gift for storytelling. And the thing that I loved about the first season of My Greek Table, was the way in which she combined the amazing sites, the travel that we all enjoy here in Greece, with the story of the food which is so deeply woven into the culture and all of those things that make life in Greece so very special.

Tonight is really special because we are going to have a sneak preview of an episode which is actually set here in Athens and involves another important aspect of the American partnership with Greece, which is the American School of Classical Studies. I remember when I was getting ready to come to Greece almost 3 years ago now, people in the U.S. — in Washington — would say to me, “Wait until you meet John Camp.” And I was like, Who’s John Camp?” I will never ask that question because John Camp is in many ways one of the pillars of the American presence in this country, has done great academic work and he is also like Diane, a fantastic storyteller!

So this episode, combines both Diane’s craft but also John’s science. So it’s a real treat tonight that we have both the preview of the episode but also both Diane and John here to say a few words.

I want to say a special thank you in this context to both the team of the Public Affairs section that put this together but also to all of our colleagues from the American School of Classical Studies, which does such a wonderful job of representing the United States here in Greece. So, thank you all for that.

We are going to put you in front of a television screen right now, but please feel free to come and go. We have a lot of great Greek food. One of the things I learned from last year’s preview is that it makes you really hungry, so do not be shy about getting up and go grab some tiropita or spanakopita and all of the other stuff that’s there. So I’m going to stop talking, and I think I’m supposed to hand it over to Diane now and then John. Enjoy the show everybody!