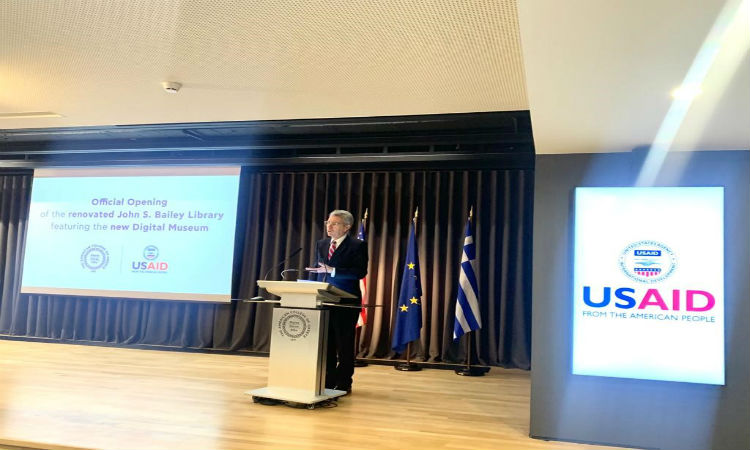 Thank you, Claudia. Καλησπέρα σας.  President Horner, Mayor Zorbas, friends, administrators, students, thank you for inviting me to speak this evening and to join in this inauguration of this beautifully renovated library.  I got a sneak peek of the renovations a few months ago when I was here for an energy conference, but it’s very exciting to see the full result.

I have to say also I particularly enjoyed President Horner’s description of the new kinder, gentler philosophy of libraries. It made me think back 35 years to my own time as a graduate student at Yale when the most infamous aspect of the cross-campus library was what were known as the “weenie bins,” and the “weenie bins” were essentially broom closets with one desk, and you could go into this broom closet and your job was to cram as much knowledge as possible into your mind before you could open the door and come out and go on to whatever you were doing next. But it’s a long way from that to the interactive museum and all these light-filled new rooms, so congratulations.

Our investment here in this library builds on a very long legacy of U.S. government support to American-accredited educational institutions here in Greece.  And we take great pride in our three flagship institutions: the American College of Greece, the American College of Thessaloniki at Anatolia College, and the American Farm School.  All these institutions help to deepen our people-to-people ties, combining Greek roots with the very best of American educational principles and traditions. And I should add that we are fantastically excited about the opportunities now under the leadership of Prime Minister Mitsotakis to take what has always been a very strong pillar of educational cooperation between our two countries with decades and decades of history behind it and to really take it up to the next level.

As many of you know, I was in Washington earlier this month, where I accompanied the Prime Minister during his historic visit.  I’m especially pleased that he chose to bring along with him Minister of Education Nikki Kerameus as part of his commitment to further strengthen our educational ties. And I will say, whether it was at the White House or at Congress or his public events, it was clear that the Prime Minister, on questions of our educational cooperation, spoke with both a deep sense of conviction but also great personal knowledge and a sincere desire to see us move ahead in further tightening these ties.

In that context, we were very pleased that Minister Kerameus was able to announce that Greece will increase its contributions to the Fulbright Program. This will help us to provide more Greeks and Americans with life-changing opportunities to study, teach, research, exchange ideas, and find solutions to common problems.

Minister Kerameus also announced an exciting new partnership with the Institute of International Education that will support a delegation of U.S. university presidents and officials visiting Greece this spring to explore possibilities for partnerships with Greek universities, and I’m confident that President Horner and the team here will be an important part of that undertaking. The U.S. Embassy is supporting this delegation, and we are confident that this effort will identify new ways to deepen cooperation between our two countries on research, joint and dual degrees, and summer study abroad programs.

And I don’t have to tell our friends here at Deree just what an important time this is for exchange programs between Greece and the United States.  President Horner talked about the already thriving record that this institution has established in internationalizing and attracting students from around the world, and I’m told that 265 of those right now are Americans.  These young Americans who have come here to Deree are very much “on trend,” as Greece has become a top destination for American students abroad. More than 5,200 U.S. students studyied in Greece during the 2017-2018 academic year, a 20 percent increase from the year before, and one that I’m confident will continue to accelerate. So, congratulations, David, on leading the charge in this effort to build ties between Greece and the United States.

I wish everyone here at the American College of Greece a bright and prosperous new year. And let’s make the most of this beautiful new facility.  It’s a wonderful gift not only to Deree’s students and faculty, but to the wider community of Agia Paraskevi and Athens and the people of Greece.

Thank you very much, ευχαριστώ πολύ!