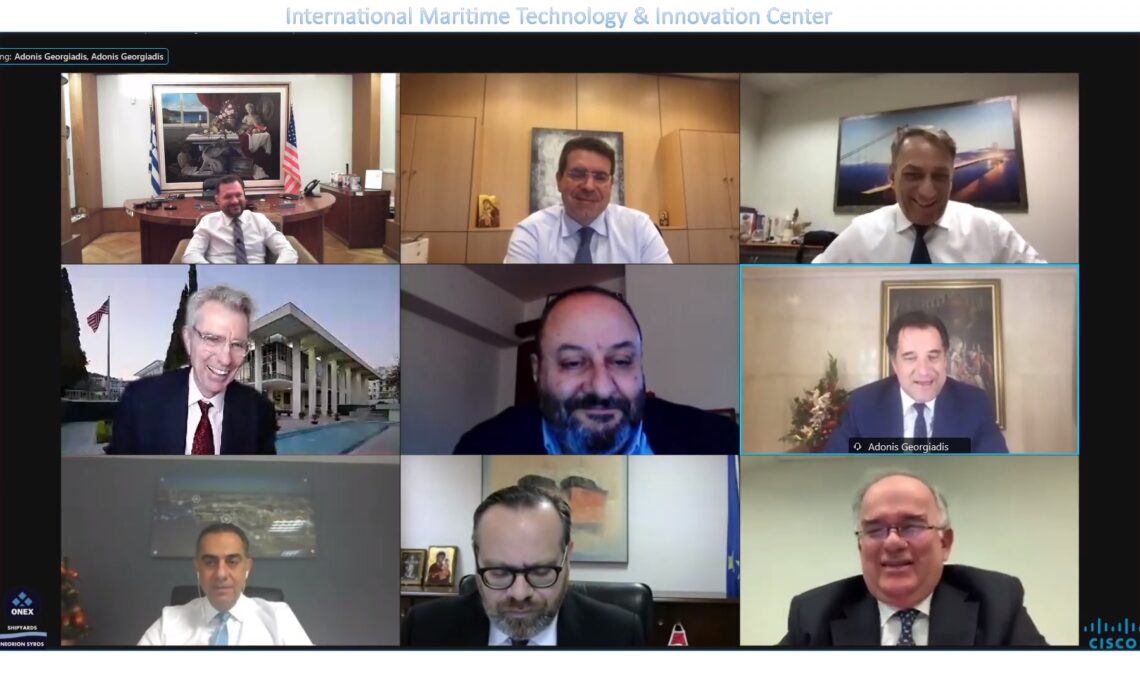 Καλησπέρα everybody.  First of all, Minister Georgiadis, Secretary General Kyriazopoulos, friends, let me say what a pleasure it is to join you for the virtual launch of the ONEX-Cisco International Maritime Technology and Innovation Center on Syros.

And let me also say, Anthony, I love using the Webex platform compared to some of the others. So thank you to the company for developing such a good UI.

Before I start, I also want to offer my very best wishes for the continued, speedy recovery of the Minister of Shipping and Maritime Affairs, my friend Minister Plakiotakis. Περαστικά Minister!

I am very excited about this new high-tech collaboration between ONEX and Cisco.  Over the past three and a half years, I have watched how ONEX has helped to rebuild the Greek shipbuilding industry through its resurrection of the Neorion shipyard on Syros.

When I first visited Syros in 2017, this important maritime asset was rusting away. But thanks to American investment and the hard work and dedication of Panos, his employees, and all of you, the Neorion shipyard and indeed the whole island of Syros have come roaring back to life.

And as a result, the Greek shipbuilding industry grew more than 100% from 2017-2019, with Neorion contributing over 90% of that growth.

The beautiful island of Syros has also benefitted from Neorion’s rebirth, as the shipyard’s reopening has created close to 600 jobs, reaching nearly full capacity this year.

I was back on Syros in July with Minister Georgiadis, Minister Plakiotakis, Minister Vroutsis, and Minister Panagiotopoulos. And I was very pleased then to hear from the mayor, from the Chamber of Commerce, and everybody I spoke with about how the increase in business at the shipyard has benefited the entire island of Syros during what has otherwise been a very difficult year for the residents of the Cyclades.

It’s no surprise to me that American companies like ONEX and Cisco are committed to genuine, mutually beneficial partnerships with local communities while providing the very best in American environmental stewardship and innovative technologies.

I can’t resist pointing out how this real partnership stands in contrast to much of what I’ve been reading in the press recently about COSCO’s management in Piraeus, and where community leaders, like the mayor, have been increasingly vocal about their frustration with COSCO’s heavy-handed, China-takes-all approach.

We are very proud that the U.S. Navy has certified the Syros shipyard to conduct maintenance and repair of U.S. military vessels, and we hope to see ONEX’s success in Syros replicated at the Elefsina shipyard, with the support of the United States’ government’s Development Finance Corporation.

And at the same time, leading U.S. companies like Cisco are placing big bets on Greece’s future as a technology and innovation hub in southeastern Europe.

I want to really commend Minister Pierrakakis’ successful drive to digitize government during the pandemic, including with the recently passed Digital Governance Code, the digital bible, and the launch of COSMOTE’s clean 5G network that the Prime Minister celebrated yesterday, all of which send positive messages to American investors and companies like Microsoft and Digital Realty that have responded with major new investments in Greece’s cloud infrastructure.

I also had the opportunity to meet recently with Cisco’s Digital Transformation and Digital Skills Board in Thessaloniki, and I want to underline how impressed I was by the board’s plans to deepen U.S.-Greece collaboration on emerging technologies in cooperation with the Ministries of Development and Digital Governance and other partners throughout the country. And I really want to congratulate the Cisco team on all they are doing in Thessaloniki today.

I’m also delighted that this Maritime Technology and Innovation Center, powered by Cisco’s cutting-edge technology, is going to open its doors on Syros, which has for so long been a center of Greece’s shipbuilding traditions.

This Syros center will show Greek captains and shipowners how they can use state-of-the-art programs, tracking applications, and big data to optimize their routes, make their fleets more fuel efficient, reduce emissions, and increase profits.

The center will be the next step in enhancing the Syros shipyard and turning it into a beacon for 21st century seafaring, just like those wooden ships that were being constructed in the 17th century that you could see in the office of the mayor there on Syros.

Working together, I’m confident that ONEX and Cisco can further unlock Greek ingenuity to help Greek shipowners and their crews transform their fleets into the most innovative in the world.

I am proud that American companies and the U.S. government are playing such a central role in helping to reinvigorate Greece’s shipbuilding industry, which has been central to Greek identity since the Athenian fleet carried the day at the Battle of Salamis 2,500 years ago.

And just as that ancient maritime technology changed the course of Western history, I’m confident that the next-generation digital technologies that Cisco and ONEX are collaborating on will help to revolutionize modern Greek shipping.

U.S.-Greece cooperation in the maritime and defense sectors continues to grow from strength to strength, based on the principle and the strategy that a stronger and more secure Greece serves American interests and strengthens our NATO Alliance.

Together, our countries are doing powerful, transformative work to promote security and stability in this region and usher in what I’m confident will be a new era of shared prosperity.