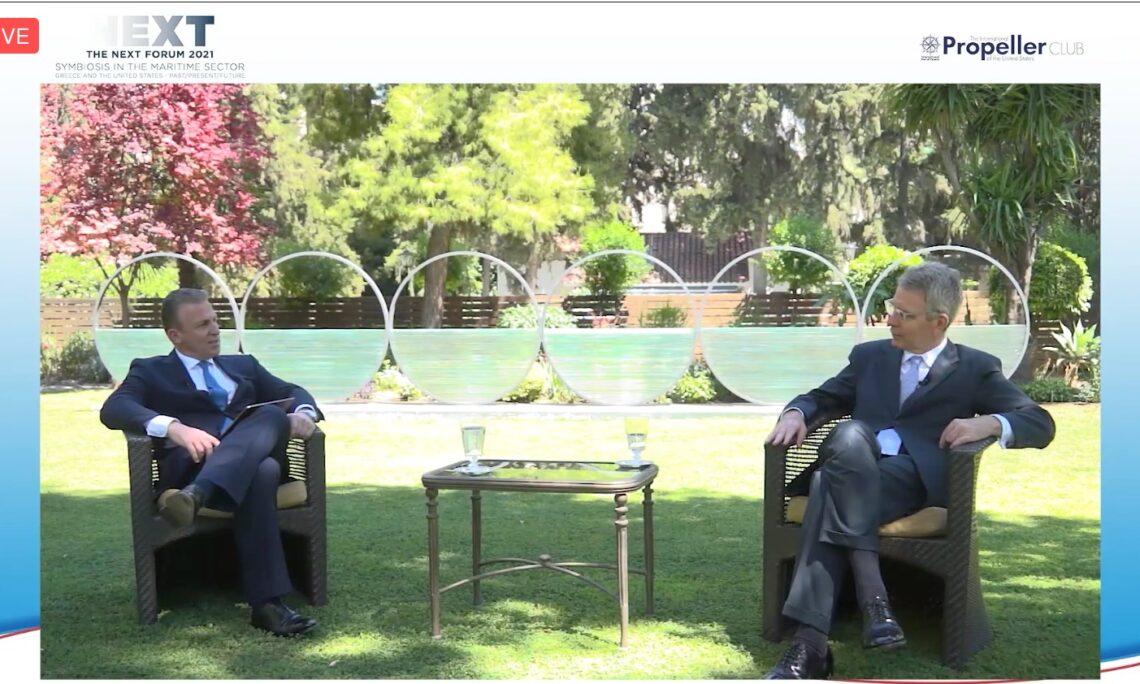 Kalispera sas.  I want to start this evening by thanking Costis Frangoulis and the Propeller Club for inviting me to deliver this keynote address at the inaugural NEXT FORUM.  Greeks have a long and distinguished history as seafaring people, so I’m proud to support such a fantastic initiative that highlights the strong tradition of U.S.-Greece collaboration in the maritime domain—past, present, and future.

As President Biden told Prime Minister Mitsotakis on the 200thanniversary of Greek Independence, the United States is firmly committed to the future of our alliance.

Our partnership with Greece is at an all-time high, and we value Greece as a steadfast, likeminded ally in advancing our shared vision of stability, peace, and prosperity in the Eastern Mediterranean, Aegean, and Black Sea.

Just before Easter, I had the honor of welcoming the U.S. Coast Guard Fast Response Cutters ROBERT GOLDMAN and CHARLES MOULTHROPE to the port of Piraeus with Minister Plakiotakis and Vice Admiral Kliaris.  The Coast Guard’s transatlantic voyage reaffirmed the U.S. commitment to our NATO Alliance, demonstrating how we are strengthening national and maritime security by extending the U.S. Coast Guard’s global reach.

Here in the Mediterranean, our combined exercises with the Hellenic Coast Guard and the Sixth Fleet highlight how far we’ve come in integrating our capabilities to build stability across the maritime routes in this strategically important region.

The United States and Greece have been supporting each other at sea for two centuries.  Proof of this can be found at the new Philhellene Museum here in Athens, which holds a moving letter that Greek independence fighters sent to naval officer David Farragut, the first Admiral of the U.S. Navy, asking for his support.

Our countries’ close and mutually beneficial relationship is rooted in our deeply held democratic values, the revolutions that these ideals inspired, and the aid that our peoples have provided to each other over the years to uphold liberty and justice for all.

That’s why I was so happy to participate virtually in a commemoration of Greece’s bicentennial that took place aboard the USS Constitution in Boston Harbor last March.  Not only is the USS Constitution an enduring symbol of the honor, courage, and commitment of America’s sailors, but it also has a unique historical link to the Greek Revolution.

During your revolution, the ship we call “Old Ironsides” joined America’s squadron in the Mediterranean Sea.  While keeping sea lanes open to merchant shipping, the squadron also protected private American vessels delivering humanitarian relief and provisions from philhellenic committees in the United States to the Greek freedom fighters.

More recently, another ship, the U.S.-built Hellas Liberty in Piraeus, tells the story of American aid to the Greek shipping industry after World War II, which was critical to the rapid revival of the industry and the employment of thousands of Greek seafarers after the devastation of the second World War.

Moreover, as part of the Marshall Plan, the U.S. Army Corps of Engineers cleared the Corinth Canal in 1947, reopening an important maritime artery and helping to resuscitate the Greek economy.

Today, the U.S.-Greece maritime relationship continues to play an important role in advancing our national security objectives and economic prosperity.

I was honored to join our partners from the Hellenic Armed Forces at the Port of Alexandroupoli earlier this month for the DEFENDER-Europe 21 exercise.  The arrival of the Liberty Promise at this strategic port to offload over 300 pieces of military equipment for this large-scale exercise highlighted Greece’s key position at the nexus of maritime routes bridging Europe, Asia, and Africa.

And of course, the United States government is strongly committed to our bid for the Hellenic Navy’s Frigate Modernization Program, with a unique co-production approach that will give an important boost to the Greek shipbuilding industry and to Greece’s long-term security.

I’m proud to see two strong U.S. bidders in the Alexandroupoli and Kavala port privatizations.  In addition to the transit of U.S. military forces, these ports support critical energy infrastructure in the region like the Alexandroupoli floating storage and regassification unit and the natural gas power plant.  The U.S. International Development Finance Corporation is interested in these projects as well, demonstrating how maritime infrastructure can be a force multiplier.

Meanwhile, the Syros shipyard has been certified by the U.S. Navy to conduct maintenance of U.S. military vessels, and at the end of 2020, I was delighted to help inaugurate the new ONEX-Cisco International Maritime Technology and Innovation Center on Syros.  Powered by Cisco’s cutting-edge technology, the center will help to transform the Syros shipyard into a beacon for 21st century seafaring.

We’re also building on our longstanding law enforcement partnership by helping Greece’s interagency community to improve its response to emerging maritime threats.  Last month, for instance, the Hellenic Coast Guard was able to seize 46.7 kilos of cocaine on a ship in Corinth, with enforcement information provided by the U.S. Drug Enforcement Administration.

For nearly a century, the Propeller Club has supported our multifaceted maritime relationship, building bridges between the Greek and U.S. shipping communities.  One important aspect of these bridge-building efforts is the Club’s annual AMVER Awards Ceremony to honor Greek shipping companies and vessels, which I have proudly participated in for the past five years.

The AMVER program has saved thousands of lives, and while it began as a U.S. Coast Guard initiative, Greece has distinguished itself as the first country to earn more than 2,000 AMVER Awards for two consecutive years.  The rescue operations that these ships perform every year are truly inspiring, and Greek merchant shipping leads the world in helping to keep our waters safe.

Together, the United States and Greece are taking our relationship to exciting new heights!  And when our two countries work together, the sky is the limit for what we can accomplish.  Both the region and the wider international community are safer and more secure as a result of our alliance.

So I want to again thank the Propeller Club, which has done so much to deepen and strengthen the U.S.-Greece relationship over these years, and I wish you all a very productive conference.  Efcharisto poli!