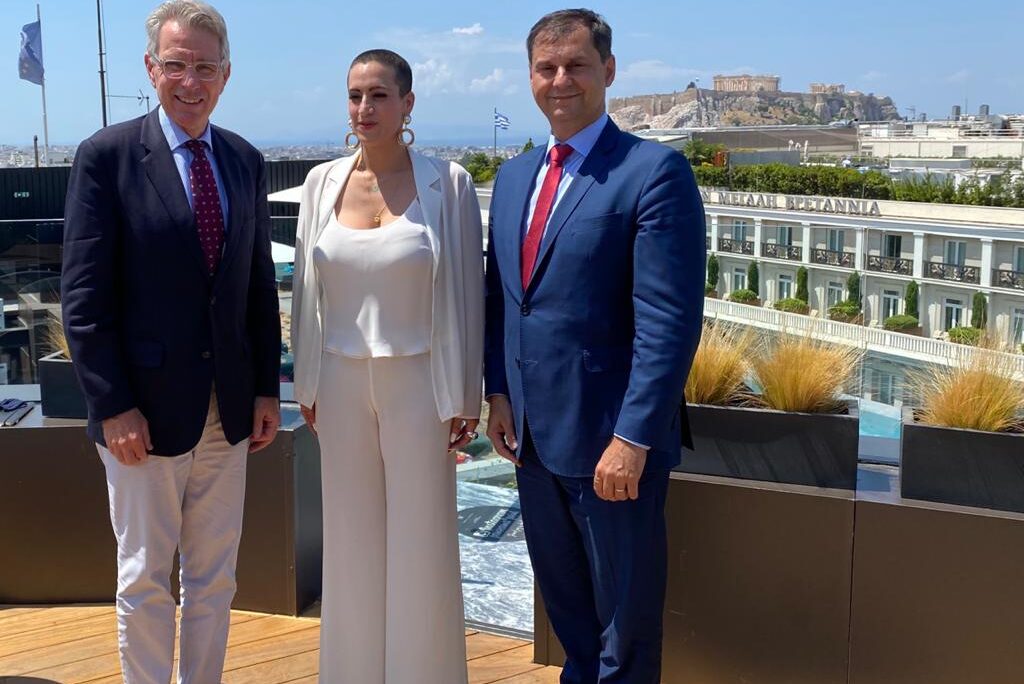 Thank you, Elpida.  Let me start by saying how delighted I am to be here with Minister Theocharis, but also how really pleased I am that the American Embassy has been able to be a partner for MExoxo, and to say how proud I am to see the fantastic network that you’ve built, including with so many of our key partners from key ministries.

I’m also really happy that we’re able to join forces in this way, bringing together the resources of the American Embassy with some of our American companies, including Google.  And I very much look forward to continuing this collaboration together over the next few years.

I’m delighted to see so many Secretaries General from all the key ministries that you work with.  We are very proud of our partnership with Minister Pierrakakis and the really pathbreaking work that you and your team have done to fast-forward Greece’s digital transformation, a lot of which has been anchored in the tourism sector.  And I had very good discussions last week with Amazon Web Services, which powers much of the back end of the Greek system, including travel.gov.gr, which has been so important to our American visitors.

And I am really delighted to see so much high level support from so many different sectors, continuing to strengthen this really important relationship between Greece and the United States.  It’s one that I’ve invested a great deal in, but also one that President Biden and my government are truly committed to.

Since the end of the lockdown in May, we’ve all been reminded of how much Greece has to offer.  And I want to share my really warm congratulations to Minister Theocharis for the smart and ambitious and effective way that he has managed Greece’s re-opening to tourism to include active outreach to all of the U.S. carriers which has produced the largest number of direct flights from the United States to Athens that we have seen in many decades.  And I will say from my own fieldwork over the past month and a half from traveling around to Greece, I’ve never seen so many Americans.  I think part of the story of 2021 is this will be the year of American tourism in Greece, so we’re all very very happy about that.

The Minister’s motto for this promotional season has been, “All you want is Greece.”  I know there are a lot of Americans that agree with that sentiment after a very difficult year and a half of lockdown, but I have also learned through five years of having the privilege of living, working and travelling around this country that there is so much more to Greece than just the islands.

The history, the culture, the mainland, the Peloponnese, Zagoria — you could really spend a lifetime before you have absorbed all that this country has to offer.  And in travelling around Greece over the past five years I’ve been impressed at the number of really smart, business savvy, entrepreneurial women that I’ve met in this sector, which convinces me that this is a good area for us as the Embassy to invest in. These are people who really embody the Greek principle of philoxenia.

I’ll share a short story.  In June, when my children came from the United States on one of these direct flights to visit us, we went for the first time to Amorgos, which is as all of you know a relatively undeveloped, traditional, simple isolated island.  And we had the opportunity to stay in a very traditional, 1970s style Greek family-owned hotel called the Lakki Village.  But the really interesting thing about the Lakki Village is it’s owned and operated by a group of five women, and these are five sisters, and they have a fascinating personal story.  They grew up in that part of the island in Aegiali at a time when there was no paved road to the chora.  They had a father who insisted that each of them come to live in Athens with a relative, when they were in school age so that they can learn English.

They’ve all come back, and they really do embody that principle of philoxenia but also the enormous pride that they have in what they’ve accomplished.  They’re also successful businesswomen, not only do they have this very traditional family style hotel right on the sand at Aegiali, they also have a very swish resort and spa that they’ve now built up the mountain that has yoga retreats and all of that kind of stuff which they market very aggressively in the United States.  In fact, one of the sons is an American citizen because he was born when one of the sisters was living in New Jersey in the 1970s.  So it embodies both the people-to-people aspect of our relationship but also all of these individual stories of really impressive business savvy, but also because they’re on Amorgos.  The hardest part of their job is marketing themselves, getting into global markets and competing at that level.

I’m excited that we’re working together in a way that will help to empower that small medium side of the Greek tourism stories.  The Embassy has a little bit of history in this sector and I know in the past we’ve worked with Agapi Sbokou who was one of our heroes who we highlighted in the “U.S.-Greece Making It Happen” campaign that we built around the Thessaloniki Fair in 2018.  But Agapi has now been partnering with big American brands like Marriot, Starwood, and we featured her as a great example of success.  I know from her experience, cooperating with these big American companies has given her the ability to access more markets, to access a higher level of clientele, and also to get the know-how that she needs to compete in a very competitive global marketplace. And obviously that is going to be part of the story in the years ahead, taking this unique and incredibly competitive and compelling Greek tourism product and helping people to understand that there is more to Greece than just the Cycladic islands that everybody sees on their postcards.

As I mentioned, I am delighted to hear about the partnership with Google and Grow Greek Tourism.  I’ve been working with Google on that project again since 2018 in the Thessaloniki International Fair, and I know how successful it’s been. I also vividly remember when we rolled out Grow Greek Tourism in 2018 with a special focus to begin with in Thessaloniki, the pressure that was coming from politicians from other parts of the country to broaden to cover their regions.  That tells me it’s a good product.

President Biden and the United States have been clear to our commitment to the alliance with Greece, our desire to partner with the Greek government, to see that we all emerge successfully and safely from this pandemic experience — as Minister Theocharis put it, the mother of all pandemics — and that we do so in a way that continues to build and deepen those people-to-people ties.  I know that Minister Theocharis has seen continued interest from American companies, not just our airlines, also our cruise companies.  There are a lot of American cruisers coming to Greece this summer.  And then we have so many of our American brands that continue to grow their presence here — Hyatt, Starwood, Avis — all American companies that I have seen during my tenure, growing their commitment to work in Greece and helping to grow the Greek tourism industry.

We want to make sure that Greek women are part of that story, are able to take advantage of the tools and the empowerment they need to take full advantage.  And this is one part of a larger Embassy strategy, to focus on women’s empowerment.  We’ll be doing more on that in the months ahead and you’ll be hearing more from us, including a full slate of programs.

Cindy was just up in Ioannina for Code Girls, which is one of my very favorite projects.  One of the first things I did when I came to Greece was travel up to Trikala for “Code Girls Trikala.”  And I saw there how fantastic that project is, to inspire young women to get into areas like science and technology and mathematics that are not traditionally open to them.  I’m very excited that our next stop is going to be on Syros, one of my favorite islands.

We also have another project called FEMpowerment with Regeneration, which is focused on employability skills.  Then at the Thessaloniki Fair in September this year, we are going to again have our TechCamp in partnership with the Ministry of Digital Policy.  This year it’s going to focus in particular on women start-uppers.

I will always remember one of the years when we run our Agora in Thessaloniki, we had a coding clinic that was run by a 14 year-old young man.  He was there the same time Prime Minister Mitsotakis and I were walking through.  At that point Kyriakos Mitsotakis was leader of the opposition.  We both were blown away by this kid who was instructing people 10 years older on how to learn coding skills.  But what I remember most was him telling the Prime Minister when the Prime Minister asked, “What do you want to do?”  He said, “I want to go to MIT.  I plan to graduate in three years though because I’m really focused on getting my first public offering of stock before I reach 25.  I don’t want to be too old while I’m still in school.”

Your definition of old changes as you get older I have found.  But it’s tapping into that kind of ambition and that kind of energy that is one of the most exciting things about what we do here at the Embassy.  As I said, we want to make sure that the women’s empowerment story is very much a part of that larger effort.

Let me conclude again congratulating everybody at MExoxo for the work you’ve done on this. Thank you to all of the partners who are working with you for your investment in the future of this important part of Greece, but also thank you for the partnership with the Embassy which we are very proud of.  Efcharisto poli.