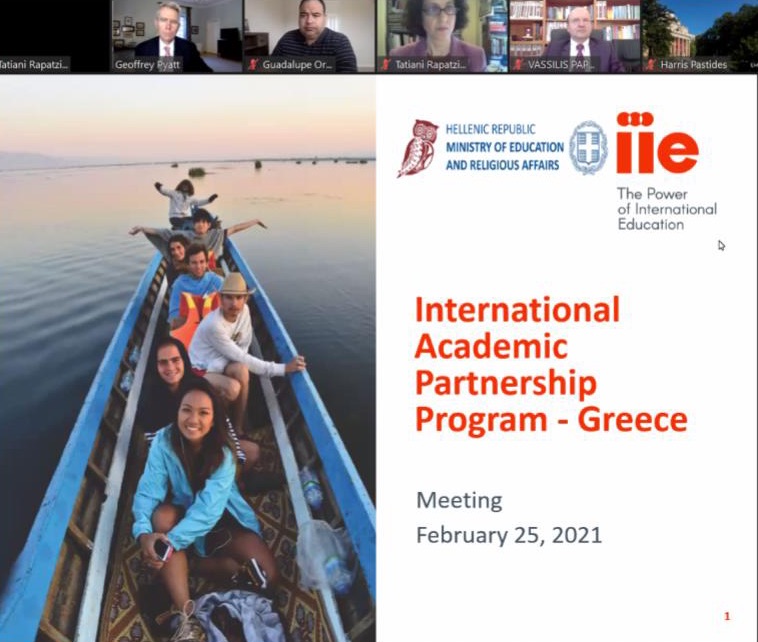 Thank you, Claire.  Thank you, Minister, for the really gracious remarks, and let me say a special thanks especially to Allan Goodman and the team at IIE.  What I want to share with all my American colleagues across the U.S. educational establishment is a sense of your government’s strong commitment to this educational partnership that we’re building with the Greek government right now.

Education has been for many decades one of the real bright spots of the U.S.-Greece relationship.  We celebrated a major anniversary of the Fulbright program relatively early in my tenure.  Minister Kerameus was part of Prime Minister Mitsotakis’s delegation to the White House when he went there last year.  That was a reflection of the priority that both governments, and in particular Prime Minister Mitsotakis, has placed on strengthening our educational ties.  It’s a prominent part of the agenda for our Strategic Dialogue with Greece, where the Foreign Ministries come together, and it’s an area where I know President Biden and his administration are committed to further deepening the strategic relationship between our two countries.  We have a very strong signal of engagement already from the President, from the White House, from the new leadership of the State Department, and I know that education is going to remain a real featured aspect of that.

I also want to highlight—and I know a lot of you who have been exposed in the past to Minister Kerameus in the past already appreciate this—but how lucky we are to have her as our counterpart at this particular moment.  I really believe there’s a unique window of opportunity to advance and consolidate the U.S.-Greece educational relationship, even through this year of pandemic, and I know each and every one of us has been grappling with the challenges that COVID has presented.  But it’s been impressive to see how Minister Kerameus and her team have continued to put points on the scoreboard in terms of some pretty dramatic reforms to the Greek educational environment with a major focus on the advancement of what the Greek government calls “extroversion,” the development of relations with the rest of the world.  And I know from Prime Minister Mitsotakis that that agenda starts with the United States.  He’s a graduate of Harvard and Stanford whose children go to university in the United States, and he and the rest of the government have clearly demonstrated their commitment to building these ties between our two countries.

I’m very grateful that Dr. Goodman and everybody at IIE have been such stalwart partners in this effort.  It was about a year ago when we were looking at having an in-real-life delegation of American university leaders to Greece, and of course we made the right call at the time to pull that down, and I’m glad we’ve been able to keep things moving along even through this COVID year.  I am confident that as we begin to come out of the pandemic, first of all, Greece will be ahead of the curve.  Greece ranks number five in the European Union right now in terms of vaccine deployment per capita, and is generally appreciated for having managed the pandemic better than most.  That has kept infection rates down, it’s kept hospitalization and death rates well below those elsewhere in Europe, and I’ve been really impressed that even during this pandemic year, we’ve had some American students coming to Greece through the programs at the American College of Greece Deree, through College Year in Athens, and through the new Bachelor’s program in English language being offered at the University of Athens.  And so if you can do it in 2020, 2021, you can certainly do it as we look to the future.  The Embassy will be your partner in this regard.  We’ve got a spectacular team.  The public affairs side, my colleague Cindy Harvey is in one of these silver boxes somewhere, and she and her team are in contact every single day with the Ministry of Education and stand ready to assist all of you.

I would finish up by emphasizing why I care about this so much, because my job is to build the long-term strategic relationship between our companies.  But if you look back at the history of our relationship, we’re celebrating the bicentennial, the 200thanniversary of Greece’s war of independence this year, and you can look back on the longstanding educational ties.  Harvard played a major role in inspiring the movement of American Philhellenes.  There was a direct intellectual link between our founders, who looked to the ancient Athenians to inspire American democracy, and then the way in which the Greek Revolution really was the very first liberal revolution in Europe specifically inspired by the success of the American Revolution.

So we’ve got a very long history of academic synergy between our countries, and I think you have to go back very, very far to find a moment in which there is such a good opportunity to take that up to the next level.  And you all are the ones who are going to make that happen.  We at the Embassy and State Department and U.S. government are just facilitators.

I’m thankful for everyone’s time today, and I look forward to hearing how the conversation goes.  And again, Allan, just huge kudos and thank you again to IIE for being such a great champion of this whole initiative.