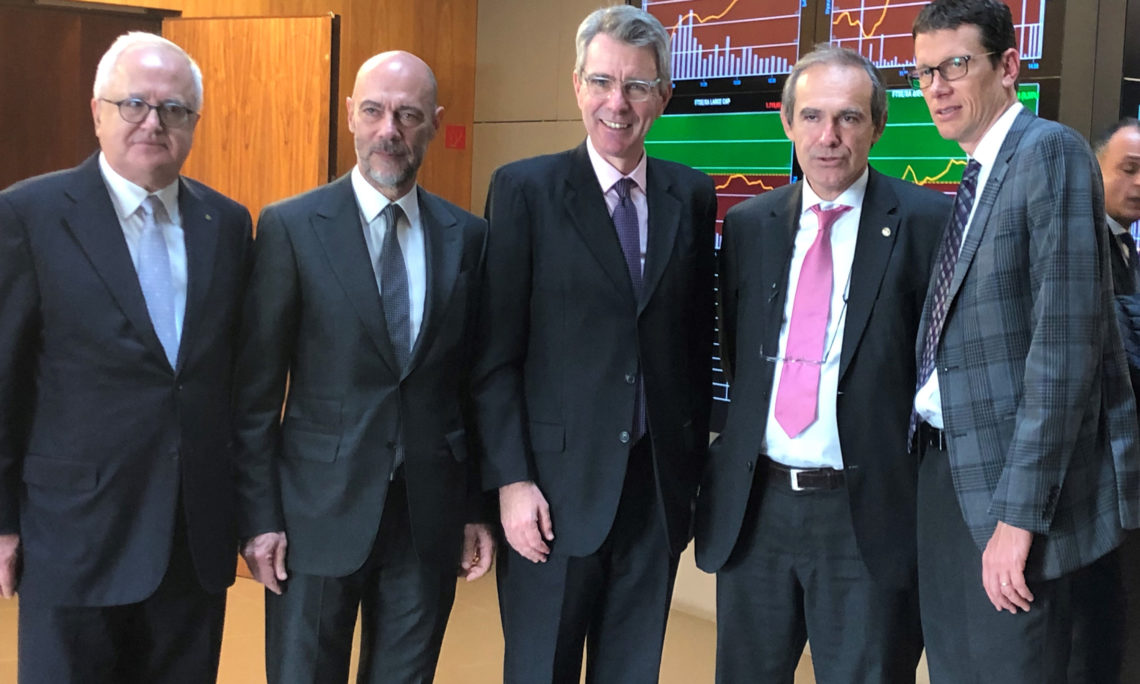 Let me begin by acknowledging that today is the official U.S. government day of mourning for the death of President Bush, and in that regard, I want to acknowledge the many Greeks who have reached out to me to express their condolences on the passing of a truly great American statesman. I think his death should inspire us to redouble our efforts to build the transatlantic bonds that President Bush did so much to advance.

I also want to say what a pleasure it is for me to join you today to celebrate the inauguration of the Roots program, and I want to both thank and congratulate George, Sokratis and Simos. As many of you know, Sokratis and his ATHEX team participated with me in the U.S. roadshow and SelectUSA summit, organized in tandem with the American-Hellenic Chamber of Commerce. And this initiative — Roots — was an idea that first took shape during that visit. And so I am incredibly excited today to stand here among ATHEX leaders, representatives of leading Greek enterprises, our partners in the Greek entrepreneurial community, and others for the official opening of the Roots program.

I’m especially pleased also to note the important role that Arizona State University and the Global Federation of Competitiveness Councils in the United States will play in this effort.

Roots provides, as George alluded to, a hopeful new path to help small and medium enterprises grow in the Greek market.

Today’s young entrepreneurs will be the next generation of business leaders. And to support the country’s private sector growth, it is essential to bring Greece’s economy forward and achieve long-awaited economic transformation. The U.S. economy, of course, has a long and successful history of utilizing capital markets to finance innovation and growth, and I am very excited to see how the Roots program will provide Greek entrepreneurs access to new financing opportunities through the capital markets.

In particular, the Roots program will help to showcase Greek entrepreneurship within a wider network of investors, academics and entrepreneurs from the U.S. and beyond and help them all share best practices. I have often called Greece’s entrepreneurial ecosystem and its startup sector an untold success story, so this program is key in helping to get that story out and telling U.S. and global investors more about the opportunities here.

My team at the Embassy and I are true believers in the power and potential of Greek entrepreneurship. At the 2018 Thessaloniki International Fair, we highlighted our support for this sector as Honored Country, and the American pavilion featured leading U.S. technology companies like Microsoft, Google, IBM, Hewlett Packard, Facebook, and more – examples of how the U.S. culture of entrepreneurial innovation can drive growth and spur economic development.

It was also very important that our neighbor at the Thessaloniki International Fair was Pavilion 12, the Digital Greece pavilion. The Greek government, I’m glad to say, took that opportunity for the first time to showcase hundreds of Greek startups who were able to make connections with their counterparts here in Greece and with leading American companies by walking across the street at the Thessaloniki Fair. Through initiatives like Roots, we hope that more U.S. companies will partner with promising businesses here in Greece and recognize the opportunities that Greece provides.

We’re also looking forward very much to the 2019 Global Entrepreneurship Summit, which launched last month in New York and will take place in Europe for the first time next June in the Netherlands, led by Secretary of State Mike Pompeo.

My colleague, the U.S. Ambassador to the Netherlands, Peter Hoekstra, explained that the annual Summit “values those people who are willing to take the risk of innovation to launch new products and new ideas to solve big problems and create huge opportunities for their communities.”

I also want to highlight the fact that Deputy Advisor to President Trump, Michael Kratsios, who attended the TIF, will also be at the Global Entrepreneurship Summit and spoke at the launch event in New York, highlighting the Summit’s support for innovators and entrepreneurs from around the world. Michael will also be an important part of the U.S. team for next week’s U.S.-Greece Strategic Dialogue in Washington, D.C.

Here in Athens, I’m working with my counterpart at the Dutch Embassy for an event at the Orange Grove incubator for female entrepreneurs as a follow up to the very successful pitching competition we did with them this past March.

And so, as these few examples illustrate, the United States is deeply committed to supporting Greece’s full economic recovery, and in particular the catalytic role that we believe entrepreneurship and innovation have to play. We are confident that a robust Greek economy will lead to a stronger bilateral partnership between our two countries and a greater ability for the United States and Greece to work together on our shared regional goals. This is why one of the main pillars of next week’s Strategic Dialogue in Washington will focus on enhancing our trade and investment relationship. And as the U.S. Ambassador to Greece, I will continue to lead our Mission to support Greek entrepreneurship and to connect Greek entrepreneurial leaders with their U.S. partners.

So, congratulations again to the Roots team, congratulations to ATHEX and thank you so much for having me here today. I am very excited to hear about the developments and achievements that Roots will bring to Greece’s entrepreneurial ecosystem, and I promise you we will continue to be key and strong partners in this regard. Ευχαριστώ πολύ.