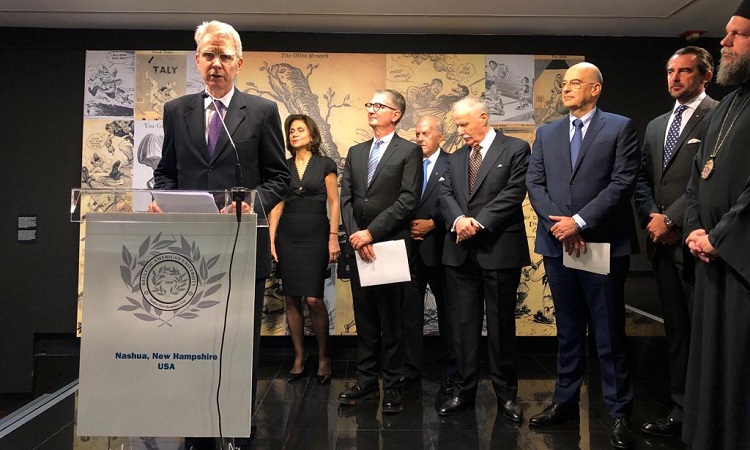 Our dear friends, your Eminence Bishop Gabriel, I want to begin by acknowledging the presence here this evening of Foreign Minister Dendias and to express my deep appreciation for the Foreign Ministry’s support of this initiative.

I also want to recognize Minister Dendias for the extraordinary effort and attention that he and his team have invested in the U.S.-Greece relationship, from his very successful first trip to the United States as Foreign Minister only 10 days after Greece’s elections to his personal role in helping to draft some of the language for our updated defense cooperation agreement
in preparation for the signing with my boss, Secretary of State Pompeo.

And, of course, I want to give public thanks to Minister Dendias for so warmly welcoming Secretary Pompeo and the rest of our high-level delegation to Athens earlier this month for the U.S.-Greece Strategic Dialogue. The Strategic Dialogue provides the playbook for our relationship, acknowledging the exciting gains and also the areas where we will increase cooperation in the year ahead.

For all of us working every day to strengthen and deepen the U.S.-Greece bilateral relationship, Greg’s “Hour of Greece” exhibition is an important reminder of the heroism and visionary thinking that serve as the foundation on which our current efforts to deepen our alliance are constructed.

Looking at the history, you can see that Americans were deeply moved by Greece’s valiant response to the Italian and then German invasions during World War II. With the Allies’ help, the Greek resistance kept the struggle against German occupation alive until Greece’s liberation, and the bravery of the Greeks won American sympathy and respect.

After the great sacrifices of World War II, most Americans were ready to come home, and were skeptical of further engagement by the United States in Europe. But as we got into the winter of 1946 and the spring of 1947, American policymakers could see that Europe was truly on the brink of economic collapse. They realized that, without decisive American measures to help Europe get back on its feet, all that we had fought for together through the Second World War could be lost.

Though it was not popular at the time, President Truman’s decision in 1947 to help the people of Europe overcome the devastation of World War II is now seen as one of the United States’ boldest and most wise foreign assistance investments. This aid came at a time when the people of Greece, like many Europeans, were literally starving, suffering tremendous hardship amid war-torn homes and bombed-out businesses. Through the Marshall Plan, over 6.5 million tons of U.S. food and supplies reached the people of Greece, including the “American cheese” that so many Greek grandparents have often mentioned to me in my travels over the past three years.

We are proud to have supported Europe in its time of need, even with American cheese that definitely is not as good as Greek. But most importantly, the Marshall Plan secured Greece’s place in the West and marked the beginning of our modern transatlantic relationship with Greece and with our other European allies. Our political, economic, and military alliance is, first and foremost, based on our commitment to fundamental, democratic values and our strong people-to-people ties.

In that light, our second U.S.-Greece Strategic Dialogue reflects our shared resolve to take that bilateral relationship to new heights. It also recognizes the central and ongoing role of our people-to-people ties in developing this relationship.

To celebrate the shared democratic values that legions of Greeks and Americans have pledged to uphold and defend, we look forward to cooperating with the Greek government on U.S. programming to support Greece’s own Bicentennial two years from now. We will also continue to enhance relationships between Greek and U.S. museums, share educational best practices, support professional development in cultural and creative sectors, expand English language learning opportunities, and increase student exchanges.

And in this context of a deep history of people-to-people ties, I look forward very much to seeing how Louiza Karapidakis has curated Greg’s personal collection and enriched it with material from Greece’s National Archives to help tell the story of our post-World War II relationship. As
Greg’s collection demonstrates, Americans’ respect for Greek bravery during World War II and our post-World War contributions to Greece cemented bonds that we can trace back to the founding of our modern nations.

And as we near the 2021 Bicentennial here in Greece, I expect we will often hear the cry Ζήτω η Ελλάδα, Ζήτω η Αμερική. Ευχαριστώ πολύ.