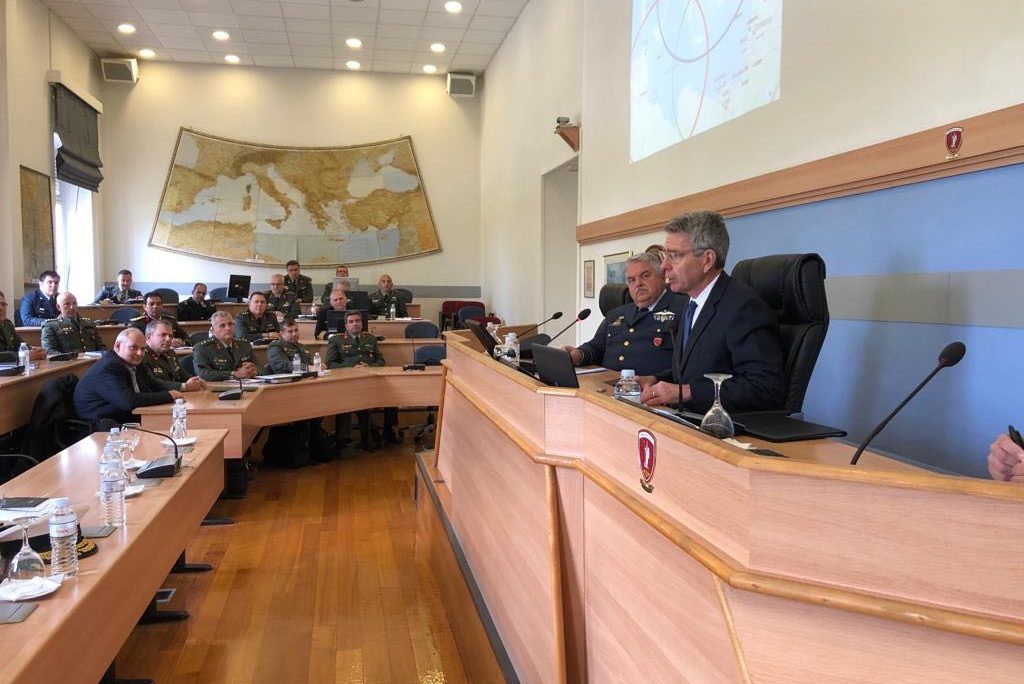 Thank you very much, first of all, Lieutenant General Dimitriou, Rear Admiral Limberis, and Brigadier General Kostis for the welcome..  It’s really a great honor for me to be back at the War College, at this particularly distinguished forum. I always get tired when I listen to that biography, but as you have just heard, I actually joined our Foreign Service in the last days of the Cold War, thirty years ago, and I’ve spent my career almost evenly divided between Europe and Asia, so I spent a lot of time thinking about geopolitics, about how the international system has changed and I really look forward to the conversation today as an opportunity to have a dialogue about the strategic environment.

This Defense College of course is a great example of Greek leadership on regional politics and security, and   I want to start by commending all of the officers here today for your commitment to working with the United States as allies to advance our shared strategic interests.

What I want to do in this brief presentation, to begin with, is share some thoughts on how I see the regional security situation, the important role  that NATO plays in our collective security amd our regional partnerships, and how we are trying to increase our bilateral security cooperation at a time when great power competition, particularly with China and Russia, has returned with a vengeance to the Eastern Mediterranean.

As our governments emphasized during the inaugural Strategic Dialogue last December  in Washington D.C., , Greece is an important U.S. partner and a pillar of stability in a very complicated region.  And as you can see in  the map that’s behind me which is something I developed to try to organize my thinking on these issues, Greece occupies a particularly significant strategic position in the Eastern Mediterranean.

It exists at the nexus of three separate strategic problem sets along Europe’s Southern Flank.  On the one hand, of course, there is the ongoing war in Syria, the threat of Iran, and asymmetric threats arising from the Eastern Mediterranean; that’s the green circle.

To the south, there is the instability, refugees, and other problems emerging from a yet-to-be united Libya, and to the north, the malign influence of Russia exercised through its illegal annexation of Crimea,  increased militarization of the Black Sea, and negative role across the Western Balkans, typified by Moscow’s opposition to the Prespes Agreement and its manipulation of energy as a political tool.

Greece is a critical American ally in dealing with all three of these problems.  And thanks to our presence at U.S. Naval Support Activity Souda Bay, we have a very strong base of operations here as we seek to work with Greece to increase stability and security  across the region.

Over the past two years, our bilateral military cooperation has expanded substantially, and the Ministry of Defense has offered additional non-permanent locations beyond Souda to support U.S. military operations in the region for which we are very grateful.

Greece also supports the deployment of U.S. forces in the Balkans through Alexandroupoli as part of a series of regional exercises with NATO allies and partners.

The Hellenic Army, the port authority of Alexandroupoli, and many others play a huge role in this effort not only, for instance,  by supporting the deployment of the U.S. 4th Combat Aviation Brigade into and through Greece—the largest move we’ve executed in recent memory, through Greece—but also by contributing Hellenic Army forces to exercises like Sabre Guardian 2019, that  increase  interoperability and the readiness of all our forces.

Second, I want to talk a little bit about NATO, which of course is celebrating its 70th anniversary this month.  We cannot forget that NATO is the largest and most successful security alliance in history, and has helped to create the most stable, secure, and prosperous period that Europe has ever known.

The United States remains committed to NATO and to the European Union.  Our security guarantees to our allies are ironclad and non-negotiable.  It  is  in America’s interests for our allies to be strong, sovereign, prosperous, and committed to the advancement of our shared values and ideals.

Terrorism, ongoing conflicts in the Middle East and North Africa, and unprecedented migration flows into Europe are all relatively new areas of focus but they are among the most pressing challenges we face, and the cooperation that is fostered here at the War College is an important demonstration of our commitment to facing these challenges together.

Since joining NATO in 1952, Greece has stood with us, shoulder to shoulder  and its growing importance as a pillar of regional stability means that it will be North Macedonia’s best partner as that country  moves ahead with its accession as NATO’s 30th Ally.

Last month, I was honored to mark the 20th anniversary of the Czech Republic, Poland and Hungary, as Allies in NATO at the NATO Maritime Interdiction Operations Training Center in Souda Bay, a unique facility that contributes to the security and interoperability of our allies and other regional partners.

The United States welcomes the fact that Greece has increased its commitments to NATO in Afghanistan, to the NATO Training Mission – Iraq, to the NATO Air Policing mission, via the NATO Rapid Deployment Corps – in Greece in Thessaloniki, and through increased participation in NATO annual exercises.  Greece has also consistently maintained NATO’s 2% of GDP spending benchmark despite the severe economic challenges that the country has faced.

And American soldiers sailors and airmen  continually tell me how professional and welcoming their Greek counterparts are.  We are very grateful for our partnerships with Greece, bilaterally and as part of  NATO.

At the U.S.-Greece Strategic Dialogue in December, we commended Greece for stepping up to create new alliances that convene an ever-broadening group of regional partners with a mutual interest in security, stability and prosperity.

As President Trump noted, Greece has shown admirable foresight and self-determination in reaching the Prespes Agreement, and the successful visit to Skopje earlier this month helped to validate the investment that the United States has made in our relationship with Greece as a pillar of regional stability and a driver of prosperity throughout the Western Balkans.

In this regard, we applaud Greece’s bilateral military outreach to the Republic of North Macedonia to provide mentorship, training, and planning support throughout that country’s  NATO accession process and beyond.

Greece’s leadership in promoting regional cooperation was also apparent at the Greece-Cyprus-Israel trilateral to advance energy security issues in the Eastern Mediterranean.  My boss, U.S. Secretary of State Mike Pompeo’s participation in that summit last month signaled our strong U.S. support of these ongoing trilateral dialogues.

I also want to commend Greece’s efforts to promote good neighborly relations via the recent quadrilateral meeting between Romania, Bulgaria, Greece, and Serbia and to envision a shared future in European and transatlantic institutions.

The presence here today, of officers from Albania and Egypt, who have joined the Hellenic Armed Forces at the National Defense College,  is a great example of Greece’s commitment to strengthening regional interoperability.

I was again reminded of Greece’s strong regional relationships last week when I visited Andravida Air Base for my third INIOHOS exercise, where the Hellenic Air Force had convoked an impressive array of partners that don’t usually fly and train together.

I know from speaking with my colleagues from the U.S. Air Force that our pilots from the 480th fighter squadron were deeply impressed by their Hellenic Air Force counterparts and also by the quality of the training opportunities that the exercise provided. In this regard I offer my congratulations to Minister Apostolakis, General Christodoulou, and the rest of the Hellenic Air Force for that initiative.

Of course, the Greek military must strike a balance between paying off past procurement debts and sustaining and modernizing its current systems.  Even with difficult budget constraints, Greece has committed to F-16 upgrades, P-3 modernizations, and the purchase of excess U.S. helicopters, among other major procurements.

It was awesome to see the F-35, the world’s most capable fighter aircraft, at INIOHOS, and Greece’s decision to upgrade 85 F-16s to the VIPER configuration will facilitate Greece’s future transition from 3rd and  4th generation aircraft to  5th generation platforms. Upgraded Greek F-16s will act as a bridge between legacy aircraft and U.S and NATO F-35s, ensuring their relevance and lethality for years to come.

In addition to INIOHOS, we’re made great strides in joint training opportunities with other branches of the Hellenic Armed Forces.  U.S. Army Europe, for instance, just completed a first-ever training rotation of a U.S. Army combat aviation brigade unit at Stefanovikio in central Greece.

Due to the exceptional training environment that Stefanovikio provided, that unit exceeded their planned flying hours, returning to the U.S. with significant operational experience and a new partner in the Hellenic Army. And I should add that USAEUR hopes to build upon this success with additional training deployments to Greece in the months and years ahead.

The completion of a second Alexander the Great exercise in January has reinvigorated our relationship with the Hellenic Army’s 32nd Marine Brigade, and we hope to expand this partnership into broader training on amphibious operations with the 32nd Marine Brigade and the Hellenic Navy.  Meanwhile, the Greek Air Force continues to host two unarmed MQ-9 drones at Larissa Air Base in central Greece. And last December, Greece hosted Jackal Stone, SACEUR’s largest inter-agency complex crisis exercise.

All of this cooperation matters as we work with Greece and other allies to increase regional stability in a time of great power competition. And  In this regard I want to conclude with just a little more about Russia.

Through the five years since the invasion of Crimea, the international community has appropriately been united in condemning Russia’s aggressive efforts to ferment instability and discord through hybrid warfare strategies involving the weaponization of information and energy.

I know you all had a chance to speak with our visiting U.S. speaker  Mark Pfeifle about enhancing cybersecurity coordination and collaboration with the private sector, non-profit, and government agencies, and law enforcement to better protect our military, economic, and proprietary data. Open dialogues like these will prepare us to deal with international behavior that defies norms and accepted standards.

We similarly appreciate Greece’s support of the Trans Adriatic Pipeline and the IGB Interconnector with Bulgaria which contribute to energy security through the diversification of energy sources, and routes for all of Europe.

The United States will continue to strongly oppose Nord Stream 2 and the second line of Turkish Stream, political weapons that seek to deepen dependence on Russian gas.  Greece is an essential ally in this projectand we look to it as southern Europe’s energy hub.

To conclude and hopefully to open up to some good  discussion, what the United States and its allies are able to achieve in this part of the world is thanks in great part to the strong bilateral defense relationship that we enjoy with Greece and the regional partnerships that Greece and the United States share.  The security threats in this region have become much more complex in recent years, and they require our combined and concerted efforts more than ever before. And in this regard, I’m very proud of the military partnerships we have built over the past few years with Greece, and I look forward to even more in the time to come.