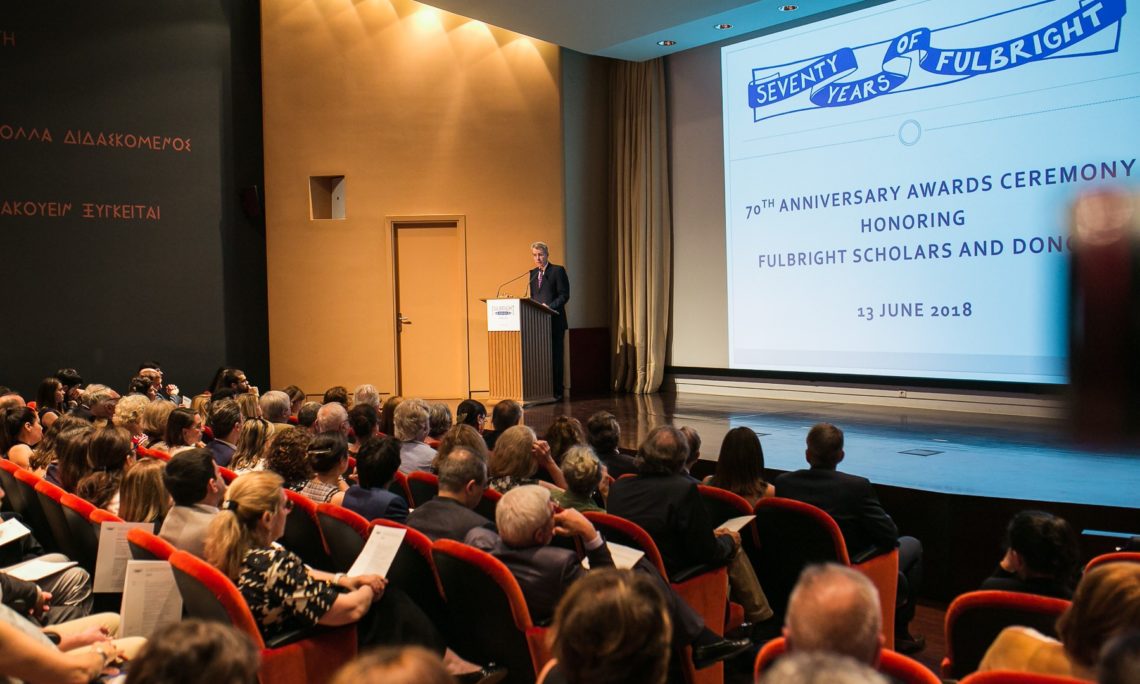 Thank you for your warm introduction Artemis. Good evening Minister Gavrolgou, members of the Fulbright Board and staff; Fulbright scholars and students, distinguished guests, it is my pleasure to be with you agian tonight to honor a great program, and all those who support and participate in it.

This annual ceremony celebrates Greek and American scholars; however, this year it marks a special occasion – the 70th Anniversary of the Fulbright Program in Greece. In this regard, I was particularly touched by the warm words that President Pavlopoulos offered in his remarks a few weeks ago when we were able to have the honor of marking the Fulbright Anniversary at the Presidential Palace.

Today, the Fulbright Program is recognized as the premier international educational program in the world. Fulbright fosters academic excellence and freedom, intellectual integrity, and cross-cultural awareness.

But it is much more than an educational exchange. It is one of the cornerstones of our strategic partnerships around the world.

As partners and allies, the U.S. and Greek governments share perspectives on broad challenges; discuss interests and concerns; and promote common goals. Those mutual efforts show that the United States and Greece have a strong relationship.

And while our respective government leaders get most of the credit for this accomplishment, our strong relationships at the individual level and the close, enduring ties between our citizens are also important. Nowhere are these people-to-people ties stronger than in the area of education.

Reaching out and bringing international students to the U.S. is important to the growth and diversity of our academic institutions. Studying abroad promotes mutual understanding between countries and creates life-long friendships across borders and seas. The relationships that follow connect our political, economic and cultural lives and make them more vibrant.

Everywhere I go in Greece I have university administrators and local government leaders asking me for the more Fulbright Scholars, visiting Professors, and students – showing that Greek academics understand the great value of these exchanges.

Senator Fulbright also understood the importance of educational exchange. When he created the scholarship program that later became his namesake, he spoke of the importance that the program could play in diplomacy.

He said that educational exchange programs, “turn nations into people” and “contribute to the humanizing of international relations.”

Senator Fulbright’s initiative was a bold one at the beginning of the Cold War era, when most were focused on existential military challenges. But he turned out to be right — exchange programs create friendships and understanding between cultures, which in turn increases security and cooperation.

Based on Senator Fulbright’s vision, the Fulbright exchange program has become the model for educational exchange.

More than 155 countries and 300,000 individuals have participated in the Fulbright Program worldwide since its inception in 1946. Fulbright alumni include 37 Nobel Prize winners and 65 Pulitzer Prize winners, as well as many, many other distinguished professionals.

The Fulbright Foundation in Greece is no exception, as it was the first in Europe and is the second oldest continuously operating Fulbright program in the world.

Since its establishment in 1948, more than 5,500 scholarships have been awarded to Greek and American Scholars.

– Eleni Antoniadi, an expert in bioengineering, who has received recognition from the scientific community worldwide for her involvement in life-saving therapies for artificial organ transplants;

– My friend George Stathakis, the current Minister of Environment and Energy, and a scholar of the Marshall Plan era;

– the late Angelos, President of the Benaki Museum, one of the most prominent scholars and leaders in the Greek cultural scene.

– And last, but certainly not least, the renowned artist and director Yannis Simonides, who I had the pleasure of seeing perform his rendition of Ioannis Makriyannis last week here at the Gennadius Library.

As I noted earlier, in April, I was honored to participate in a special ceremony hosted by President Pavlopoulos, who made very clear the Greek state’s full commitment to the Fulbright program. And I particularly appreciate the presence here this evening of the Minister of Education. I look forward to the continued success of the Fulbright Program in the future as well.

And it is in this spirit, in which tonight we recognize the 2018 recipients of Fulbright scholarships.

To be awarded a Fulbright scholarship is to join an elite group of individuals who represent the best in their fields and who embody the spirit of education and global understanding. My congratulations to you all.

I would also like to congratulate the Fulbright Foundation in Greece for their commitment to nurturing the close relationship between our two countries.
I can tell you that if it were just up to diplomats and politicians, we would not be where we are today, and we would not have the breadth, and depth, in the U.S. – Greek alliance. It takes individuals like you, and organizations like this one, to keep the relationship strong.

I’d like to give a special thanks to Artemis and her dedicated, hard-working colleagues at the Fulbright Foundation, who every year make this program such a great success.

And of course, and lastly, I would like to thank the many donors of the Fulbright Foundation here in Greece — the corporations, foundations and individuals that every year renew their trust in the importance of the educational exchanges and bilateral ties that Fulbright creates.

So in closing, I would like to wish Happy 70th Birthday to the Fulbright Program in Greece! Χρόνια πολλά. You’re looking good.