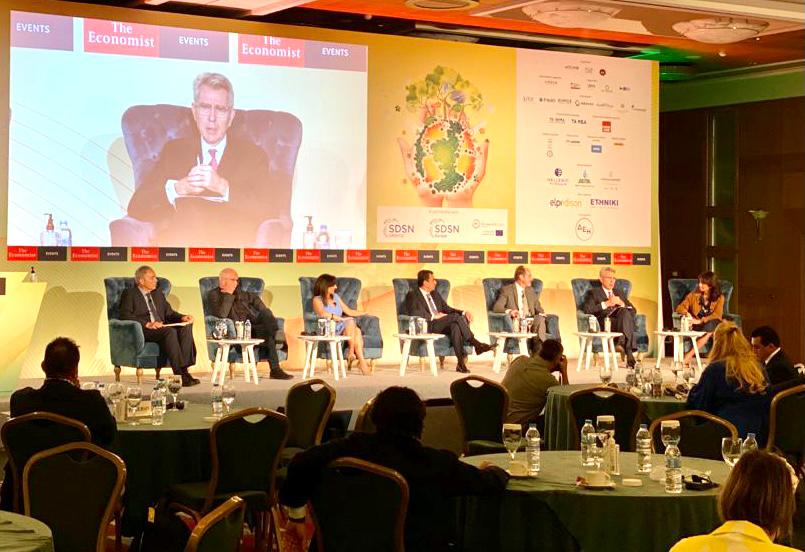 “The Future Europe Wants: A Green and Digital, Job-Based and Inclusive Recovery from COVID-19 Pandemic” Panel

Let me start by saying what a huge honor it is to be on the stage again with Minister Skrekas.  The fact that we are together reflects the degree to which American and Greek perspectives and interests on this basket of issues has really converged.  And we are working together every single day, including last week in Warsaw, where Minister Skrekas was with our Secretary of Energy, Secretary Granholm, discussing exactly the issues that are on the table this morning.

I come to these questions not as a European but as a Californian, a state like Greece which is uniquely vulnerable to the impacts of the climate crisis, whether in terms of wildfire, flooding, mudslides, the impact of ocean temperature change on fisheries, on coastal erosion.  We are in this boat together and we have lived through much of the same.  As Secretary Granholm and our Climate Envoy John Kerry likes to say, the earth is flashing a bright red light.  And nobody in Greece or in California needs to be convinced of that anymore.

The other thing that California has is so much of the innovation in this area. We are the home of Tesla, we are the home of the United States’ largest offshore wind facility, we are the home of Silicon Valley and all the innovation that’s happening on smart grids and smart cities, which is going to be essential to restructuring the way our energy markets function. California has led the world in terms of vehicle emission standards. And this all goes to the point that market forces are ultimately what are going to have to drive this process forward.

I very much appreciated Andreas Papandreou’s opening remarks and Andreas’s reference to what is happening in the United States this week with President Biden’s American jobs plan, very much part of the efforts to build back better but also to use the global crisis as an opportunity to rethink the way we organize our economies, our infrastructure, the work that we all do together.  Certainly vis a vis Greece, the United States’ approach to these climate and recovery issues starts on the premise that we have to work together, we have to harmonize our approaches. That was very much the theme in the conversations in Warsaw, in a transatlantic setting last week.

One of the things that helps this in the case of Greece is the fact that Prime Minister Mitsotakis managed to sustain the pace of reform even through the Covid pandemic, something I don’t think gets enough attention outside of Greece, a country which was mired in crisis through much of the past decade leveraged the difficulties of the past year and a half to accelerate transformations in areas like energy, the very bold goals that the Prime Minster has set out for lignite phase out, but also digitization of the economy and the Greek Government’s intention to focus its part of the ERF on areas that converge with American priorities.

I would also emphasize the participation of American companies in this Greek recovery process, fantastic example in the climate space which I am very proud of. Minister Skrekas just passed the news that the Vermio wind power project has now finished regulatory approval.  That will be the largest wind power project in Greece, 315 MW, representing an investment by an American group of 350 million Euros, with the hope of beginning construction in the Spring of 22.  And importantly in the context of the energy price issue, which I know everybody in Greece is focused on right now, this is a project that will produce electricity at 55/MWh compared to a wholesale price of 130 or the over 200 price that we just heard about from Italy.

But that’s not all that is happening.  General Electric has become active again in Greece in wind power.  Later today I will be joining the signature of the General Electric agreement with the Copelouzos group for a new super-efficient gas fired electricity project in Alexandroupoli, which is essential to filling the power gap that will be created by the Prime Minister’s decision to phase out lignite, but will be co-owned by North Macedonia, reflecting how Greece is helping to project positive transformation not just in this country but up into the Western Balkans in a very important way.

We have Blink charging, 547 energy I already mentioned in the context of Vermio.  And the last one I’ll flag, President Von Der Leyen and Jeff Sachs talked about hydrogen. I’m very proud of a particular Greek-American company called Advent Energy, headquartered in Boston. I got to know them first in Patras when I visited their research and development facilities there. That was when Advent was a scrappy start-up.  Since then they’ve had their Nasdaq public offering, they’ve become a big deal.  They have acquired other companies including in Silicon Valley, and they are the leading Greek entity working on the hydrogen power transformation, their particular area of specialty is hydrogen fuel cells.  And they are also an important part of the White Dragon project in Macedonia, which brings together the big Greek energy players — Motor Oil, PPC and others. But also, critically, the technical and technological expertise of this American Boston-based company, which has a Greek-American behind it.

I can’t resist finishing up with a point, picking up on Alistair’s invocation in the last panel of the world that we want.  And I can’t do better than quote the Rolling Stones and just say, “You can’t always get what you want, but if you try real hard, you just might find that you get what you need.” And I think that’s a very good theme as we head towards Glasgow and the bold agenda that all of us need to work together to secure.