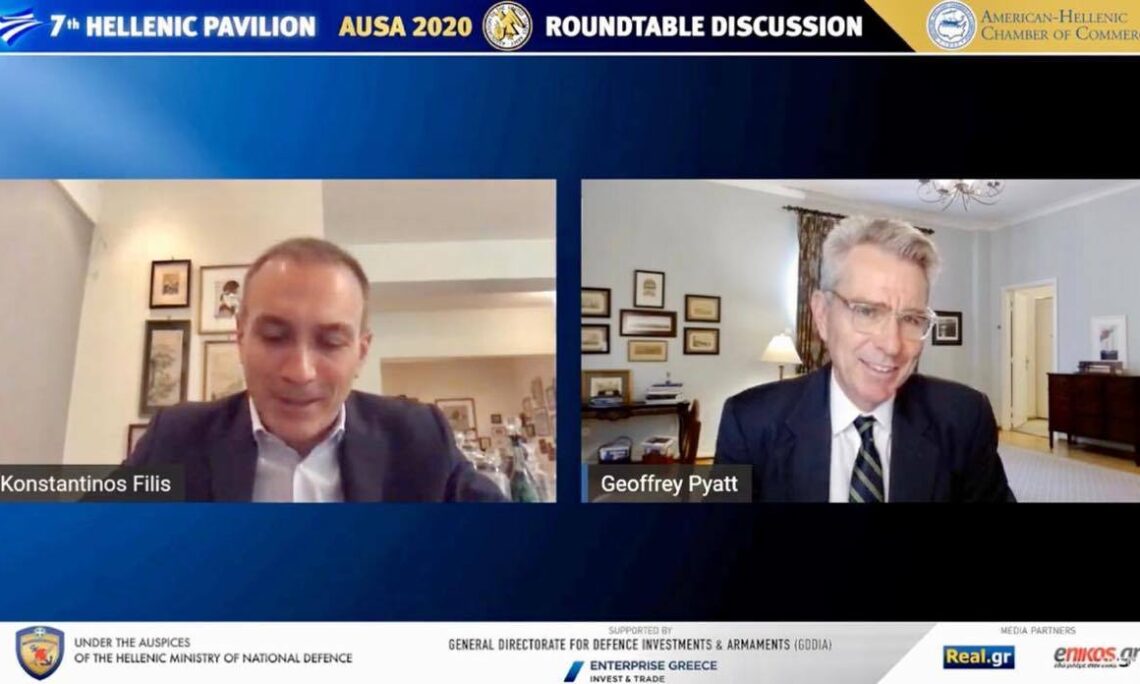 Thanks Professor Filis. I want to focus today on the U.S.-Greece bilateral story, because it’s such a positive one. And I want to start by thanking Niko and the team at AmCham for partnering again in conjunction with AUSA. I really value the past opportunities that I’ve had with AUSA meetings in Washington to highlight the story of the U.S.-Greece strategic relationship. I’m glad we get to do it at least virtually today. I’m particularly honored to be joined by Minister Georgiadis.

And just to address the question you put to him right at the top: I think it’s really important to recognize the extraordinary progress that we’ve seen in the U.S.-Greece investment story over the past year or so. Lots of big ticket, high profile initiatives, like Microsoft and Pfizer, success stories like the revival of the Greek shipbuilding industry in Syros. But I think much more than that is a dramatic change in the perception of Greece as an investment destination for big American companies, the significant expansion of Greece’s profile on technology issues, an area that plays to America’s strength and the strength of our industry.

So there’s a lot that can be said in this area, but I want to focus today on our defense relationship, which really is, as Professor Filis said in his introduction, one of the strongest elements of a multi-faceted U.S.-Greece relationship, an area where we have fantastic momentum, where we’ve seen great progress.

America’s strategy with Greece is founded on the concept that we seek to bolster Greece and Greece’s role as a pillar of stability in the Eastern Mediterranean and the Western Balkans, a country that shares strategic interests with the United States, that shares values, and is well poised, as it emerges from a prolonged economic crisis, to be a force multiplier for us.

We’re very excited about the progress that we’ve made over the past few years in terms of building out that defense and security relationship. We are also strongly committed to the idea that all of this region, the neighborhood around Greece, should be an area of economic cooperation. It should be a region in which partnerships seek to build energy security, economic prosperity. We’ve made very clear regarding recent developments in the Eastern Mediterranean that coercion, threats, and intimidation, military activity, are not going to resolve the issues, as the State Department said just a few days ago.

Those were all ideas that were reflected in the really historic visit that my boss, Secretary of State Pompeo, paid two weeks ago to Thessaloniki and Souda Bay. In particular, the conversation in Souda Bay with the Prime Minister, Minister Panagiotopoulos, Foreign Minister Dendias, and the Chief of Defense General Floros, made clear the commitment of both sides to continuing to enhance and deepen our strategic defense and security partnership. As Secretary Pompeo has said, we consider this one of our strongest defense relationships in all of Europe, and we want to make it even stronger. We have agreed on the principle of expanding and deepening our Mutual Defense Cooperation Agreement (MDCA) to help both of our countries maintain strong, capable and interoperable militaries.

It’s a happy coincidence that we’re having this conversation at the same time that my colleague, the State Department Assistant Secretary for Political-Military Affairs, Clarke Cooper, is here in Greece. He’s had a terrific round of discussions over the past two days with the Minister of Defense, Minister of Foreign Affairs, with the Prime Minister’s Office, with General Floros, and with the opposition SYRIZA.

The message in all of those discussions has been clear: that the United States is committed to our Alliance relationship with Greece, and that both sides are committed now to building on the strong foundation we’ve laid through our Strategic Dialogue and our expanded MDCA to even deepen further our mutual security. I’m delighted also that Assistant Secretary Cooper will continue on tomorrow to Souda Bay, which I often have talked about as the flagship of our defense and security cooperation.

Another aspect of that cooperation in which AmCham has played a valuable and leading role is the work of American industry. In that regard, we of course appreciate greatly the fact that Greece continues to meet its NATO Wales Pledge of spending 2% of GDP on defense. And we’re also very excited to see how American industry continues to play a leading role as a partner for Greece — whether it’s the Lockheed Martin F-16 and P-3 upgrades; General Atomics’ potential cooperation on the MQ-9s; Raytheon’s work on electronics; Pratt and Whitney’s work on engines; Honeywell’s engine upgrades for the Army’s Chinooks; Erickson’s firefighting helicopters. There’s just a lot going on here.

There are important new programs that have now emerged as well, including the MH-60 Romeo anti-submarine warfare helicopters, Hellenic Army vehicle modernization. And I think what I’ve emphasized through all of this, and Minister Georgiadis alluded to it in his comments about Hellenic Aerospace: even through the worst of the economic crisis, American industry has been a strong partner for the Greek Ministry of Defense. And, as reflected in all of the programs I’ve just alluded to, our industry is here for the long haul, and is looking now to work with the Greek government as the Prime Minister seeks to modernize Greece’s defense capabilities.

We paid special attention to the Prime Minister’s announcement from Thessaloniki last month, the intention to acquire four new frigates. We think the United States is going to have a very competitive product to offer there with our frigates, and the unique American proposal to co-produce three of those frigates here in Greece. That co-production proposal reflects a long-standing American industry approach to working with Greek industry, and is especially well-timed in the context of something Minister Georgiadis and I have been working on, which is the efforts by the American company ONEX to revive the Greek shipbuilding industry, already begun in Syros, and now looking to Elefsina.

We’re very excited about the fact that ONEX, supported by the U.S. Development Finance Corporation, is moving ahead with the acquisition of the Elefsina shipyards. We hope that will be finalized by the end of this month, October. And we see this as a way to enhance Greece’s capability to provide support in particular to the energy industry, but also to work with the U.S. Navy. ONEX has already been certified by the U.S. Navy to provide U.S. services, to provide maintenance and repair, ship services at the Syros shipyard.

And we had a U.S. Navy International Programs Office team here in Athens just a few weeks ago, which had a very successful round of discussions with ONEX, visiting the shipyards, seeing the capabilities there. And they came away absolutely confident that if the Greek state goes with the American frigate offer, that the United States and the U.S. Navy IPO will be positioned to implement a co-production approach to that strategically important project, a project which is important to Greece’s long-term security but also advances America’s interests in helping Greece to continue to be a strong and effective NATO partner in a geopolitically complicated neighborhood.

American companies are investing in Greece. We talked about that already in the technology space, but it’s also happening in defense. And we’re committed to continuing to support that in every way possible.

Finally, I want to emphasize that our relationship is not just about defense sales, it’s also about building the interoperability of our forces. I’m very proud about what we’ve accomplished over the past few years, in particular following the expansion of the MDCA to incorporate new facilities at Larissa, Stefanovikio, and Alexandroupoli. How we’re doing more than ever before with our militaries exercising together. We’re going to see that later this month as the 101st Combat Aviation Brigade comes back to Stefanovikio for its now annual winter rotation. I was really encouraged to hear General Floros talking about the opportunities that that creates for the routine deepening of interoperability and the defense ties between our countries that are so important to our Alliance.

And then of course we have the really exciting announcement which Secretary Pompeo made when he was in Souda Bay, that the home port for the U.S. Navy’s newest ship, the USS Hershel “Woody” Williams, an expeditionary platform ship, will be at NSA Souda Bay, which underlines the geostrategic importance of that location, but also the fantastic support that we get from our Hellenic Navy and Hellenic Air Force hosts at NSA Souda Bay.

So let me conclude by emphasizing, first of all, my gratitude for the partnership that we have built with all of our counterparts across the Greek government, but also my commitment to continuing to deepen the ties that we already enjoy. We’re doing that every single week. We’re doing a lot of it this week in the military domain with Assistant Secretary Cooper’s visit. And I’m confident that we’ve got even bigger and better things lying ahead of us.

So thank you, and I look forward to the rest of the conversation.