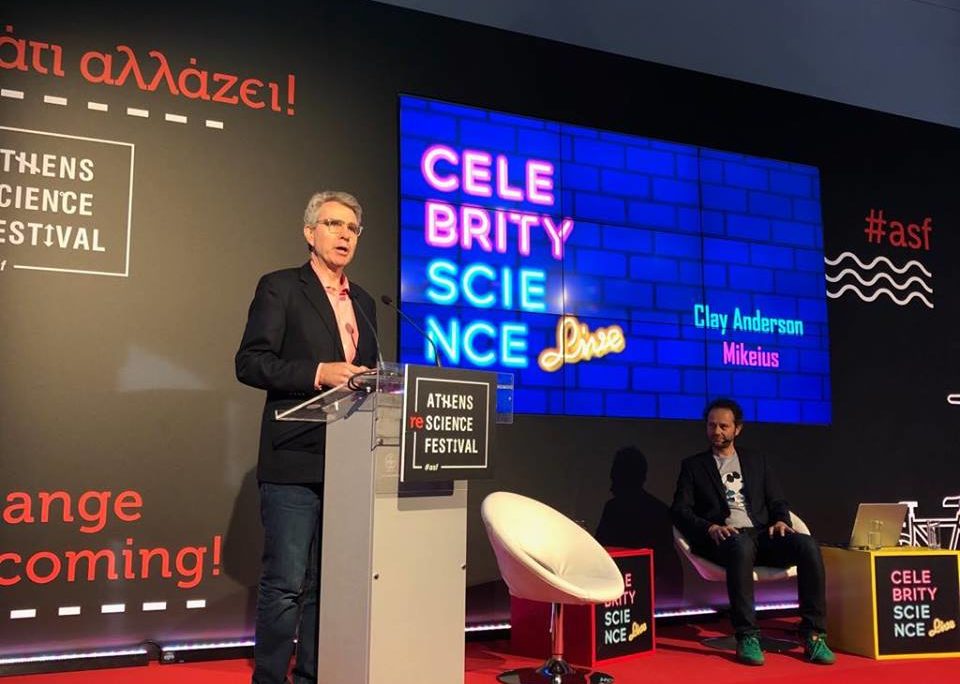 Theo, thank you. It’s really great to be here. This is my third year at the Athens Science Festival.

It’s always incredibly exciting to see the exhibits, to see all the interaction but especially the energy of the Greek young people.  So, congratulations on that.

I’m especially proud that the American Embassy is again helping to support the Science Festival.

We have an Escape Room, which I hope you have all discovered, which looks at challenges of pollution and what to do about it.

There is also the  “Planetarium on the Go” which is just around the corner here. I encourage everybody to check out the film there, which focuses on NASA and the work that NASA is doing with the International Space Station.

But the real heart and soul of our presence at the Science Festival this year is the opportunity that we have had to bring Clay Anderson and his wife Susan here, a real, live, American astronaut, somebody who’s going to share with you his experience in space.

And I think it’s worth remembering that we’re coming up on a very important anniversary.

This July will be the 50th anniversary of the Apollo 11 mission that first put a man on the moon.

I’m ashamed to say that it’s actually one of my first television memories, is staying up much later than I was normally allowed to as a young kid to watch on a little black-and-white TV screen as that first moon landing took place.

Since then–and it’s important to remember how unique it is to have had this experience in space.  There are only 12 human beings in history who have had the opportunity to go to the moon.

And Susan was sharing with me the total number of astronauts who have been in space is only about 600.  So, it’s an incredible privilege for us to have Clay here.

I’m also very glad that he and Susan, first-time visitors in Greece, have been able to get to know a little bit of this country. So, welcome.

I’ll just wind up with saying two other things:

One, you all saw, I hope, just last week the very exciting news that our Vice President announced that the United States is again gonna send a mission to the moon with the goal of landing at the pole of the moon by 2024.

So that’s going to produce a lot of science and a lot of new exploration. But the thing that’s really important to remember is that today, space exploration is by definition an international undertaking.

We’re very proud of the partnership between the Hellenic Space Agency and NASA, and there’s more happening in that area, but it really takes the whole world to do what needs to be done in terms of putting human beings in space and taking advantage of the opportunities and the challenge that space presents.

So, Theo, I want to say thank to you, thanks to Julie, thanks to Stamatina. We’re very, very proud of this partnership, and I’m very excited about tonight’s presentation. So welcome, Clay.