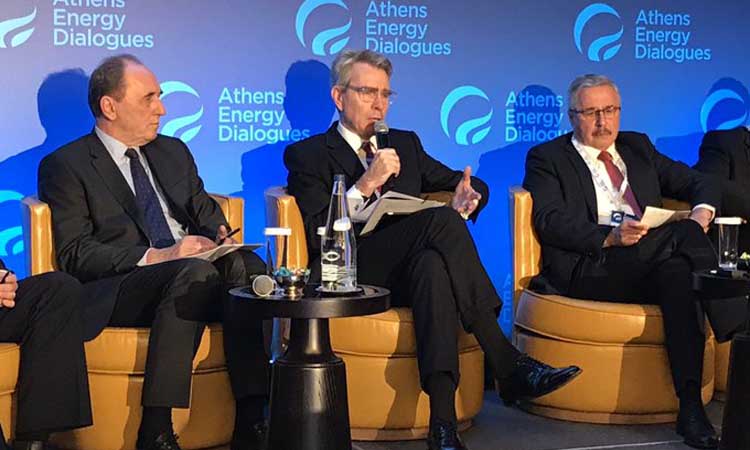 Ambassador Pyatt participates on a panel entitled, “EastMed Pipeline: A Game-Changer in the Making,” at the Athens Energy Dialogues. (State Department photo)

Good afternoon. Thank you, Alex, thank you, Symeon, for having me back here. This is a forum that I have addressed three times now, over three years. It focuses on a sector that has been a priority for me, for the U.S. government, for my Embassy, and an area that is truly one of the bright spots of the U.S.-Greece relationship today. It’s a special honor to be speaking with two former Ministers of Energy and the current Minister for the East Med, Minister Hatzidakis.

I think I can say safely that this is an area which in fact has been characterized by a fairly high degree of continuity from the Syriza government to the New Democracy government. And I think that reflects the predictability, the stability, that Greece has introduced into the energy picture in Southeastern Europe, which was a central focus of the Prime Minister’s fantastically successful 72 hours in Washington, D.C., earlier this month. Minister Hatzidakis and I were talking about all of the areas in which energy was a central focus of discussions with President Trump, with the Senate Foreign Relations Committee, with my boss, Secretary of State Pompeo and Vice President Pence.

There is an awful lot that we are doing together today, as allies and as economic partners, on the energy front. One central feature of that has been the contributions which Greece is making to energy diversification across Europe, in a concrete and measurable way, illustrated for instance, by the coming online of the TAP pipeline, a project which has been a priority of American foreign policy for more than two decades, and which, as the Minister noted, will be formally inaugurated here in Greece in the weeks ahead.

Likewise, we’ve seen tremendous progress, and a statistic which is not well-understood: last year, in Greece, for the first time, LNG exports exceeded gas imports through pipelines. So, Greece has become a larger LNG importer than pipe-gas importer. That reflects a dramatic transformation of global LNG markets in which Greece is playing a central and catalytic role. We also are strongly focused, as the Minister alluded to, on the successful implementation of the Alexandroupoli energy hub, reflected not just in the TAP pipeline, but also in the FSRU that Gastrade is leading. And while the Prime Minister was in Washington, we also had the important news that Bulgaria had announced its intention to both invest in the FSRU and also sign an off-take contract. Our team in Sofia is working very hard on that issue. And, of course, real progress on the IGB pipeline, which is yet another element in this emergence of Greece as a major Southeastern Europe energy hub.

I see the East Med pipeline, which we were asked to talk about today, as simply one more facet of that larger phenomenon. I should emphasize first and foremost, the strong support of my government for this emerging alliance between Greece, Israel, and Cyprus, collaboration on a broad range of issues. We have contributed to that process through Secretary of State Pompeo’s participation in the 3+1, through the 3+1 Energy Dialogue which began under Minister Hatzidakis’s leadership with my colleague Frank Fannon last August. It’s reflected in the work of our Congress. The East Med Act which was signed by President Trump just before Christmas, pushed by Senators Rubio and Menendez in particular, places a major focus on energy cooperation and American government support to energy cooperation in the Eastern Mediterranean. So, this is a long-term undertaking, but it is fully consistent with everything else that is happening in the transformation of the geopolitics of energy, but also the central role that we see Greece playing in the larger American strategy for deepening energy security in Europe and helping Europe to diversify away from dependence on Gazprom and Russia’s use of energy as a strategic weapon.

The last point I would make here, it’s not the focus of this East Med discussion, but I do want to underline something that the Minister referred to, and which I’ve also worked on with Minister Stathakis. And that’s the very important role of American energy companies in the renewable sector, wind, solar, and also storage. There were some very good meetings with the Prime Minister was in Washington with American companies that are active in this sector. Well-known American companies like GE, of course, are already present here, but I think you will see the further expansion of the American footprint in Greece also in the renewables sector. And very much supportive of this vision of Greece as being a regional hub and a country which contributes to prosperity and stability across the wider region.

The one thing that I won’t talk about here, because I know we’ll get to it in questions, is Turkey. But here, too, I would simply emphasize the great confidence that the United States has in the role that Greece is playing on this issue right now, and the great success that the Prime Minister had when he was in Washington, D.C., in impressing upon American political leaders the positive and stabilizing role that Greece continues to play.

So, again, thank you for having me back. I very much look forward to the dialogue this afternoon, but even more importantly, I’m continuing to drive forward this issue as really one of the central pillars of U.S.-Greece strategic cooperation and a fantastic example of how Greece has transformed itself in recent years into a key pillar of stability and a contributor to prosperity across a much wider European scenario.