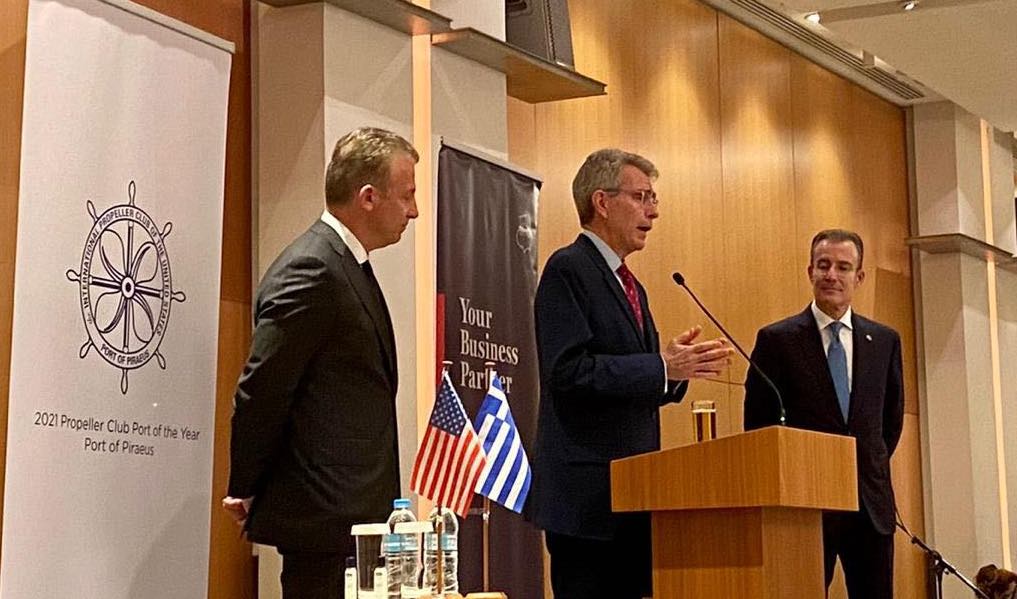 Let me start by thanking my friends, both Nikos and Costis for those incredibly generous and gracious remarks.  But I also want to assure everybody that after having done five of these AmCham-Propeller Club Thanksgiving Dinners, I know that nobody comes here to listen to me speak so I’m going to try to keep this relatively short.

I’ve said before, for me and for so many Americans Thanksgiving really is a favorite holiday because it embodies so many of the values that we hold dear, and most importantly the closeness of family, the opportunity to reflect, and the importance of gratitude.  And of course taking the opportunity to sit down with friends and family to enjoy a meal, to look back on the year that’s past, to look ahead to the holidays that will come, and also to share the things that we hold closest.

As I was thinking about my remarks for this evening and what I was thankful and grateful for, it was clear that of course the thing that I am most grateful for is the fact that this year we can all gather together after what has been a very difficult 20-plus months of the pandemic.

So in that regard I want to begin by raising a toast to all the scientists, the clinicians, the researchers, the lab workers who have accomplished the miracle of the vaccine.  And I think since this is an AmCham event I can go even further and offer a special personal thanks to my friend Albert Bourla, to the teams from the two AmCham companies that contributed to this vaccine miracle – Johnson & Johnson and Pfizer who are working here in Greece.  And of course the Greek toast of “stin yasas,” has never been more appropriate.  So let me begin by asking all of us to raise a toast to those who brought us the miracle of the vaccine.  Yia mas!

But I have to say more.  The fact that we’re able to gather here this evening, of course, is also a testament to the smart approach that Prime Minister Mitsotakis and his team have taken really since March of 2020, the first days of this pandemic, in shaping a smart, science-based response.  And I know I am personally incredibly grateful for the wisdom that he showed, but also his team.  My dear friend Minister of Health, now Minister of Tourism Kikilias, Minister Pleveris, but also importantly all the work that was done on the technology side.  Minister Pierrakakis and his team at the Ministry of Digital Policy.  And all of the American AmCham member technology companies that contributed to the smart, science-based approach that the government used to shape its response.  Microsoft, Google, Cisco, Amazon Web Services, IBM, and so many more.  I am so, so proud to have the AmCham member companies step up to support the government’s response to this terrible challenge.

But I also want to say how proud I am that AmCham and our partners, AmCham and Propeller, were able to keep this relationship and the people to people aspect of the relationship moving ahead even through the past 20 months.  The fact that Greece really distinguished itself by continuing to establish a record reform and economic transformation even through the challenge of the pandemic.  It’s had a dramatic impact on the reputation that Greece enjoys, certainly in the United States.  You see that from investors.  It was so clear to me last month when I was in Washington, DC with Foreign Minister Dendias and the team for our Strategic Dialogue.

Speaking of the Strategic Dialogue, I want to emphasize how proud I am of the conversations that took place last month in Washington and the clear message which the Biden administration conveyed to Prime Minister Mitsotakis’ team –that we’re not done yet.  That we’re incredibly proud of the progress we’ve made but that we have a very, very ambitious vision for the future.

No aspect of that flourishing relationship has seen more transformation than the work that our defense forces do together.  I want to acknowledge the presence here tonight somewhere of Captain Mike Barry.  Mike and I were out this morning with General Floros and all the chiefs watching our Special Forces work together in Revithoussa, arm in arm, brothers in arms, building and strengthening our security ties.  It’s just so fantastically impressive to see how far we’ve come, but also to hear the clear message from General Floros and his team that by no means are we done yet.

This has also been the year when we have added new elements to the vocabulary of our cooperation.  No aspect of that is more significant than the way in which our two governments worked together in the aftermath of the terrible fires that struck Evia, Athens and ancient Olympia in August.  None of us who lived through that will forget those two weeks.  But I must say I’m so, so proud of the way that the U.S. government responded to the challenges and the way in which we’re working together to shape a future agenda for cooperation and how we build resilience to manage the impact of the climate crisis.

Finally, I just want to say a quick word about how grateful I am for my team at the U.S. Embassy in Athens.  I think all of you from AmCham, from Propeller, who work with the different sections of the Embassy understand how privileged we are to have such an exceptionally talented, resilient, hard-working and visionary team.  And I can tell you, we would not be where we are today in the U.S.-Greece relationship without dozens of people across the mission pulling together in pursuit of a common vision.  So to David, my Deputy, and the rest of the team that’s here this evening, thank you guys so much.  I’m incredibly proud of what we’ve accomplished together and I know that I am leaving this mission in a position to continue to excel as we look into the future.

It’s been a difficult two years since the last time we gathered for one of these events.  Some of you during that time have lost loved ones, some of you have fallen ill, all of us have been challenged by the way in which the world around us has changed.  We’ve had to reevaluate where we place our priorities, how we spend our time, how we allocate the attention that we give to our family to our work, to our colleagues.

So tonight’s gathering is all the more special, knowing what we’ve been through and what it represents for all of us.

In the United States, as was said in some of the earlier comments, Thanksgiving is essentially a family holiday.  That is the defining aspect of it.  And I will say, speaking for Mary and I, we consider all of you, the members of AmCham, the members of the Propeller Club, part of our extended family here in Greece.  I promise – I can’t tell you when we’re leaving.  I know it won’t be until 2022.  But I can promise that whenever we leave we will take a piece of Greece in our heart and we will be back.