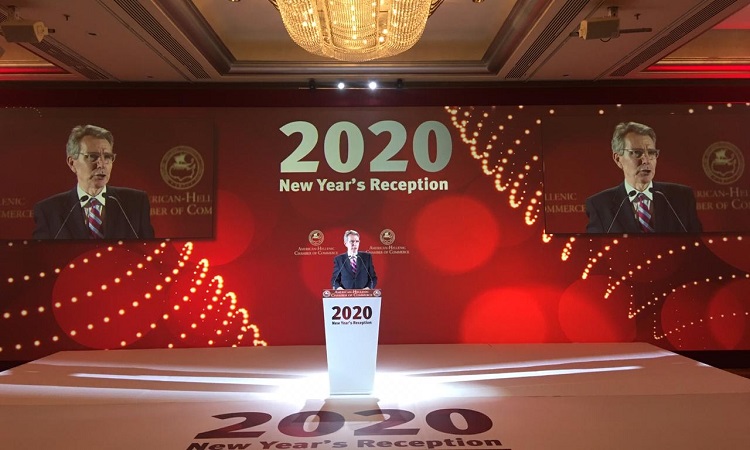 Καλησπέρα σας. Χρόνια πολλά! Thank you, Niko, I want to begin, first of all, by acknowledging our friends who are here tonight, in particular, Minister Georgiadis, also Minister of Tourism Theoharis

I have learned over four years that I need to keep my AmCham pita remarks short, but I don’t want to let this night go by without properly thanking the AmCham, Nikos, Elias, Litsa, Alex, and everybody else for the fantastic cooperation that we’ve had.

A lot has already happened in the US-Greece relationship in 2020, highlighted by the Prime Minister’s fantastically successful visit to Washington, DC.

It was among the warmest receptions of a foreign leader that I have seen in the United States in my 30 years as an American diplomat, and a lot of that was the result of the hard work that we have done together.

Vice President Pence put it very well when he spoke about the “unbreakable bonds between our countries” that “have contributed immeasurably to the life of this nation and still represent the core of what binds us together.”

At last year’s pita cutting, I urged Greece to institute reforms and build the foundation for more American investment. In 2019, we saw fantastic progress: Minister Georgiadis’ development law, the end of capital controls, the fast-tracking of the Hellenikon development project, and AmCham’s continued leadership at the Thessaloniki International Fair, along with the announcement of several new U.S. investments in Greece by Pfizer, Cisco, Deloitte, Tesla and many others.

I also want to congratulate AmCham on their new partnership agreement with the Atlantic Council that facilitates their important work on energy.

I was incredibly proud in Washington that Vice President Pence and Secretary Pompeo recognized the Greek government’s accelerated, forward-looking reform agenda. So, thanks to the good work we’ve done together, the stage is set for a fantastically productive 2020, and many exciting opportunities lie ahead.

I’m optimistic that 2020 is going to bring significant American investment and big ticket projects like the privatization of key ports, starting with Alexandroupoli and Volos, as well as other energy and tourism infrastructure projects including Hellenikon, one of the biggest American investments ever to come to Greece, and of course, to continue building on our fantastic success of ONEX’s project in Syros to see the revival of the shipyard at Elefsina.

I will be in Thessaloniki in a couple of days for their AmCham pita cutting, where I’ll talk about the opportunities there and the role of northern Greece as an energy hub and a gateway to the Balkans.

We are very committed to building on the positive investment announcements from Pfizer, Cisco, Deloitte and further growth of the American corporate presence in northern Greece.

I know that behind every one of these successes is a great deal of planning, cooperation, advocacy, and hard work, so I want to express my appreciation to all of you. My team and I look forward to working with AmCham and all of its members to see even greater success in 2020.

So, let me close with a quick toast to Nikos and AmCham, for all the work they’ve done over the year, for the great strides we’ve made in our bilateral relationship, and for the confidence we share that in 2020 we will look back and see a year of major growth in U.S. investment in Greece.

I wish everyone a profitable and happy new year. Καλή χρονιά!