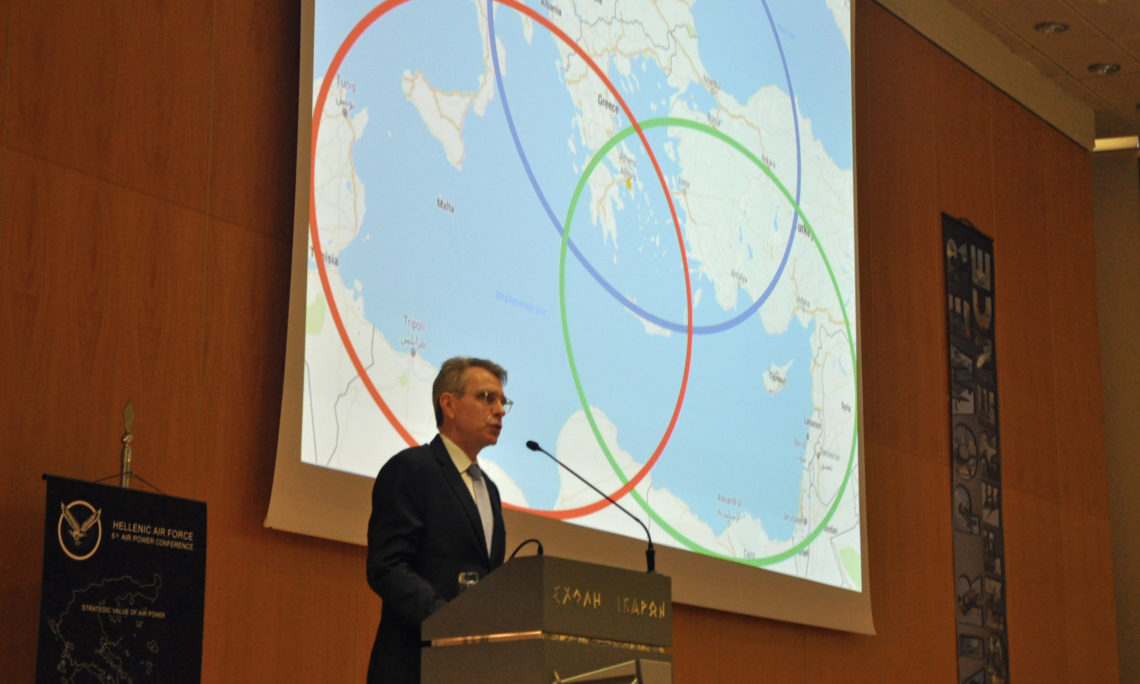 Kalimera, and thank you General Christodoulou for the warm welcome and for hosting today’s event. Admiral Apostolakis, distinguished guests, it’s a great honor for me to be here with you at the Air Force Academy.

I want to start by congratulating General Christodoulou and the Hellenic Air Force for what you have accomplished in developing the Air Power Conference as a venue for military and civilian leaders, along with industry partners to exchange knowledge and identify strategies to advance our shared interests and enhance our collective operational capability and readiness.

The effort that General Christodoulou, the Hellenic Air Force, and the Ministry of Defense have put forward to gather military counterparts with diplomats, academics and defense industry leaders from across this region is another example of how Greece is taking a leadership role and serves as a pillar of regional security.

I should also note how deeply impressed I was by Deputy SACEUR General Everard’s comments yesterday at the opening session and his very thoughtful presentation of the challenges our Alliance confronts in a rapidly shifting security environment.

The topic that I have been asked to address
— not just the use of the military in times of peace, but how we can use our militaries to keep the peace –is both important and extremely relevant to this role that Greece has on NATO’s Southeastern Flank.

One of the great honors of my two Ambassadorial tours — in Ukraine from 2013-2016, and now in Greece – has been the close partnership I have enjoyed with counterparts at EUCOM and its component commands.

And especially after February 2014 when Russia’s invasion of Ukraine turned Embassy Kyiv into a war time posting – I have grown to respect even more the capabilities and diplomatic vision of my American military colleagues bring to the policy table. Indeed, as Colonel Fakitsas reminded us in his introduction of yesterday’s first panel, the primary purpose of a military force in peacetime is to ensure that diplomats negotiate from a position of strength. And in that regard, I as a diplomat, and you as military leaders, share a common vocation focused on ensuring peace and security for our citizens.

Last week, this quest for regional peace and security was the focus of discussion at our High Level Consultative Committee, chaired by Minister Kammenos and a large delegation from the Pentagon and State Department. Just before that, General Christodoulou and Admiral Apostolakis met with General Tod Wolters, commander of the United States Air Forces in Europe (USAFE), Air Forces Africa (AFAFRICA) and NATO allied air commander, where they discussed many of the same themes, as well as the further strengthening of our air force to air force relationship.

The peacetime role of our militaries can also be seen in our commitment to NATO, our regional military partnerships, and the various ways in which peacetime militaries and regional institutions are helping to advance security and stability.

I want to emphasize that the United States remains committed to all of these alliance relationships. It is in America’s interest for our allies to be strong, sovereign, prosperous, and committed to the advancement of our shared values and ideals. We are absolutely committed to the security guarantees to our allies. Since spring 2014, when Russia’s invasion of Ukraine shifted our threat assessments, the U.S. military has conducted continuous multinational training and security cooperation activities with Allies and partners in Eastern Europe to improve interoperability, strengthen relationships, and build regional stability.

For instance, here in Greece, the U.S. is assisting by providing U.S. defense solutions to keep Greece’s military modernized and capable so they can continue being a stabilizing force diplomatically and militarily. I know from my many conversations with US military colleagues how much they respect their Greek counterparts as capable partners that can tackle the numerous challenges in Greece’s complex neighborhood.

As it has for centuries, Greece today also serves as a bridge between East and West, North and South. This role is growing more important as a unifying connecting force in the Eastern Mediterranean and Southern Flank.

Greece recently has taken new initiatives to create new alliances and is convening an ever broadening group of regional partners with a mutual interest in security, stability and prosperity. In this regard the United States strongly supports the Greek trilateral efforts with Israel and Cyprus, the Greece-Egypt-Cyprus trilateral, and other emerging dialogues led by Athens across the Eastern Mediterranean and Balkan/Black Sea regions.

I was reminded of Greece’s unique network of relationships last month when I was able to visit Andravida Air Base for the DV day at the INIOHOS exercise, where the Hellenic Air Force had convoked an impressive array of partners that don’t usually fly and train together.

And I know after speaking to my U.S. Air Force colleagues, that our pilots who were at Andravida were deeply impressed by their Hellenic Air Force counterparts, and by the quality training opportunities that the exercise provided, demonstrating the tactical proficiency and operational capacity of our partner nations.

This example stands as a testament to how peacetime militaries working together promote regional stability and peace through cooperation and training. So, I’d like to congratulate General Christodoulou again and the rest of the Hellenic Air Force for the initiative in developing this unique forum at Andravida.

Another demonstration of our mutual commitment to using our militaries in peacetime for collective security is Atlantic Resolve, a series of Allied military actions designed to reassure NATO allies and partners of America’s dedication to enduring peace and stability in the region in response to Russia’s invasion of Ukraine.

Last year, Greece contributed to the success of Atlantic Resolve by enabling a substantial portion of the 10th Combat Aviation Brigade to enter the European theater through the port of Thessaloniki and to depart through the port of Alexandropoulis. As a result, the Alliance’s logistical capability, interoperability, and ability to mobilize resources was efficiently and fully on display.

This effort also demonstrated a better and innovative way to use existing resources here in Greece to achieve military mobility – one of our most important shared objectives – and something that we plan to continue doing in the future.

A final relevant example of military force in pursuit of diplomatic objectives was last week’s US/UK/France joint airstrikes against chemical weapons facilities in Syria.
I worry that sometimes it gets lost in the Greek press coverage that this action was a proportionate and limited response to President Assad’s illegal and unacceptable use of chemical weapons against his own people. As President Trump made clear, the purpose of this military action was to degrade the Syrian military’s ability to conduct further chemical weapons attacks and to dissuade the Syrian government from using or proliferating chemical weapons.
Nothing more, nothing less.

I also want to take a moment and stress how grateful we are for the support that the Greek government provides through NSA Souda Bay. It is an indispensable facility supporting the operations of the 6th Fleet in the Eastern Mediterranean that embodies our close ties and shared goals as we face common challenges. Because of what’s happening in the neighborhood with the counter-ISIS campaign in North Africa and the campaign to destroy the Caliphate in Syria, Souda is busier than it has been in a very long time, and supports all four of the US component commands that operate in the Eastern Med region.

Souda Bay is also an important platform for cooperation on regional, bilateral and multilateral exercises that keep our militaries prepared and interoperable in peacetime. Toward the end of this month, we’ll see another great example of Souda’s role as we begin the Phoenix Express multilateral maritime exercise.

The US strategy for our diplomatic and military engagement with Greece is simple; the stronger Greece is and the healthier its economy is, the more Greece can act as a stabilizing force for good in the wider region: whether we’re talking about the Eastern Mediterranean and the quest for peace in the Middle East, or North Africa, and the battle to defeat ISIS; or the Western Balkans and Black Sea region, and the shared agenda to build a Europe, whole, free and at peace.

These are our key objectives in the region and serve as the primary focus of our military and diplomatic efforts in peacetime. Thank you very much for inviting me and I would be delighted to take any questions.