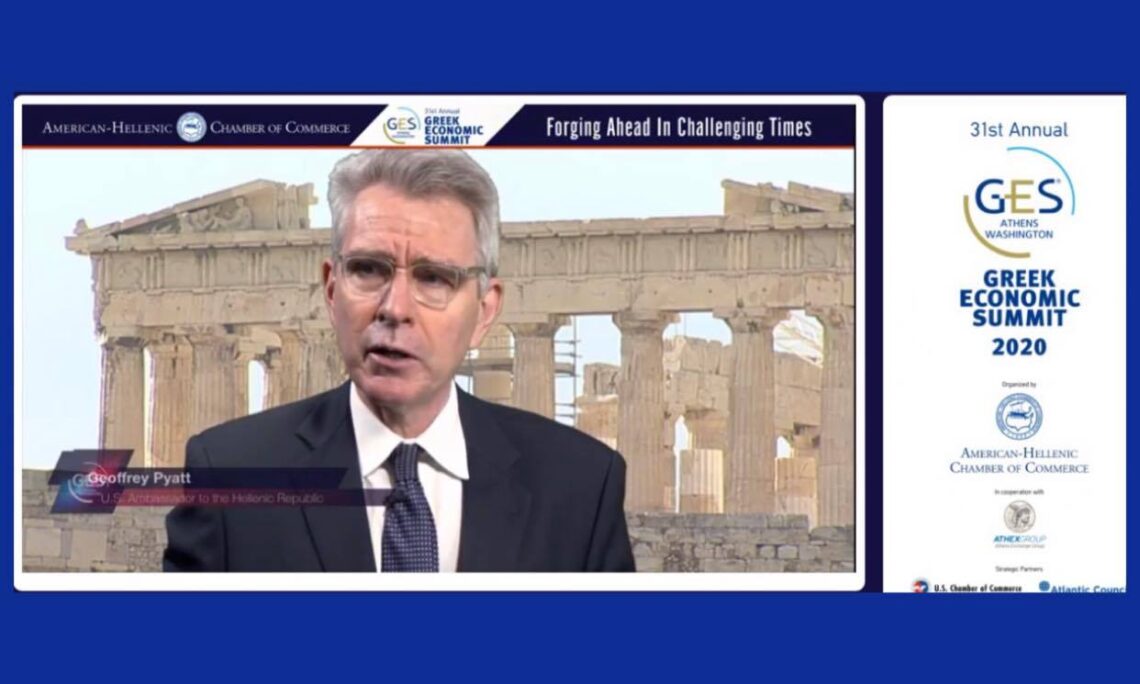 Thank you, Niko, both for the invitation and also the warm introduction. I’m delighted to be speaking at another Greek Economic Summit. This is my fifth Summit, and though we’re convening under very different circumstances this year, I want to congratulate you, Elias, and the team on a fantastically impressive lineup of speakers, which I think reflects very well the strong state of the U.S.-Greece relationship.

I also want to thank the AmCham and the Hellenic Federation of Enterprises for their partnership during this unprecedented pandemic period. Despite the challenges, we’ve continued to work together to drive U.S.-Greece relations forward, as reflected in events like this and the very important role that AmCham played in Secretary Pompeo’s visit to Thessaloniki in September. I’m very confident that this progress is going to continue as we move into the post-pandemic recovery and a very important presidential transition in the United States.

On this, I would start by noting that the U.S. election last month was an extraordinary exercise in democracy with more Americans voting than ever before in our history. Our election reflected the best of the ancient Athenian ideals that inspired our founders, and I’m positive that U.S.-Greek relations will continue to enjoy strong bipartisan support in Washington.

President-elect Biden has named a national security team of committed Transatlanticists who know Greece well, and I know that they will be able to build on a very solid foundation of strategic relations that we have constructed over the past several years.

I’ve said it different ways in the past, but I remain a true believer in the value of the U.S.-Greece relationship, and I am as confident as ever in our future.

Prime Minister Mitsotakis and his team are positioning Greece to recover quickly from this year’s pandemic-induced global slowdown.

Together, we are creating strong synergies between top-tier American investors and Greece’s highly educated workers that will act as a force multiplier in the years to come.

Our growing collaboration in the digital sector and our investments in energy and infrastructure are building on each other to create more opportunities and more jobs, ensuring greater security, stability, and prosperity in the Eastern Mediterranean.

Let me take a few minutes to share some thoughts on Greece’s digital transformation.

As our partners at AmCham will remember very well, the idea of bringing the very best of American technology and innovation to the 2018 Thessaloniki International Fair was a bit of a gamble, but we’re now seeing the fruits of those labors.

Over the past two years, American technology investment in northern Greece has led the way, putting Thessaloniki on the map as a gateway to the Balkans. U.S. companies like Pfizer, Cisco, and Deloitte have expanded their footprint in the city, and I am confident that more companies will follow suit.

I had a chance to meet Cisco’s Digital Transformation and Digital Skills Board last month, and we discussed their plans to promote innovation, investment, and women’s empowerment in cooperation with the Ministry of Digital Governance, the Ministry of Development, and the City of Thessaloniki. I was very impressed.

We believe the trend of American investment in Greece’s knowledge-based economy is just beginning, and with this agreement in place, there will be expanded opportunities for collaboration in moving technology from the laboratory to the marketplace, an area where American companies and researchers excel.

We’re acting quickly to follow up this agreement, and that’s why the State Department’s Science and Technology Adviser Dr. Mung Chiang traveled to Athens last month to meet with Minister Pierrakakis, Minister Georgiadis, and innovators at Demokritos.

Prime Minister Mitsotakis and his government are sending all the right signals to indicate that they are embracing the Greek economy’s digital future.

With its recently passed Digital Governance Code, the government has demonstrated its commitment to reforming laws and regulations and creating a political culture that facilitates digital transformation.

Greece is also ahead of the curve in recognizing the far-reaching impact of 5G wireless technology on every aspect of our lives, from national security to economic development.

COSMOTE’s decision to build its 5G network exclusively with trusted vendor Ericsson ensures that the data and networks that power Greece’s digital economy will remain secure.

We are very proud to welcome Greece to the Clean Network and look forward to the launch of COSMOTE’s 5G network in Attica and Thessaloniki this spring.

Capitalizing on the increased speeds that 5G will unleash, the Greek government’s new Faistos Fund will support the development of innovative applications for 5G technology. This fund will further deepen U.S.-Greece cooperation on emerging technologies since the government is encouraging U.S. investors to join the fund and welcoming U.S. startups to come to Greece to take advantage of this seed money.

As a result of Greece’s digital revolution, America’s leading technology firms, the global frontrunners in cloud technology, are placing huge bets on the future of remote work in Greece.

The new, cloud-based investments will help to attract a growing class of digital nomads who need access to their applications in real time. I know that this new technology push, combined with Greece’s renowned climate, food, and famously hospitable people, has enormous potential to attract highly skilled expats and to reverse the brain drain of recent years. The announcement last month of tax incentives for returning professionals and digital migrants sweetens this offer.

The U.S. Embassy has also invested in teaching young Greeks critical digital skills through programs like the Tech Academy, Tech Camp, and Code Girls. These are long-term investments in Greece’s future, and we know that a highly skilled workforce will have multiplier effects in the Greek economy.

You can envision an entire lifecycle powered by these investments. For example, when a Code Girls participant graduates from Anatolia College, maybe she gets her first job at Deloitte’s Center of Excellence in Thessaloniki. And from there, she might go on to start her own company using Microsoft’s cloud infrastructure, which is later acquired by a Silicon Valley firm.

Together, we are creating an enabling environment where there are more paths to success and young people can drive sustainable, long-term economic growth that pays dividends for years to come.

I’ve met talented Greeks in universities, laboratories, and startups all across this country, and I know they are capable of extraordinary things. One only has to look at the success of the Greek diaspora in the United States, personified by Pfizer CEO and Thessaloniki native Albert Bourla, whose vaccine is leading the global fight against COVID-19.

American investments in digital research and skills development will help Greece to position workers in this new professional landscape and grow into a regional hub for innovation and entrepreneurship.

One other way that the United States is contributing to the Greek economy is through U.S. investments in energy and maritime infrastructure.

Greece and its neighbors are coming together to redraw the energy map of Southeastern Europe through major projects that have maintained momentum even through the pandemic.

Regional cooperation here is key. That’s why we are committed to continuing the 3+1 energy dialogues with Greece, Cyprus, and Israel that Secretary Pompeo launched in 2019. As in the digital sector, synergy between these energy initiatives will multiply their economic impact.

The Trans Adriatic Pipeline, of course, has completed construction and will begin commercial operations by the end of the year, marking a new era of energy independence and diversification in southeastern Europe.

Combined with the Greece-Bulgaria Interconnector, targeted for completion next year, the Alexandroupoli floating regassification unit, and new connections to North Macedonia, TAP’s completion enhances Greece’s role as a defender of European energy security. This fall, Greece and Bulgaria both became shareholders in the Alexandroupoli FSRU, and companies in Serbia, Bulgaria, and Greece made binding commitments for long-term gas purchases. Greece and North Macedonia are also in the advanced stage of discussions for an interconnector that could be extended to Kosovo and other markets to the north. Together, these coordinated actions will help to break Gazprom’s monopoly on the Balkan energy market and promote greater regional trade. This creates jobs and contributes to a more stable and prosperous future for Greece and its northern neighbors.

LNG, which will flow through most of these projects, is the gas of the future. It’s both cheaper and more secure than Russian pipeline gas. It’s also key to European efforts to reduce reliance on coal-based power and meet our shared climate goals.

For the first nine months of 2020, almost half of the LNG coming into Greece originated from the United States, nearly four times the amount imported in the same period of 2019.

We want to continue building on these trends, and we believe that the Alexandroupoli FSRU is perfectly positioned to further develop a North-South energy corridor.

The United States Development Finance Corporation – or DFC – has been an important player in this space, and I’m delighted that my colleague and collaborator, DFC CEO Adam Boehler will be speaking later today. DFC established its first international office anywhere in Belgrade to cover the Western Balkans and Aegean with the explicit goal of catalyzing private investment in regional integration.

DFC has identified the ports of Kavala and Alexandroupoli as strategic priorities because of their geographic location and synergy with key projects like the FSRU, TAP, and the South Kavala underground gas storage facility.

So we’re thrilled that two American groups have declared interest in the privatization of these ports. We are determined that these strategic assets should remain in Western hands. In addition, the Syros shipyard is now certified by the U.S. Navy to conduct maintenance of U.S. military vessels, and we continue to support ONEX’s efforts, in cooperation with DFC, to finalize the acquisition of the Elefsina shipyard. We’re also very excited about North Star Group’s offer to invest 700 million euros in the Skaramagas shipyard over four years. I am very proud that American companies and U.S. government have played such a central role in helping to revitalize a shipbuilding industry that has been central to Greek identity for thousands of years. It’s a symbol of the powerful, transformative work that our countries are doing together.

We warmly welcome Foreign Minister Dendias’s plans to associate Greece with this Initiative, which will enable Athens to unleash its full potential for expanding regional energy, infrastructure, and communications ties.

In line with the vision that Prime Minister Mitsotakis and his team have laid out, Greece has drawn increasing attention as a trusted and sought-after destination for American investment.

I’m confident that these investments in the knowledge-based sector, in energy, and in maritime infrastructure will work in concert to recharge and modernize the Greek economy, delivering profits, jobs, and opportunities not only for Greece, but for the Western Balkans and Southeastern Europe as well. This is a win-win outcome for all of us.

So as we forge ahead and work through the challenge of the pandemic, I take encouragement from these promising trends. And I am committed to ensuring that the U.S.-Greece trade and investment relationship continues to grow and deepen in the years ahead. And no doubt, in this effort, AmCham will be our most important partner. So ευχαριστώ πολύ, and Niko, I look forward to our conversation.