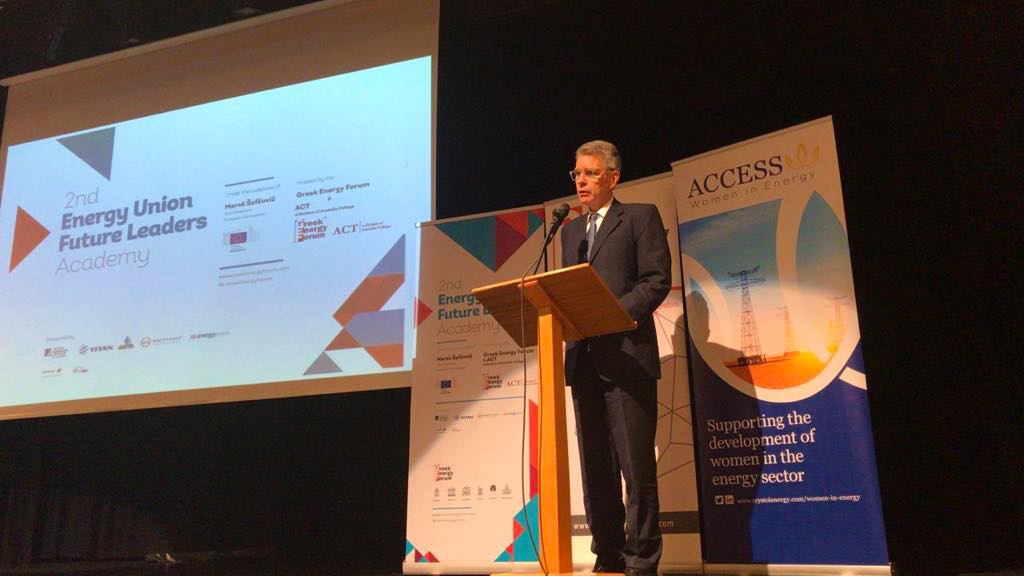 Let me start this short address by thanking the Greek Energy Forum and the American College of Thessaloniki for organizing this “Energy Union Future Leaders” Academy, bringing together young leaders from 18 countries to discuss the opportunities and challenges in the vitally important energy sector. I can’t think of a better location for this event than Thessaloniki, exactly at the moment that northern Greece is reestablishing its role as the commercial and energy hub of the Balkans. I’m also especially glad that this is happening on the campus of Anatolia College, which is really one of the hidden gems of the U.S. legacy of support in northern Greece, and I’m delighted to be on the campus on such a beautiful day.

Two of the Academy’s main objectives are the promotion of energy diversification and energy security, which happen to mirror priorities of the United States government. And I think the energy security of our European partners and allies has been a longstanding priority for the United States, but it’s only over the past few years, that Greece has become a real leader in these efforts. I know that the Greek Minister of Energy, Minister Stathakis, heard this message very clearly from our Secretary of State and our Secretary of Energy when he was in Houston last month, and Secretary Pompeo repeated a similar message when he recently participated in the first 3+1 summit meeting in Jerusalem with Prime Ministers Netanyahu, Anastasiadis, and Tsipras.

The starting point for regional diversification in this part of Europe is the Trans Adriatic Pipeline, which is 99 percent complete in Greece and ready to begin commissioning later this year and to start operations in 2020. The start of the TAP pipeline marks the completion of a $20 billion, multi-decade long effort, supported by the United States despite the fact that there is no direct American investment in the project, because it connects resources in the Caspian with European energy markets. TAP also represents the largest and most complex greenfield investment in Greece since the start of the financial crisis – and perhaps the largest such investment ever. In this regard, it’s quite important that TAP began under the aegis of a New Democracy government and will be completed under Syriza, reflecting the consensus support this issue of energy investment enjoys in Greek society.

TAP is an essential link in a series of projects to ensure diversified routes and supplies in Greece, Europe, and the wider region. But it’s not the whole story. Construction is also set to begin in the next few weeks on the Greece Bulgaria Interconnector, which will be an important further step to unlocking markets along the vertical corridor connecting Greece with Bulgaria, Serbia, and countries to the north. European Union support for the IGB and these other regional projects is absolutely key to their success.

Likewise, among the first economic beneficiaries of the Prespes Agreement are likely to be Greek energy companies and their counterparts from North Macedonia. Reopening the existing Vardax oil pipeline from Thessaloniki to Skopje for the export of refined product from the Hellenic Petroleum refinery will not only reduce costs and bring greater transparency to the sector, but it will also open up possibilities for expanding connections to North Macedonia’s neighbors. Likewise, connecting the DESFA gas grid with MER would be similarly beneficial for both countries, as would links between the Greek and North Macedonian electricity grids. And I know that all three of these efforts are well underway.

In addition, an expanded Revithoussa LNG terminal here in Athens has not only welcomed the first LNG shipments from the United States to Greece, but it has also doubled its utilization rate over the first three months of this year despite adding 40 percent more capacity with the completion of Revithoussa’s third storage tank. One big reason for this uptick is that the price of LNG has dropped well below the price of Russian pipeline gas, though I believe other dynamics are also at play.

This latest development demonstrates that the case for a floating storage regasification unit (FSRU) in Alexandroupoli is becoming more than just strategic, with LNG becoming the fuel of choice for many traders and operators. The United States will continue to provide maximum support for the Alexandroupoli FSRU, and I look forward to the day when a long-term supply agreement brings regular shipments of U.S. LNG to both Revithoussa and Alexandroupoli.

We are also seeing in Greece the expansion of renewable energy, where U.S. companies from GE to Tesla are pushing the boundaries of technology here. And I was glad earlier today to visit Raycap in Drama, a Greek company providing essential components to the global wind power industry, including GE’s turbines.

The U.S. is the best in the world at bringing together wind, solar and storage technology and connecting it with existing grids, and I am encouraged that several U.S. companies are looking at opportunities in this sector of the Greek economy. Increased use of renewables further expands the diversity of sources of supply and promotes a more competitive market.

Greece and its neighbors will also play an important role in developing next generation technologies that hopefully move us away from the dependence on pipelines. The TILOS project is being implemented by Eunice Energy, for example, demonstrating how an innovative hybrid system uses solar and wind, combined with a battery storage system, to meet the electricity needs of the 500 residents of Livadia on the Dodecanese island of Tilos.

In my three years in Greece, I witnessed dramatic changes in the energy market that demonstrate that the vision of Greece as an energy hub, a vision that we share with the Greek government and the European Union, is becoming a reality. At the same time that these market-shifting energy infrastructure projects are coming online and top-level research is underway in Greece, the country is also moving ahead with the liberalization of its own energy market to meet European standards.

While privatization progress has been slower than hoped, the government successfully privatized DESFA last year and is moving forward with other key energy assets in line with its creditor commitments. And as state-owned companies lose their monopolies and more companies enter the markets, this will promote competition and ultimately lower prices for consumers. In this regard, I hope the rebooting of the Hellenic Petroleum privatization will open opportunities for American capital also to participate in this key sector.

The same market dynamics also encourage companies to look beyond Greece’s borders to remain competitive. The creation of an Energy Exchange by the Athens Stock Exchange, EBRD, and several key energy companies, further promotes this dynamic by creating a regional trading platform for environmental certificates, electricity, and eventually gas.
The new infrastructure and technologies that result from diversification provide the region with options, and that introduces vital competition. But what’s clear to anyone who has followed European energy markets in recent years – and I’ve done quite a bit of that — is that there’s one actor who’s opposed to competitive, transparent markets, and that’s Russia. For this reason, the United States continues to strongly oppose Nord Stream 2 and a second line for TurkStream. These projects will deepen dependence rather than strengthen security. They are not commercial projects; they are political weapons that the United States will actively seek to prevent. Given the changing dynamics in the market, it is not clear why any nation would want to attache itself to an unreliable and less flexible source for a significant portion of its energy needs.

As Secretary Pompeo said in Houston last month, American energy does not have strings. He outlined the three ways that we promote energy security around the world. The first is though investment, which you see in Greece from ExxonMobil’s interest in the region – including off the coast of Crete in partnership with Total and Hellenic Petroleum – and from increased U.S. engagement in the renewables sector in Greece. The second means is by encouraging countries to partner with the United States around the world, as we’re doing through our America’s participation in the trilateral summit with Greece, Cyprus, and Israel. And the last is by pushing out bad actors who use energy for malign purposes. And in this case, we will continue to work closely with our European partners to ensure that Europe is not dependent on Russia as a sole supplier.

Greece – and here I want to wind up — is central to American and EU efforts to ensure diversified supplies and routes into Europe. The United States looks forward to continuing our close cooperation with Greece on energy issues, whether through our bilateral strategic dialogue, regional cooperative efforts, or through bilateral investment by American capital.

I want to thank again the “Energy Union Future Leaders” Academy, and I also want to thank you for bringing together this promising and diverse group of young leaders. I hope what you learn this weekend will guide you in creating a more secure and prosperous region, and I can assure you that regardless of what happens in domestic Greek politics over the next few months, the United States will remain a strong and vital partner in this area. Thank you very much.